Does health and happiness dip in your 40s? These seven simple changes could make a big difference

By Lisa Salmon
Surely mid-life – a point at which we’ve found success, be it personally or professionally, and figured out what we need – should be a time of contentment?

A recent study by researchers at Dartmouth College in the US, however, found happiness tends to dip to a lifetime low in our late-40s. The research, which looked at 15 fundamental measures of health and wellbeing – including fatigue, sadness, tension, anxiety, depression and sleeplessness – in people from all over the world, revealed a U-shaped ‘happiness curve’ which bottomed out from age 41-48.

“In midlife, the alarming fact is that despite what professional, material or personal success you’ve achieved after years of effort and dedication, as well as the miracle of kids for many and/or a wide social network, research shows happiness dips to a lifetime low,” says Dr Marc Bubbs, a performance nutritionist who works with professional and Olympic athletes and has just written new book Peak 40: The New Science Of Mid-Life Health.

Bubbs says this dip can bring significant adverse effects for our mental and physical health too. “It doesn’t have to be this way,” he adds. “Rather than drifting toward low energy, weight gain, joint pain and the like in your mid-30s and beyond, you can take action. Small changes, done consistently over time, are the secret to success – and not the latest fad diet, trendy exercise regime, or biohack.” 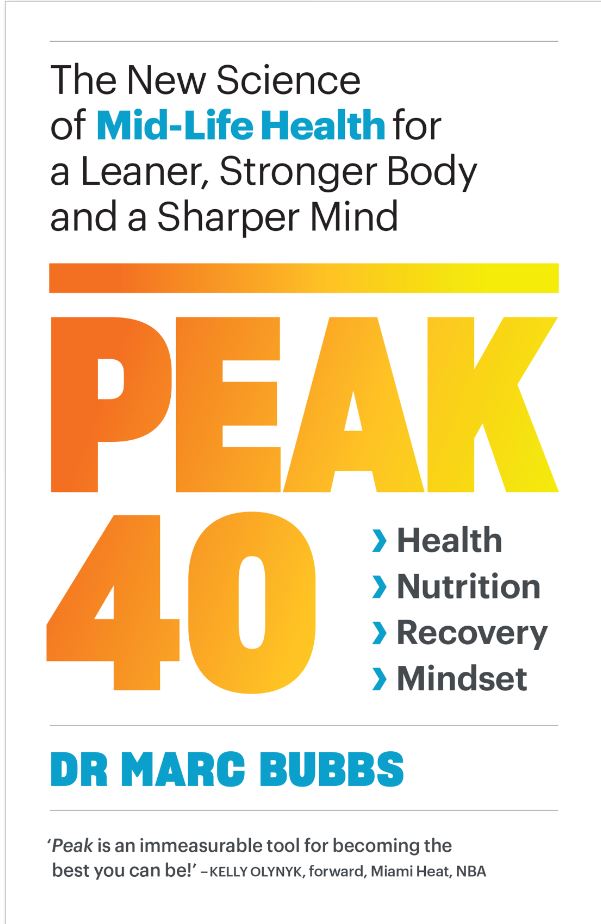 So, what sort of small changes are we talking? Bubbs suggests these seven simple strategies to help people approaching, or already in middle-age improve their health and wellbeing…

1. Get better sleep
Bubbs says the average person only gets six-and-a-half hours sleep per night, and 30% of people get less than six hours, even though the National Sleep Foundation recommends adults get seven to nine hours nightly.

2. Start with breakfast
Although getting your day off to a good start with the right breakfast can make a huge difference to how you feel and perform, most common breakfast foods – like juice, cereal, bread, etc – come in boxes and bags and are ultra-processed, calorie-dense and nutrient-poor, says Bubbs.

Breakfast is also the meal where we often consume the least protein, which is a problem for energy, focus and overall health, he adds. To reboot your breakfast, Bubbs suggests aiming for at least 20g of protein from eggs (or tofu scramble for vegans), yoghurt, milk (dairy or soy), or protein powder in a morning smoothie.

3. No late-night snacking on weekdays
It’s all too easy to grab a sweet snack at the end of a long, busy day, but Bubbs says: “All that snacking before bed is a key reason why you may be struggling with weight gain or poor health in mid-life.”

He says more than 40% of the calories we consume are eaten or drunk after 6pm, and they’re a “major roadblock” to a slimmer waistline, deeper sleep and recovery. “If you can cut out late-night snacking four or five nights out of seven – i.e. weekdays – you’ll be amazed at how much progress you can make, and you can still indulge a little on the weekends.”

4. Power up your protein
While protein is important for maintaining muscle, what often gets missed, says Bubbs, is that protein intake also correlates strongly with overall health and longevity. “People consuming a higher amount of protein see a parallel increase in their vitamin and mineral intake,” he explains. “It supports lean muscle, which is a strong marker of healthy ageing, and builds everything in your body from immune cells to hair, skin and nails, etc.”

Although the recommended dietary allowance (RDA) for protein is 0.8g per kg or bodyweight per day, Bubbs says some researchers believe this should be increased, and he suggests a daily protein intake of 1.2g/kg/day, pointing out that it’s associated with reduced incidence of loss of muscle and bone as we age, and better health.

It’s “highly unlikely” you can eat too much protein, he says, pointing out the upper end of protein intake is 3g/kg/day. “Centre your meals around protein and you’ll be amazed at the benefits.”

5. Movement is medicine
Bubbs points out that by middle-age, studies suggest a third of middle-aged adults don’t do any physical activity at all. “Exercise is a powerful tool for igniting better health, lifting your mood, building muscle and shedding body fat – especially in mid-life,” he says.

If you don’t exercise already, he suggests starting with gentle movement like yoga or tai chi, and building up to resistance training and/or aerobic exercise, perhaps starting with walking or cycling and eventually progressing to running or HIIT workouts. “No drug in the world can do what movement can for your health,” Bubbs stresses.

6. Commit to the process
Bubbs points out that change takes time – and most people want overnight results, which just don’t happen. Middle-aged people need to map out a long-term strategy and stick to it, he advises, setting goals six, nine or 12 months ahead, rather than trying to achieve everything quickly. Doing it this way will “dramatically increase your odds of success”, he promises.

7. Develop the right habits and understand why
Use your initial inspiration, motivation and discipline to build lifestyle automaticity – aka habits – where you simply ‘just do it’, without having to think about it or make a decision. Bubbs explains: “You just eat the right breakfast, hit your daily steps, and go to bed on time because you’ve repeated the action so many times, it becomes second nature.”

And it certainly helps if you’re building habits that are meaningful for you, rather than blindly following trends. “Taking the time to know yourself better and identify the things that are important for you – your values – is a major piece of the puzzle,” adds Bubbs. “Your values act as your North Star and when struggling with low energy, weight gain or poor health, they help to highlight when your habits are out of alignment. Take a minute to identify your values and you’ll be amazed at how much more success you’re likely to have in developing new habits.”
(PA)