Gibraltar Cricket on Friday held its draft picks as it prepares for the start of the 2022 Gibraltar Premier League.
Four teams will be competing in the league which starts this Spring.
Lathbury Lightning, Calpe Giants, Mediterranean Vikings and Harding Hurricanes will be the teams competing with the captains for each team picking their teams from the many players who had registered.
Following on from his recent success both at international and club level it was no surprise when youngster Louis Bruce was first pick. He will be playing for Lathbury Lightning. Among the first four picks were also Lorne Burns who will play for Calpe Giants, Kenroy Nestor who will place for Harding Hurricanes and Samarth Bohda who will be playing for Mediterranean Vikings. The (cont..)
captains for the teams will be:-
Avinash Pai - Lathbury Lightning
Charles Harrison - CalpeGiants
Kieron Ferrary - Mediterranean Vikings
Iain Latin - Hardings Hurricanes
The winner of which will qualify for next years Champions League of European Cricket. 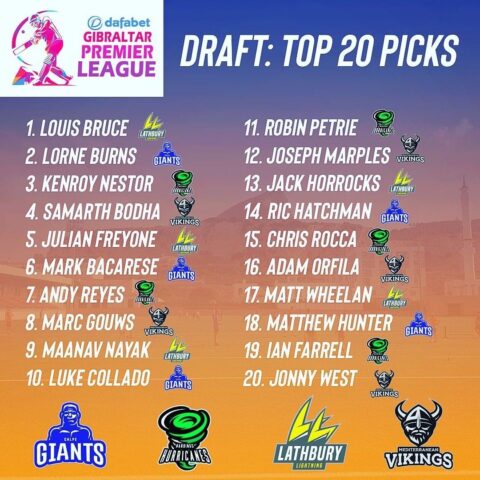