Eagles to host another Eurohockey tournament in 2023

Eagles Hockey will be looking to repeat this past summers success after winning promotion for Gibraltar hockey clubs by successfully hosting and winning the Eurohockey tournament in June.
Although their promotion success will not be enjoyed by them after coming runner up in the league and therefore playing as the second Gibraltar club in European hockey, they will nonetheless be able to once again host a tournament on the Rock.
Celebrating their 60th anniversary in 2023 Eagles have been confirmed as hits of the Challenge III tournament in 2023.
In a statement issued by the club this Wednesday they announced;
“Eagles HC are delighted to confirm that once again, and following the brilliant Eurohockey Challenge Cup that we hosted in 2022, that we have been again selected by the European Hockey Federation to host the 2023 Challenge III competition for men in May 2023.
“Over the moon that our senior men's team has managed to obtain a slot in European competitions yet again and will proudly bring Eurohockey back to our shores. It will be the first time that a Gibraltar team hosts two European competitions consecutively.
“We are extremely grateful to the EHF for allowing us this privilege once again and can assure them we will not fail them; especially in a year when we will be celebrating our 65th Anniversary. We are the largest local club in terms of infrastructure and membership, being the only club with teams in every local competition, and the success of last year' s Eurohockey tournament which we hosted is a testament to the hard work put in by our committee and the great family spirit that reigns in our club.
“We leave you now with the teams participating in the 2023 Challenge tournament and off we go..........we have lots of work to do !” 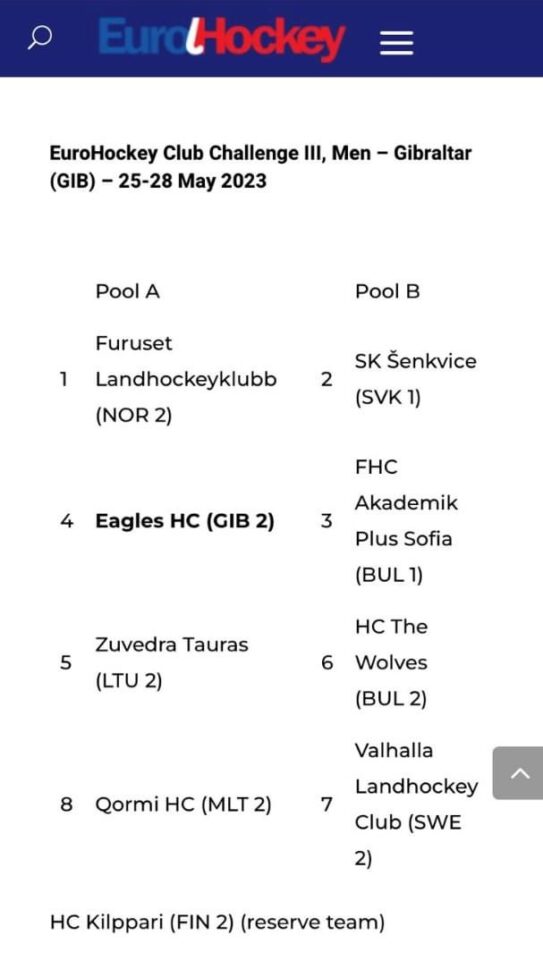