The European Blackball Association has announced that the Nations Cup planned for April 2022 has been cancelled. The decision says the EBA comes following concerns over players safety and the withdrawal of teams including that of Gibraltar.
In an announcement issued by the EBA it stated, “the EBA has made the very difficult decision to inform its members that the Nations Cup planned for Bridlington during April 2022 has been cancelled.”
“Considering the current UK Government guidance and the high degree of uncertainty around what the potential travel restrictions may be in April, along with guidance on events, it is not appropriate to allow our members to be making plans. This coupled with the uncertainty of attending Nations and the recent withdrawal of Gibraltar and Wales informed part of the decision making process.
That being said, the health and well-being of our members must come first.”
The proposed dates for 2023 have also been announced as:-
Week 1: 26 - 29 March – Youths & LD’s
Week 2: 31 Mar - 5 Apr – Adults
The withdrawal of Gibraltar has come as a surprise to some of its members although it is understood that whilst a general announcement is not known to have been issued players already putting their names down for the qualifiers had been informed prior to the EBA’s announcement. 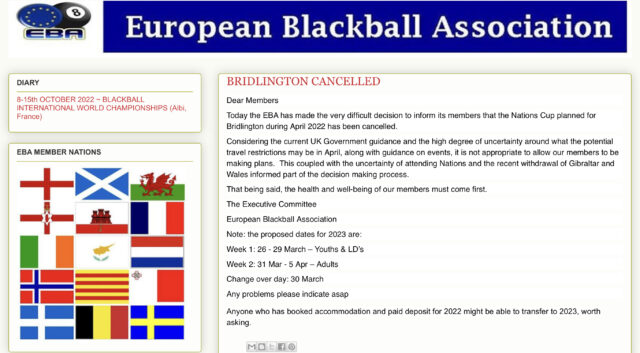