The Gibraltar Pool Association has started their 9 Ball season for 2022. All events are being held at the wonderful facilities at Europa Sports Complex, Europa Point.
The first event of a series of 8 on the GPA 9-ball season calendar was held on 267th/27th February. The season currently boasts 20 players all competing for the coveted Dave Jarvis Player of the Year Award. The format is a points ranking system and the top player will be decided by such.
The first event got under way on Friday afternoon with the preliminary rounds and a few first round matches. The first matches saw some good pool played in patches as some players truly showed their lack of practice. Making headlines on Friday were Jotham Olivero, Kyle Dixon and 11-year-old Byron McGrail, who were playing well and getting everyone’s attention. Saturday afternoon saw the in-form players progressing through the rounds and the semi-finals saw Stefan Llambias against Kyle Dixon and Byron McGrail playing Jotham Olivero.
Stefan and Kyle’s match started off as a scrappy affair with both players missing key shots and ended with Kyle potting a re-spotted 9 ball after Stefan had potted the 9 ball and the cue ball causing a foul. Stefan won the next frame with a 3 ball clearance and although he potted well in the next few frames, he missed crucial balls, allowing Kyle to finish off the frames and secure his place in the final with a 5-1 win.
The semi-final between Jotham and Byron was arguably the match of the tournament. It had everything, intensity, great clearances and missed balls. Both of them have showed the rest of the field what commitment and practice makes to any game as they showcased a spectacle of pool.
Byron was 4-2 up and could have sealed a 5-2 win but ran out of position and snookered himself on the 8-ball allowing Jotham to pot the 8 and an easy 9 ball. Jotham then took on a nice clearance in the next frame taking it to 4-4. This is where the nerves kicked in for both players. Jotham was first to the 9 ball for the win but rattled it and left it over the pocket. Byron was amazed and quickly jumped out of his chair and took the win. 9 ball can be a cruel game at times as it was for Jotham on this occasion.
The final between Kyle and Byron proved to be a great showcase of young talent. It started with both players feeling the pressure and Byron missed a 9ball to the middle gifting the first frame to Kyle. Kyle, though playing well, missed the vital last balls allowing Byron the finish. Byron was 4-1 up and Kyle ran out of position on the 8 ball and missed the cut to leave Byron in. Byron, using the rest, potted a long 8 ball and screwed back perfectly to pot the 9 ball and seal the tournament. A great win for the youngest player in the tournament. Well, done Byron.
For all the information check the Facebook page: http: www.facebook.com/GPA9ball . Next event 11th /12th March. 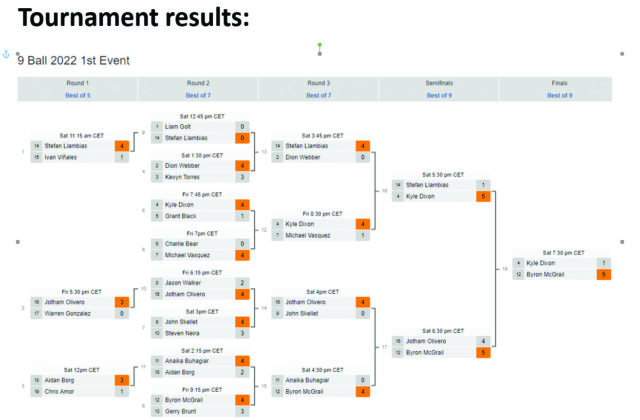 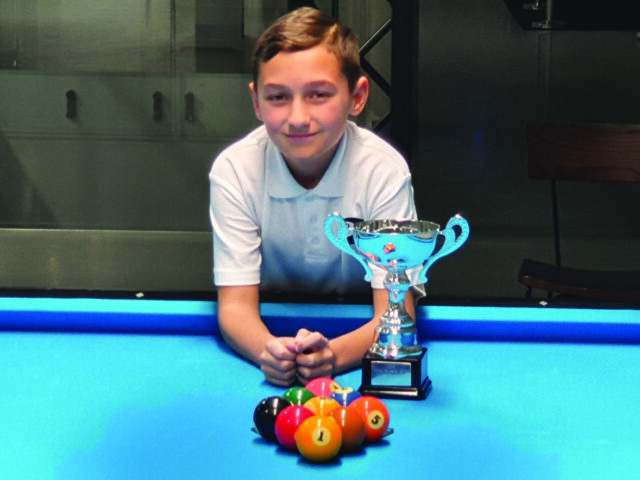 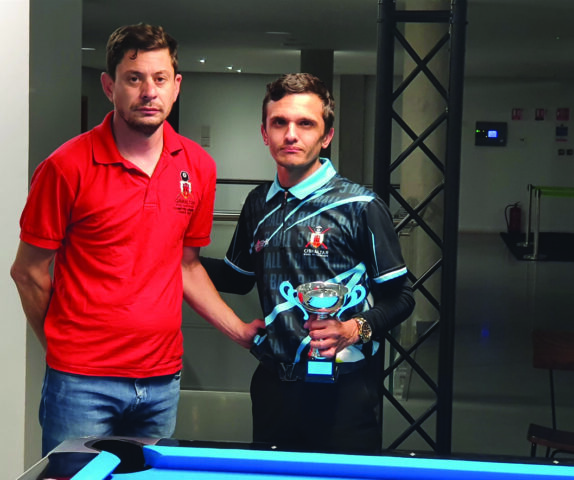