Europa futsal secured a consecutive second season of futsal first division league titles with a convincing 12-0 victory against Lions this weekend, claiming the league trophy. Although six points clear at the top of the table with an unbeaten record and a trophy at hand to show for their feat, Europa still face the uncertainties of a play-off to claim the most important prize in futsal, a chance to play in the UEFA Futsal Champions League.
Europa will have to play against South United next in a play-off semi-final before playing the winners of the Lynx versus Hercules semi-final match.
The adoption of a play-off finish to the competition has been among one of the many controversial points in futsal in recent seasons. Although a play-off round provides additional excitement for supporters and a chance for teams to make up for any bad starts in the season, it also adds additional risks for the favourites who will be gambling their possible chance of playing European club competition football on what happens on a two match option.
This weekend saw how Lynx, who have finished second in the table were defeated by Bavaria by a 5-1 margin. Three goals from Jamie Bosio giving Bavaria a final boost in their final match of the league campaign. The final matchday also saw South United secure their spot in the playoffs beating Hercules and ensuring they leapfrogged Spartans who had narrowly beaten Stallions 5-4 in their final match. 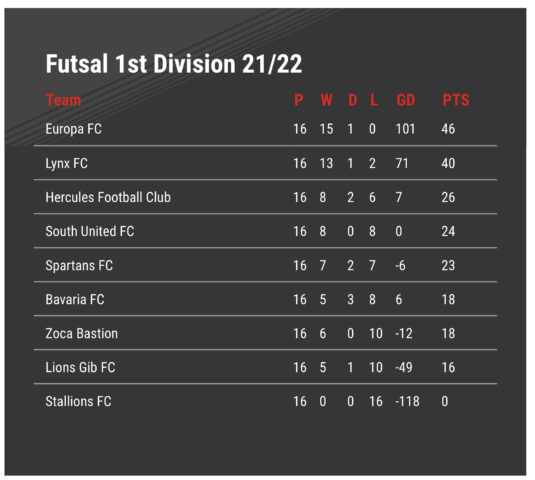