Over 100 personnel took part in the exercise including 60 exercising troops, made up of three individual platoons of 20, two members of the Gibraltar Defence Police dog section together with K9 Oscar against 13 soldiers from another company playing the role of the enemy.

Watching them conduct the exercise was Commander of British Forces Commodore Steve Dainton who hailed the killing of nine enemies and the capture of the remaining four a success. 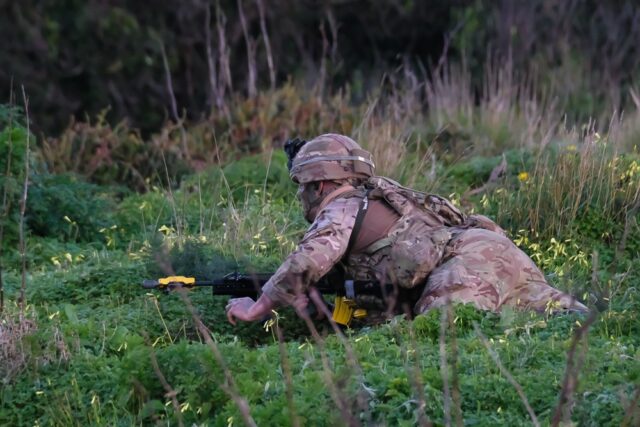 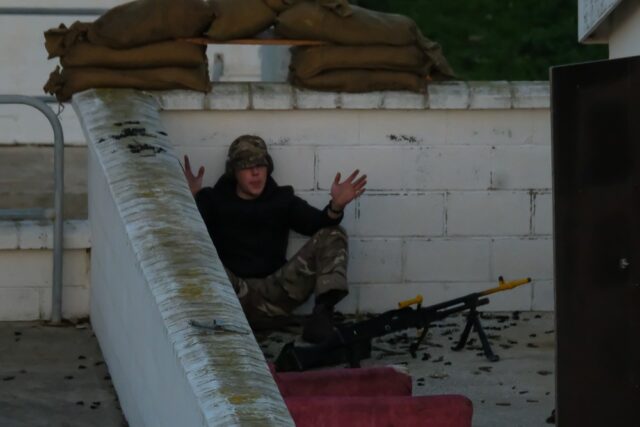 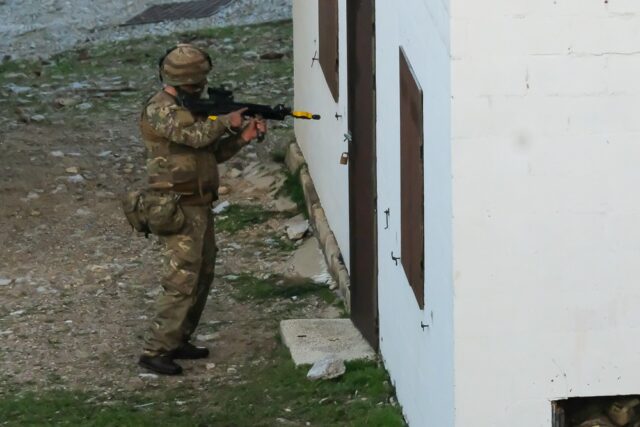 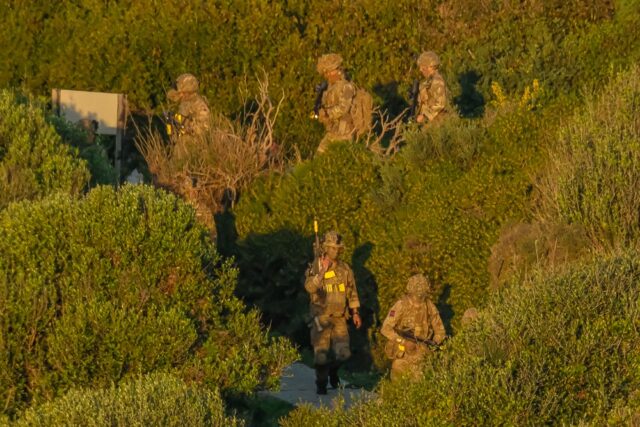 The exercise gave the soldiers the opportunity to practice FIBUA (Fighting In Built Up Areas). Commencing on site at 4am the troops started their attack at 7.45am with the platoons going through 12 different compounds within the Buffadero village.

“We did not specify where the enemy was going to be we just said they were in the village and I was really impressed with the way the squadron went through and cleared the objective,” said Captain Hugo Hunter, who was leading the exercise.

“Not only have you got machine gun platoons, you have also got RPAS operators that is the remote piloted air operated systems you will know them as small quadcopter drones and we also have a plethora of reconnaissance and specialists.”

He noted that it was difficult to control especially in the urban environment.

“It is so complicated, you are constantly fighting a 360 battle,” he said.

“Unlike in Salisbury Plane when you are going across wood blocks or fields it is easier because the battle is very linear. In a building people can hide anywhere.”

“Any small hole that someone can sit in, any cupboard, a chest of drawers, concealed rooms, windows, upstairs, downstairs, subterranean systems, there can be enemy everywhere therefore control is very difficult. The trick is to use surprise but to also clear methodically and safely.” 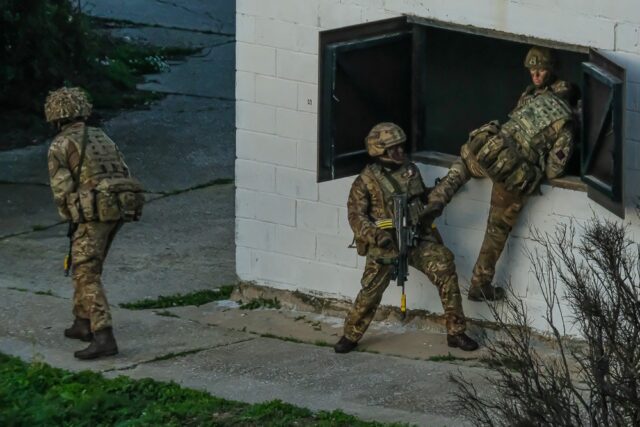 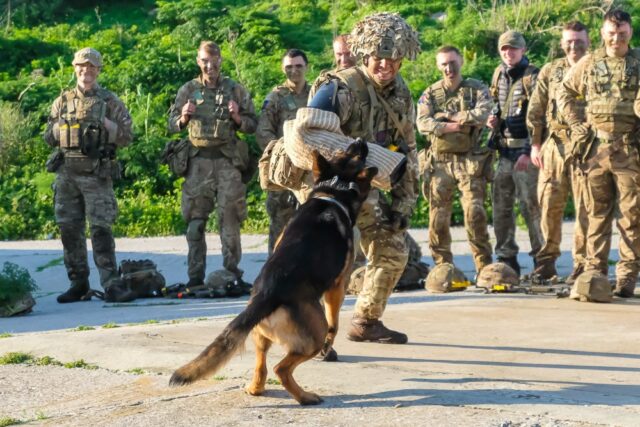 There was 13 enemy in the exercise and they conducted a dawn assault to clear this objective and they managed to clear the building at first light taking only a handful of causalities and captured four CPers [Captured Personal, now used instead of Prisoner of War].

“We brought an extra 13 soldiers out from a different squadron in the regiment, so C squadron, and gave them the opportunity to get something out of this fantastic experience,” said Captain Hunter.

“The soldiers have been desperate to get away for the last 18 months. The army is a career where you are set on travelling and experiencing exciting things and Covid has been very challenging.”

“It has been very difficult to train. We are having to do PT over Zoom, teach tactics over Zoom but nothing can replace coming out here and doing it.”

“So they are delighted to be here and the best thing about the enemy was of course being from a slightly different squadron we actually had some decent rivalry going on. A little bit of competition is always healthy.”

Captain Hunter explained they raid at dawn as it is a good time because the enemy are usually off guard as they are just waking up.

One of the soldiers taking part was Lance Corporal Tom Annetts who was part of FSG (Fire Support Group) up in the high ground looking down on the village.

“I was looking down on the rest of the lads who were assaulting the buildings and I thought it went very well. It was very smooth, slick, there was a lot of aggression and it looked good from up on the higher ground,” he said.

This is the first time he has trained on this scale.

“This urban fighting is a lot different to what we do back in the UK in vehicles, so it is good to get out on the ground and actually do some stuff like this,” he said.

Lance Corporal Lewis Homewood is a section commander within on platoon of the D squadron. Initially he let the reconnaissance party in under the cover of darkness.

“We mark the route out into there, I had lads posted out along the route and then I went back up to the top and showed the rest of the company the way into the area from there and that is when we broke into the actual village and conducted the assault,” he said.

He added: “The lads I have been working with have come on leaps and bounds, they showed a lot of aggression which is what you need in this sort of environment. To get in there and get the job done. You have to be proper aggressive and get in there.” 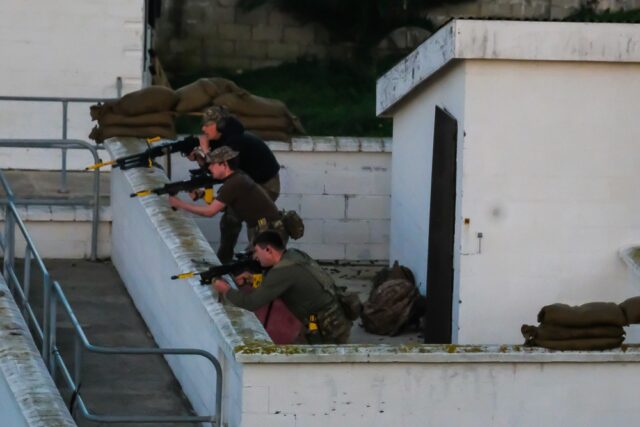 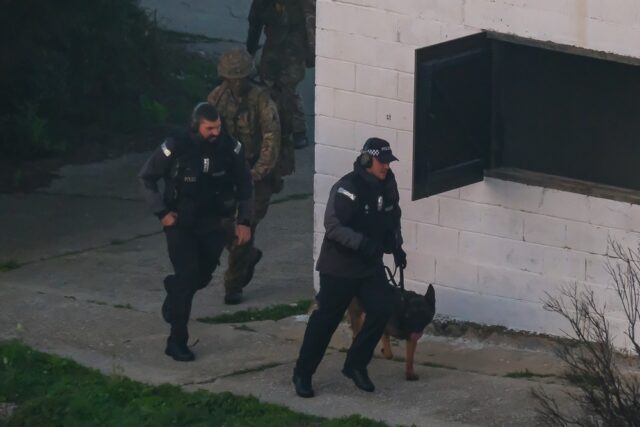 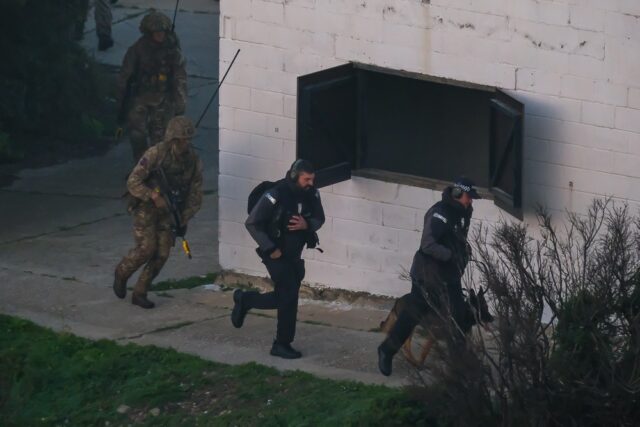 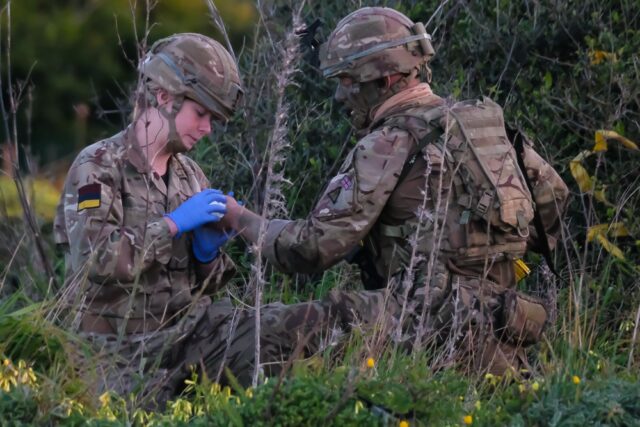 Lance Corporal Homewood worked with Oscar the K9 and the two officers from the Gibraltar Defence Police.

“We had the dog as an asset so we cleared the building that had a tunnel linking the two buildings so we called for the dog handler to come in. I dragged my section out and they went and stacked up on the door and at the same time the dog went through the tunnel and took the guy out in there which mean that room was clear for us. It was a really helpful asset to have with us,” he said.

Lance Corporal Thomas Winter-Hall of D Squadron HCR was part of the platoon that was spearheading the first attack on building one.

“We went in loud with the dog and we followed in as a section,” he said.

“We secured the Cpers and the rest of the building. We did so by posting a fragmentation grenade [a simulator] on the top floor just because there was a ladder just to give ourselves a bit of cover. We then followed that up and cleared the top floor and once we cleared the remainder of the building we let the two section which are our follow up reserve that building one was clear.”

“We then held building one as a reserve and then echelon through two and three section further on to take building three as a section again.”

He was one of the soldiers firing rounds and was responsible for the taking out of two of the enemies, from the six shots he fired.

“We have trained a long time for this so to actually be here and put it into play has been really good,” he added.

Lance Corporal Winter-Hall will also form part of the guards outside the Governor’s residence the Convent next week before hopefully enjoying some of the leisure activities Gibraltar has to offer. 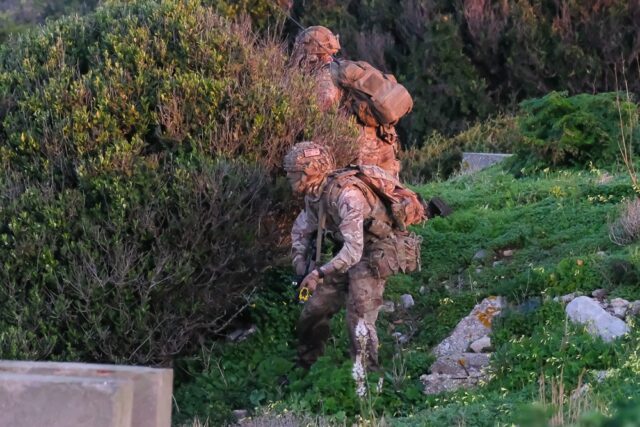 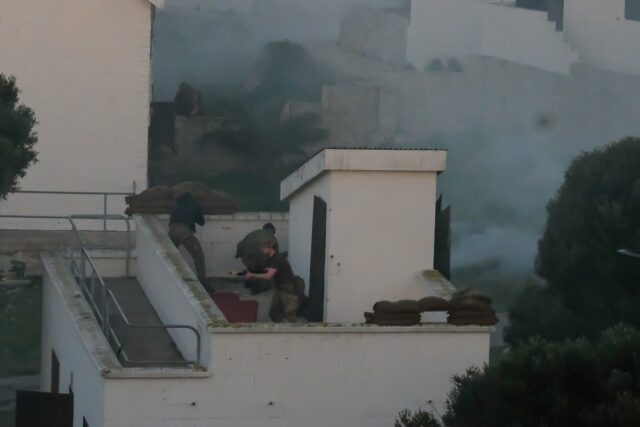 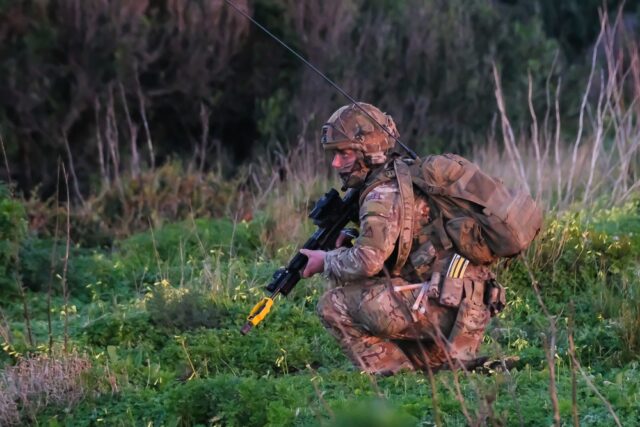 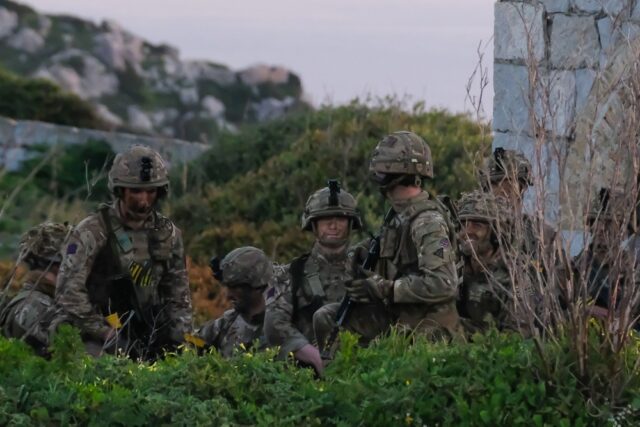