Lord Airey’s Battery at the top of the Rock had an extensive restoration and renovation to it last week thanks to a team of ten veterans from the UK who came out to assist Pete Jackson from the Gibraltar Heritage Trust with his project.

Their visit is credited to Alabaré a UK based charity which helps support vulnerable, homeless and marginalised people. 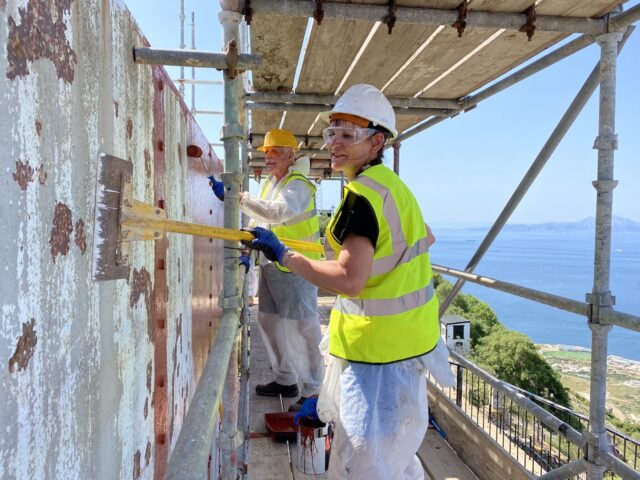 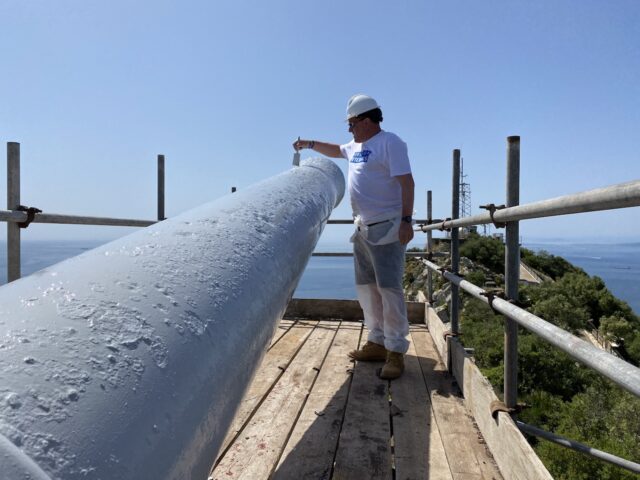 The purpose of the Gibraltar Veterans Heritage project is to build an enduring link to a place where many have served or passed through, and which has positive memories for them.

Lord Airey’s Battery was built by British troops in 1891 and seen service throughout both World Wars.

Their visit is the idea of Alabaré Chief Executive, Andrew Lord, who was also on the Rock and taking part in the heavy work. 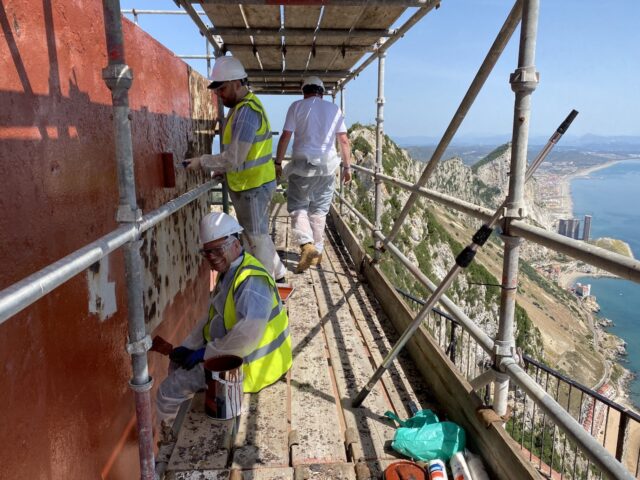 Mr Lord was in Gibraltar last year when he met Mr Jackson on one of the history buffs tunnel tours.

When he found out the work Mr Jackson was doing by himself on the battery he knew it would be a great project for some of the members the charity supports to get involved with.

“I think everyone on our team has said they know they have done something physical,” said Mr Lord.

“The team of ten veterans are having some great conversations going on about their military experience and some of them have been out to Gibraltar when they served and they are showing the others ‘that is where we went’. So there is great comradery up on the battery.”

The ten comprise of eight men and two women across a number of the different British regiments, army and navy.
“We have royal navy, royal marines, REME (Royal Electrical and Mechanical Engineers), rifles,” said Mr Lord.
“With the age range of 39 to the mid 80s.”

“One of the guys in the 80s [Dennis Abbott] last year helped to build his own home. Lee [Hulbert] started two weeks ago on his self-build and Debbie who is also on the team was on a self-build in Plymouth nine months ago.” 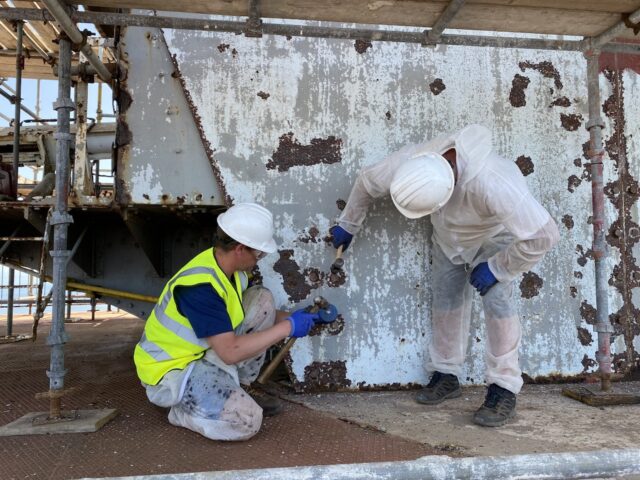 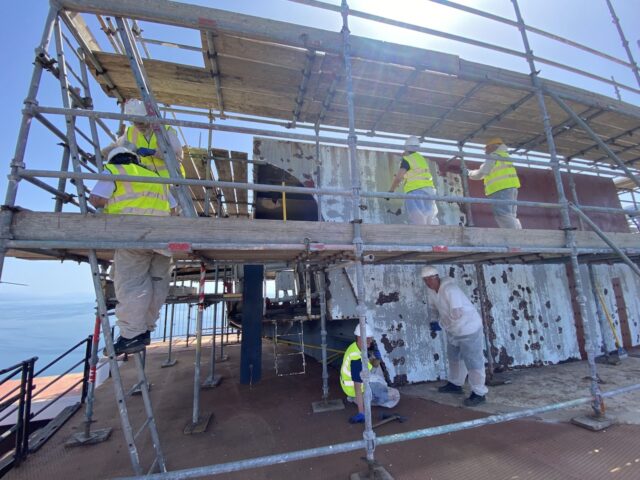 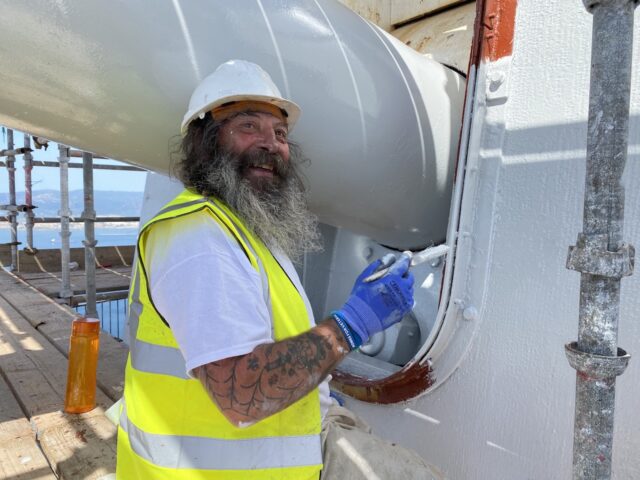 Mr Lord had nothing but praise for Mr Jackson and made it clear they could not have done it without him.

“He has been superb. The team have worked really hard and have really enjoyed the experience and assuming everything goes well in the future we would love to do it again.”

“And, Gibraltar has made us very welcome as well.”

The majority of the team have been staying at the Europa Retreat Centre and when they were in Kings Chapel on Sunday morning the staff cooked them all a lovely breakfast. 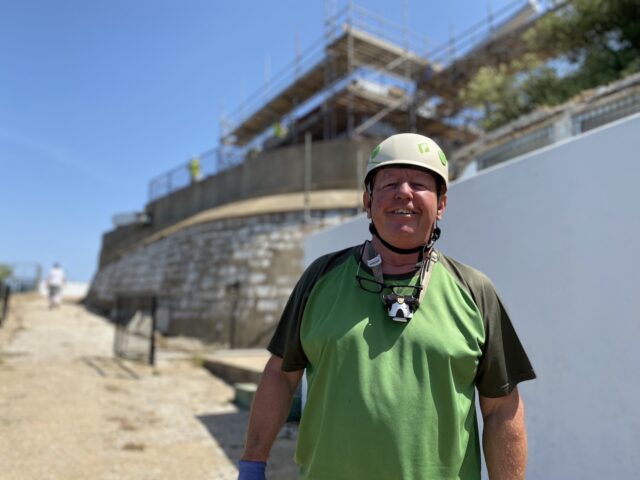 “The whole point of this project was to pick part of the job that Alabaré can benefit from so they can stand back and say we have done that. And, the best way to have done that is to do the outside. The aesthetics of the gun,” said Mr Jackson.

“This is on the highest point of the Rock, it is iconic and it gives them pride in what they have achieved. I get the outside of the gun painted in the time scale that would have taken me on my own five week and it is done in five days with all the extra hands.”

He explained the work was not just giving the gun a simple lick of paint, it was a chip out and take away rust and paint, with a quarter a tonne of rust bagged up and ready to be taken to the Eco Park.

Mr Jackson had positive things to say about all the team members but in particular the two men who are over 80, who have been on stripping down paint, laying down red oxide followed by paint “in no time at all and up and down that scaffolding like kids.”

“It is fantastic to see and I am so grateful.”

He also had praise for the local scaffolding firm led by its owner Gary Evans who constructed the scaffolding in such a way with extra railings it meant that they could do away with harnesses once they became familiar with the site.

He also thanked the Ministry for making the project happen and even Portman who provided the essential port-a-loo for the site and to the Heritage Trust for their ongoing support to the project and of course to Alabaré and the Royal Gibraltar Regiment who had a group go up to assist for the first few days.

“I am just so grateful that people have recognised what I am doing here and have come onboard to help,” he said. 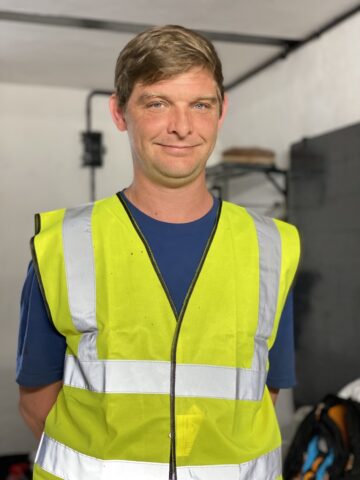 Mr Hulbert is the youngest of the team at 39 and not only was it his first time to Gibraltar it was also his first holiday ever.

“This was an opportunity to have a bit of a holiday with obviously some work involved. I don’t mind working if I can go out on the beach at a night time,” he said.

Some of the highlights include seeing the work he is doing making a difference.

“It was in a terrible state when we got here and now it looks amazing,” he said.

The charity has not only given him this experience but are also helping him build his own home and learn a trade in the process.

“I was homeless for about six months, living on the streets and in the woods [in Gloucester] and then I found out about Alabaré and they offered me a place to live and that is where I am now,” he said.

“Then there is this other project that Alabaré are doing called self-build. It is a yearlong project and I do six months going around the site doing a taster of everything they do, like bricklaying, plastering, ground works, everything.”

“I get a taste of all that and after the six months I get to say what I enjoy doing, what I am good at and get into that trade.”

“And, while that is happening as well I am building my own place.”

He gets priority to live in that home and will have to pay rent. His new home will be a one bed maisonette in Ludgershall, Wiltshire.

He is loving it so far and is enjoying the bricklaying the most.

“I don’t know why, I just get involved and I my mind goes somewhere else and I just put up a load of bricks while I am doing that,” he said.

Once his house is built he will move on to help another house to be built on the site, where a total of 500 houses are planned and aim to be erected over the five year project.

“When my house is done and I get to move into my own place. Hopefully I will get taken on by one of the contractors, which is quite likely. And, then I can carry on, on the site for the next four years. I can just walk out my door and go straight to work,” he added. 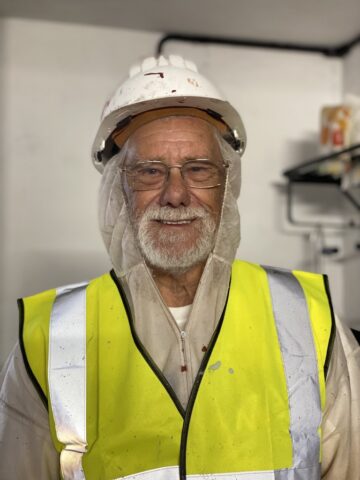 Mr Abbott turns 87 in four weeks enjoyed his time on the Rock.

“It’s been an absolute privilege, it’s like joining up again. It is a good team,” he said.

His age is not an indication of how hard he can or does work with colleagues calling him an “inspiration, when people see how hard Dennis works it makes them work harder,” said one team member.

How he came to get involved in the project started a couple of years ago.

“I was living in a field, perfectly all on my own and various things happened and I got clued up together with Alabaré. I was talking to one of the guys there and he said why don’t you get involved with the building contract,” he said.

“So working on that project is where this crept in and I said if I was still here I am all for it.”

When the rest of the world was holed up at home during Covid-19 Mr Abbott was part of a self-build team and by the end of that year he was ready to move into his new home. A home he helped create the best way he could as legally there was restrictions to various tasks health and safety would allow his to perform. However, having been a carpenter by trade for numerous years he put those skills to use on site at the new homes in Leominster, Herefordshire.

“I was turning up for site work but they would say I know you can get up there [up a ladder or scaffold] but we can’t let you,” he said.

“But, I wanted to meet my end of the project by doing carpentry work for the group and I think that is how I got involved in this project in Gibraltar.” He has made a shield for the project which will be on display at a later date.

“And, I made all the lads that worked on that particular site first aid boxes and all what I would call veteran’s chairs. So they have all got their first aid box with their regimental badges and the military veteran badge on the chair.”

Mr Abbott had been to Gibraltar back in the 50s and said it was good to be back.