Photographs, press clippings and live testimonials from veterans have gone on display at an exhibition that marks the 40th anniversary of the liberation of the Falkland Islands.

The exhibition was formally launched by the Deputy Chief Minister, Dr Joseph Garcia, at the John Mackintosh Hall on Monday.

The exhibition was curated by the Archivist Anthony Pitaluga and prepared by the Gibraltar National Archives.

The exhibition is made up 190 A1 PVC panels displaying 483 individual images, testimonials from Falkland veterans, a collection of original memorabilia, and a section of postage material relevant to the conflict, which are also on display.

This includes uniforms and military gear from local veterans who served in the Falkland Islands, namely Ralph Capurro and Richard Setter.

There is also an interactive research station where archival material from the UK National Archives and the Imperial War Museum can be viewed.

A short silence was held in memory of those who died in battle and who made the “ultimate sacrifice.”

“These people were there to protect freedom, and democracy and self-determination,” Mr Pitaluga said.

The exhibition’s opening follows the unveiling of a commemorative plaque last week to honour Gibraltar’s role in the Falklands conflict.

Dr Garcia underscored the “unbreakable bond” between Gibraltar and the Falklands that explained was cemented during the war, and “exists to this day”.

There were strong parallels between both places and many Gibraltarians saw their own situation reflected in the plight of the Falklands and defended their right to self-determination, Dr Garcia said. 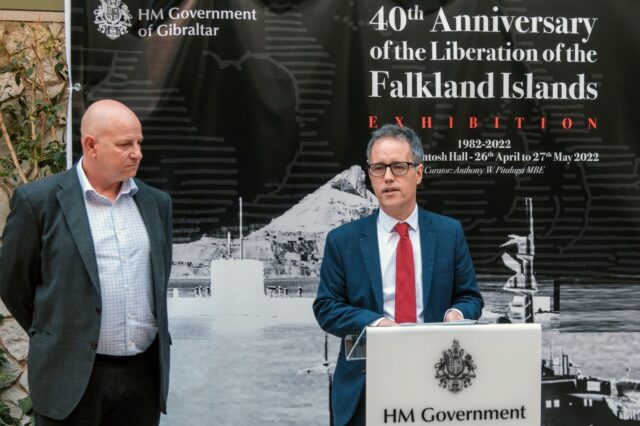 “Our history, and that of the Falkland Islands, are interwoven throughout this episode,” Dr Garcia said.

“More broadly, the right to freedom and to self-determination came to the fore.”

“In many ways, the war to liberate the Falklands became our war also.”

“True there are differences in this situation, but the principles are nonetheless the same.”

“A territory, however small, cannot simply be handed over to the giant neighbours against the wishes of its people.”

Dr Garcia said this meant that “self-determination is, and must be, paramount.”

The conflict in the Falklands had a direct impact on Gibraltar at the time, with the reopening of the border delayed and an Argentine military operation against the Rock thwarted.

A very close relationship was maintained throughout the conflict and continued after the Islands were liberated on June 14, 1982.

Dr Garcia thanked Mr Pitaluga and his staff at the Gibraltar National Archives as well as his army of volunteers and helpers who have all played their part in delivering this exhibition.

“The Government is grateful to all those who have contributed to make this exhibition a reality,” Dr Garcia added.

“This is yet another excellent exposition of an important period of Gibraltar’s history.” 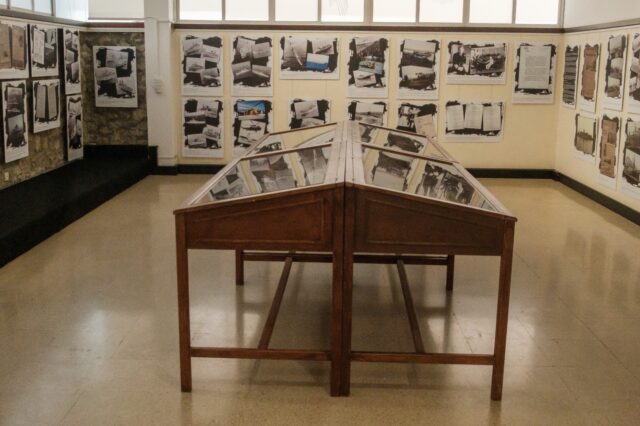