A father and daughter have made a life-size balloon model of Captain Tom Moore to honour his fundraising achievements.

Craig Cash, 39, and his nine-year-old daughter Olivia-Mae have been creating intricate balloon models during the lockdown period and displaying them in their garden in Horncastle, Lincolnshire.

Their latest effort, depicting 99-year-old Captain Tom as he walked 100 laps of his garden to raise money for the NHS, has proved a big hit on social media – even winning the approval of the man himself.

“It’s had loads of great response, more than I could ever imagine,” Mr Cash told the PA news agency.

“It’s got to Captain Tom Moore himself and he’s retweeted it and said he really likes it and thinks it looks like him. I’m so happy that he’s been able to see it and that he approves of it.”

The statue is made of around 100 balloons, with even the glasses made from balloons with pipe cleaners inside.

The only non-balloon element is a stand, to prevent the statue from blowing away in the wind and keep Captain Tom, who has raised £28 million for the NHS, in his familiar walking stance. 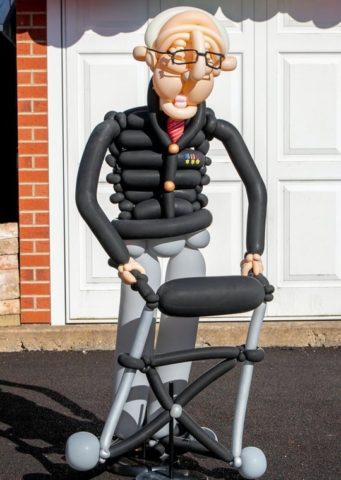 Mr Cash said: “I needed the stance right, I needed to capture him – otherwise it was just going to be an old bloke on a Zimmer frame and I didn’t want that. It needed to be him.

“I have three photos of him that I kept going back to, just trying to work it to try and make it as much like him as possible.

“The hardest part was doing it respectfully and to a standard to honour him as a tribute.”

Mr Cash took up balloon modelling 16 years ago when he was recovering from a hernia operation.

While he is on furlough from his job fitting CCTV and alarm systems during the coronavirus shutdown, he has been using the skill to “spread a bit of cheer and make people smile” – as well as spending time with his daughter.

“It’s been a real nice bonding experience,” he said.

“It’s a real positive thing to look back on during this negative, grey time we’re living in.”

Among the models the pair have made during lockdown are a 7ft heart honouring the NHS and an Easter basket.

Now they are aiming to make displays honouring different sectors of key workers, starting with farmers and including lorry drivers, shop workers and teachers.

“For all the other people who probably don’t get as much of a mention, that’s our aim, to make sure we say thank you to them as well,” Mr Cash said.

“In this time, it’s everyone pulling together. There are a lot of people out there making everything go OK.”

Angry protest in La Linea after deaths at sea