It was at the age of nine that Sean Picton first realised he wanted to become a policeman.

The year was 1997 and a couple of officers from Merseyside Police had come to his primary school to talk to pupils about life as an officer.

At the time, Sean lived in one of the roughest and most deprived parts of Liverpool, but he knew from an early age that he wanted to make a difference in his neighbourhood.
Sean, 32, who was born in Saint Asaph, Wales, said: “I remember a lot of the stuff they were saying appealed to me at that age.

“I lived in an absolute dump of an area and there was crime everywhere – it was horrendous. There were no-go zones if you were walking around late at night, regardless of whether you were police or public. So that was a big part of my growing up. I remember looking out of my front window and the police would be constantly chasing stolen cars.” 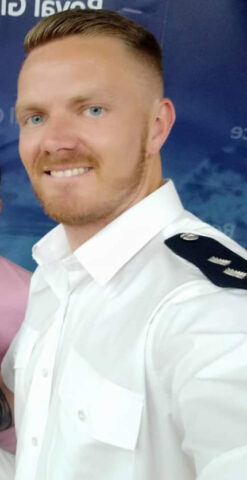 After a few jobs, including working as a barman in a local Weatherspoon’s pub and catering work at both Liverpool and Everton Football Clubs, Sean joined Merseyside Police at 19, as a Police Community Support Officer.
After a year Sean became a full time police constable in the force, where he spent the next six years of his career.

During this time he worked in the Neighbourhood Policing Team, which was very different to the team in Gibraltar.
The single dad of two, explained: “Policing was very aggressive and robust. At one point it became so hostile that I had to wear body armour off duty, while pushing my daughters in their pram. One year I was assaulted 20 times, and became ‘the most assaulted officer’ in Merseyside.”

Then in 2016, Sean moved to Gibraltar after passing the RGP’s selection weekend.
When asked why he wanted to move to the Rock, the Everton Football Club fan, said: “I always wanted to police abroad, that was part of my plan. I had looked at Canada and Australia. But Gibraltar gave me the prospect of community policing and the fact that you know the people that you come into contact with – both good and bad. So it makes policing easier. But also the policing system here doesn’t suffer from many of the faults in the UK police. The common sense approach to policing is more in use here than it was in Merseyside.”

He explained that an example of this was that if you received three complaints in a year at Merseyside, regardless of whether they were founded or unfounded, or made maliciously, you were put on a scheme that stopped you from moving department or getting promoted. 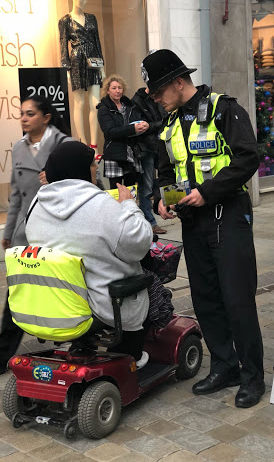 Sean added that the lifestyle and climate here were also a big factor in moving to the Rock.
“And the fact that it’s a tight-knit organisation, that’s a big thing for me. You wouldn’t know everyone you work with in Merseyside. But here you see all the bosses and you can interact with them, whereas back in the UK I saw the Chief Inspector maybe ten times in six years and I never met the Chief Constable. It’s certainly more personal here, which is better.”

As for his proudest moments so far in the RGP, Sean said it was getting the phone call that promoted him to Sergeant in September 2018 – and then getting promoted to Inspector in July 2020.

And when asked what area of policing he has enjoyed the most in the RGP, during his time as a uniformed officer, in neighbourhood policing and his current role as the Inspector in the Training Department, he said: “Everywhere I have worked there has been good camaraderie. I just love the banter and the people I work with. Back in Merseyside it was more difficult to mix as you may have officers join your team that you’ve never met, who might only be with you for six months. But for me here, the closeness of the officers is what’s good and it gets you through your bad days too.”
As for the negatives, he said Gibraltar is not immune from the issue of drugs, and it’s something that he would like to tackle more robustly.

He said: “Drugs have a major impact on a lot of people who commit assaults, burglaries, thefts and robberies. But it also impacts on people’s mental health. I’d like us to focus more resources on the drugs problem in Gibraltar.”
And what are the positives of being a police officer according to Sean?
“It instils you with an awareness of day to day life and risk factors, so it keeps you safe in many ways, you switch on. Don’t get me wrong, it’s difficult to switch off, but if you’re switched on, it can keep you and your family safe.”

“But for me, the fact that you get to arrest people who harm others, that’s what I like to do. That’s my motivation, I lived in an area of high poverty and high crime and for me my motivation was getting stuck into people that were making that area worse.
“For me right now my big motivating factor is that I like to be able to give back to the new recruits, give them the best foundation, so that rather than just me making a difference as an individual, I can have a more positive impact on public safety by teaching 30 new recruits well, as opposed to me just doing it on my own. So, for me, that is very satisfying.”

“For many people they will get major satisfaction digging into a complex fraud case, or something like that. For me, that just doesn’t float my boat. That doesn’t motivate me and it doesn’t drive me. I’m not able to process that amount of data in that sort of way. Other people will be really fuelled by helping victims of domestic abuse, for whatever reason, maybe that’s because they’ve joined the police because of a particular experience, and they are giving back in that area.”

“For me my personal motivation, I love tackling people who deal drugs, people who are violent and people who like to kick off and ruin the quality of life for those that abide by the law.”
But there are negatives to being a police officer according to Sean.

He said: “It can have a major negative impact on you as a person and with your interactions with people outside of the police. It’s no secret that police officers have a high divorce rate. You’ve got to remember that from our perspective, it’s very hard to switch off, especially if you live in Gibraltar. But if you are dealing with incidents day in and day out that are of major significance, and then you go home and your other half is raising a big issue, which, in comparison to what you’re dealing with, is a minor issue, then if you are not switching off as a cop and becoming a human, or a partner or dad, or whatever, then to you that may just be asmall problem compared to the death I’ve just dealt with. And you won’t nurture the relationships that you have.
“And when you go to a restaurant you always sit where you can see the door, so that you can see who is coming in. It’s like a paranoia thing. So that definitely is a negative.”

Sean also talked about being affected by depression, due to events that he had dealt with at work.
He recalled: “One of the things that stuck with me, which I didn’t even realise had affected me at the time, was in December 2014. I went to a suicide where there was a 14-year-old girl who took an overdose. The
mum rang us, we turned up and the girl was fine initially, but then we saw her shutting down. We rang for an ambulance, but it was 45 minutes away. So we drove her to hospital, where she died. At the time I didn’t think it affected me. But when I got hit by depression in 2019, I had to get NLP (Neuro-linguistic programming) therapy, just to get rid of those images. So yeah, you might deal with something, bank it like a computer in your storage area, and then it manifests itself later on for whatever reason.”
As for Sean’s hobbies out of work, he has a few.

“I do a lot of reading. A lot of personal development stuff. After the depression I thought I had to make some sort of conscious improvement in my life. But also I think it makes me more self-aware about how I interact with recruits and how I operate in a leadership position.

“I also read a lot about Norse and Greek Mythology, Roman history, all that sort of stuff. And I enjoy just going out with the kids and going on hikes or down to the beach.”

Lord Frost acknowledges ‘problems’ in Gib talks with EU, but insists ‘we can find a way through’