GDP bids fond farewell to officer who served for 37 years

Colleagues from the Gibraltar Defence Police gathered recently to bid farewell to a long serving officer after 37 years.

Constable Michael Martinez first joined the police force in 1984 when it was named the Gibraltar Security Police, where he carried out duties such as the Control Room Operator.

The force then rebranded and was named Gibraltar Services Police, where Constable Martinez worked alongside RAF Gibraltar carrying out a range of duties at the North and South Dispersals, the guardroom, North and South barrier and Air Traffic Control Operations. 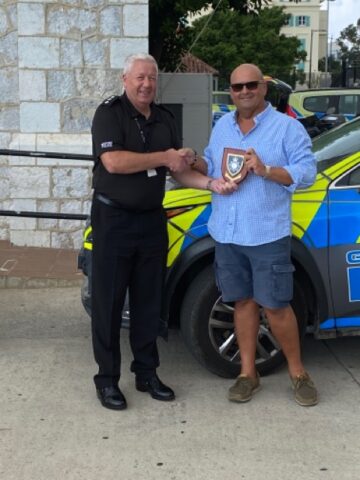 During his time in the service, he was amongst the first to be trained and assigned as a control room operator when the force only had three radios.

Constable Martinez qualified as a firearms officer in 1999 with the SA80 rifle and with the MP5 carbine in 2003.

At the later stages of his career, he resumed control room operator duties where his knowledge and experience was shared with colleagues to deliver the best police service.

He will conclude his service in the Gibraltar Defence Police today.

Constable Martinez, who is an accomplished musician and a talented portrait artist, said: “I am looking forward to spending more time enjoying my hobbies and with my wife Vivien and children Gabriella and Matthew.”