#GibChess Battle of the Sexes Chess Tournament: Round 2

Round two of the #GibChess Battle of the Sexes Tournament, held at the Gibraltar Garrison Library on Tuesday 25 January, proved to be an exact repeat of the medicine dished out by the women to the men in round one - a 6½-3½ drubbing for the male sex.

All chess pundits (and I include myself) had been thinking that the women’s team’s considerable initial advantage in having ten whites in their first game was a major factor in their success but Team Pia convincingly refuted that notion by doing precisely the same thing when armed with the less favoured black pieces. 6½-3½, 6½-3½ sounds a bit like a tennis score with Team Sabino in some danger of elimination in straights sets but luckily for them the scoring system used in chess is less brutal and they still have eighty more attempts to make up the six-point deficit. 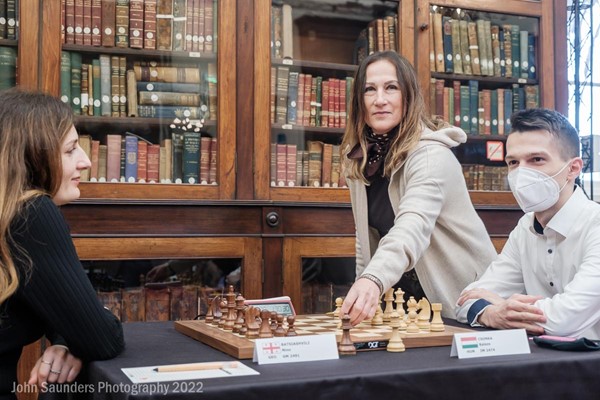 Taking a general overview of the ten games, once again it seemed as if Team Sabino reached favourable positions before going wrong in the late middlegame, or else not pushing hard enough for a positive result and caving in to early draws. It’s too early to derive any definite conclusions but it’s hard not to reflect on the players’ answers to the question ‘who will win’ during the opening ceremony when the men’s opinions seemed vague and indecisive whereas the women were apparently working from an agreed script in stating quite categorically ‘we will’. Anyone who has ever witnessed the festival’s much-loved Saturday night Battle of the Sexes fun blitz matches will recall how the women’s team works together and celebrates their successes with whoops of joy and hugs, whereas the individualistic male players prefer to poke fun at each other’s blunders rather than cooperate for the common good. Maybe this is an extension of that scenario but, if the men are not to leave the Garrison Library with rather less cash in their pockets than they hoped, they should perhaps give some thought to the psychological aspects of the challenge. Either that or, in the words of a blunter and less charitable age, just pull yourself together, chaps.

Ravi Haria vs Marie Sebag: a Bb5 Sicilian, it was drawn in 27 moves but only after White had achieved a small middlegame edge. In her later interview with me (available on YouTube), Marie Sebag thought 20 h4 was an improvement for her opponent but the move played allowed her to free her position and secure a comfortable draw.

Bobby Cheng vs Olga Girya: a Catalan, drawn in 32 moves. It featured a 7...Nc6 which might have come as a surprise to the uninitiated (e.g. me) but is known and reasonably safe despite a pawn being lost. Olga Girya told me in the later interview that she thought 13 Bd2 was an improvement as played by Goryachkina versus Dubov. As played, White’s pawn structure was too loose to be able to expect more than a draw despite a pawn surplus.

Leandro Krysa vs Pia Cramling: a Bogo-Indian, drawn in 30 moves. White had a modicum of pressure but any advantage fizzled out and a draw was agreed.

Balazs Csonka vs Nino Batsiashvili: Giuoco Pianissimo, drawn in 27 moves. An opening rarely seen when I started playing a few decades back, probably because the ‘giuoco’ was a bit too ‘pianissimo’ for most people’s tastes. Nevertheless White did succeed in squeezing some juice from this rather dry fruit and emerged with something of a plus. The draw being agreed when it was might seem surprising but White had left himself with only two minutes for some 13 moves and it wasn’t entirely clearly how he could exploit his advantage in position. 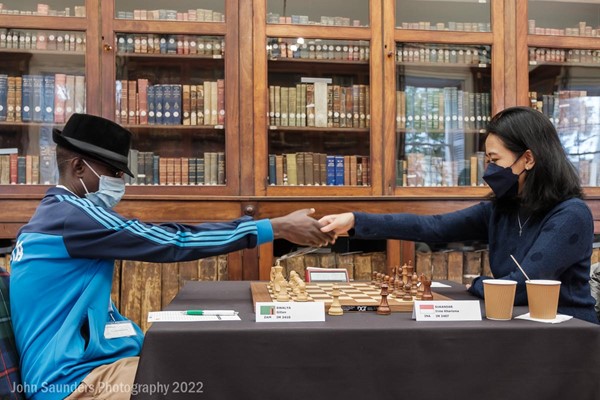 Gillian Bwalya vs Irene Sukandar: Nimzo-Indian, win for Black in 34 moves. The first alarm bells for Team Sabino sounded when Gillian Bwalya, no doubt still suffering after-effects of his long and much-delayed journey to Gibraltar, succumbed to defeat to Irene Sukandar, putting her on a perfect 2/2. Black emerged with a comfortable game from the opening but things only turned bad for White when he missed the twin strike of 28...f5 and 29...h4 which left his rook with so escape route. 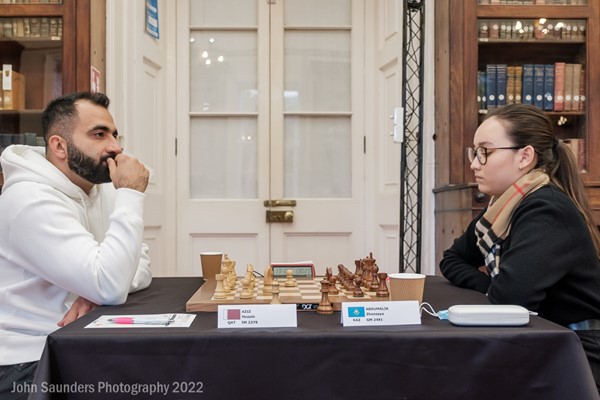 The remaining five games laster rather longer. The women secured their second full point when Zhansaya Abdumalik prevailed against Husain Aziz. The opening was an unfamiliar (to me) Grünfeld/King’s Indian which has been dubbed the East Indian Defence. White’s opening play, giving up a pawn, looked overly ambitious. Black then gave up the exchange for a second pawn. It wasn’t by any means conclusive but White’s play soon disintegrated.

Sabrino Brunello vs Marsel Efroimsky: London System, 51 moves, drawn. The men’s team gradually improved his position from favourable to overwhelming but he then made a terrible oversight which left him close to lost. However, White managed to struggle though to a draw. That said, he would have been kicking himself for not converting earlier.

Eric Rosen vs Jovi Houska: Caro-Kann, 57 moves, drawn. The advantage swung back and forth a few times in this queenless but complex middlegame which I am not going to pretend I understand. In the end White was probably the more relieved to draw but he had some chances himself earlier in the game. 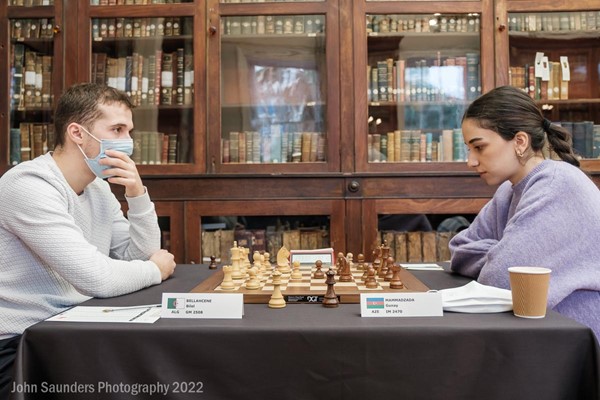 Bilel Bellahcene vs Gunay Mammadzada: Najdorf Sicilian, 51 moves, won by Black. Black looked awkwardly placed for the first 20 to 30 moves but time trouble changed the complexion of the game, with Black imperceptibly taking control. Eventually White lost a pawn after which his position fell apart. A resilient fightback which I think earns the title of game of the day, securing a very valuable third point for Team Pia.

Joe Gallagher vs Mariya Muzychuk: Sicilian Anderssen, 67 moves, drawn. White fought his way into a position which was won, albeit fleetingly, when Black played 36...Bf8. The missed win was 39 Qe5 but it wasn’t so easy to find. Thereafter White’s didn’t have enough to convert.

Quite a day’s chess. Play continues in round three on Wednesday 26 January at 15.00 CET.