#GibChess Battle of the Sexes Chess Tournament: Round 3

After two tough rounds in which they were heavily defeated, the men’s team fought back with a vengeance in round three of the #GibChess Battle of the Sexes Tournament and won by the impressive margin of 7-3 in this men versus women classical chess event, played at Gibraltar’s Garrison Library on Wednesday 26 January. The match score is thus now 16-14 in favour of the women but with the men close behind with a long way to go.

This match-tournament, featuring teams of similar strength and age range, might have been expected to feature close results in every round but once again it defied all expectation, with the margin of victory being even wider than the one achieved by the women in rounds one and two. The men scored four wins and six draws - and achieved with the black pieces. This means that, of the last twenty games played, seven have been won by Black and 13 drawn, with White failing to score a win in any of them.

The first two rounds saw significant swings of fortunes, with the men seemingly doing well before subsiding to defeat on a number of boards, but round three was more one-way traffic, with the Team Pia never seriously threatening to get ahead of Team Sabino.

The round started with a quick draw between Marie Sebag and Joe Gallagher in 16 moves. It began with a Bb5 Sicilian in which the pieces were rapidly exchanged down to a drawn ending. Or at least they might have been had the game continued in the way Marie Sebag indicated at the post-game interview (and who am I to argue).

Olga Girya vs Balazs Csonka was another quickish draw, though this Queen’s Gambit Accepted packed a good degree of entertainment into its 20 moves as the young Hungarian demonstrated in the post-game interview. I did drop a cruel jibe about this being the Battle of the Sexes rather than the Peace of the Sexes into the post-game interview but Balazs had the presence of mind and good humour not to rise to the bait. 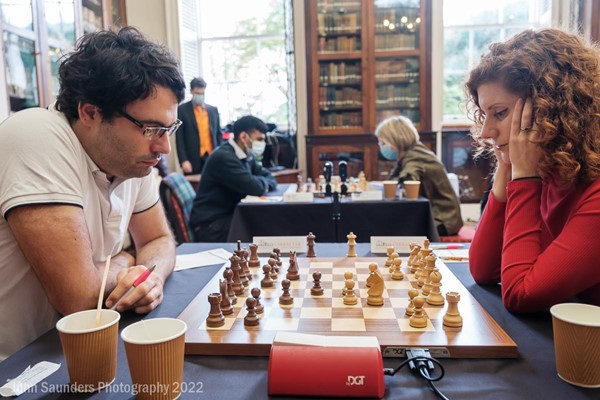 As with the women’s team on the previous day, the men’s captain decided it was time to lead by example. The genial Sabino Brunello won a 32-move Semi-Slav against Jovi Houska, who seems to be struggling to readjust from being a TV commentator to sitting at the board. White seemed reasonably placed until around move 22 but thereafter her position subsided quickly.

Marsel Efroimski vs Gillian Bwalya was a standard Kan Sicilian until around move 13. Black seemed a tiny bit better for a while but chances soon dwindled.

Irene Sukandar vs Husain Aziz was a Berlin Ruy Lopez. It was well contested but didn’t quite catch fire. 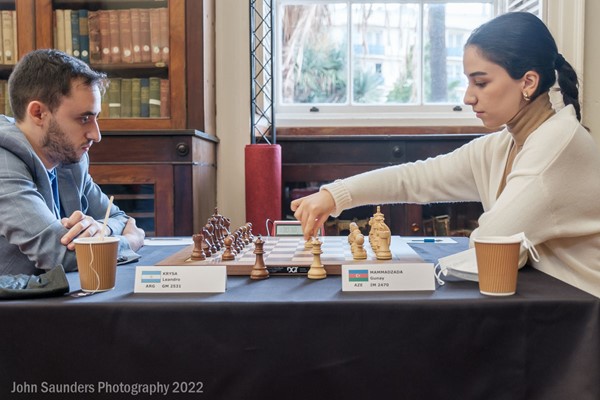 Gunay Mammadzada vs Leandro Krysa was a 39-move Caro-Kann, Tartakower variation. Things proceeded fairly normally until White played 16 f4 which looks like a serious positional error. After the forced reply 16...f5 White didn’t have a lot going for her, with a number of insoluble weaknesses, particularly in her pawn structure. Black improved his position steadily, steering clear of prospective attempts at counterplay and eventually White’s game crumbled. 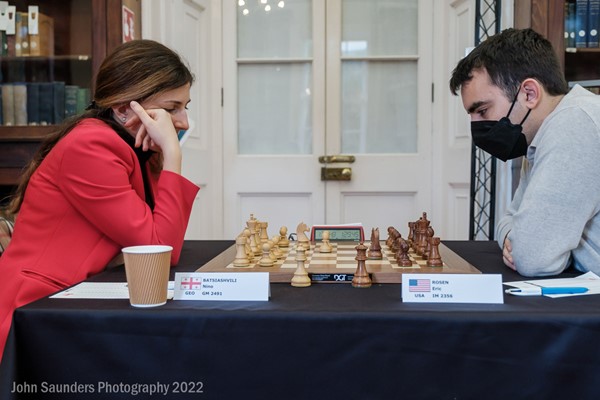 Now two points down, Team Pia’s situation didn’t look like improving. Leandro Krysa was soon joined in the winners’ enclosure (a.k.a. the interview room) by Eric Rosen, who defeated Nino Batsiashvili in 41 moves in a Nimzo-Indian crossed with a Queen’s Indian. White opted for a Stonewall type set-up but her adoption of the offbeat 13 Bb5 did lead anywhere special and Black imperceptibly gained ground on the queen side while White’s kingside pressure proved illusory. Eventually a tactical shot presented itself and Black took the chance. The game wasn’t quite over and some loose ends needed to be resolved but Black did so admirably. Altogether a very smooth effort from the popular YouTube streamer and I was grateful for his clear exposition of the game and the way he politely overlooked the various blunders I suggested during our enjoyable session in the interview room. For all these reasons I feel obliged to award this my own personal (albeit intangible) game of the day award. 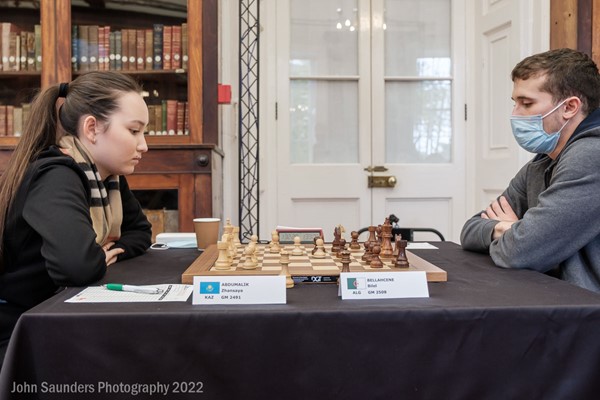 Zhansaya Abdumalik hasn’t tasted defeat in Gibraltar for a very long time but she was soundly beaten by Bilel Bellahcene, who played a French Defence. White snatched a pawn in something close to a familiar Winawer position but lived to regret it. White’s queen was chased into passivity. It took a little while but eventually Black achieved an easily winning position. That gave the men’s team a fourth point without (decisive) reply.

Team captain Pia Cramling looked in some danger of losing at one point, playing Ravi Haria in a Ragozin QGD, but she defended resolutely and eventually hung on for a draw in 44 moves.

The longest game of the day, at 52 moves, was Mariya Muzychuk vs Bobby Cheng, a Bb5 Sicilian. The position favoured Black briefly, then White, before fizzling out to a draw.

Now doubt buoyed by this big success with the black pieces, the men’s team will expect to do even better when placed back in charge of the white pieces. Or is having White an advantage any more? It’s all very unpredictable. I think I’ll go and lie down now until normal service is resumed.

Play continues in round four on Thursday 27 January at 15.00 CET.