Gibraltar basketball once again had something to cheer about as. both the men and women's team came out winners.
Once again it was a packed house for basketball. After Sunday's large attendance organisers increased the seating capacity.
Seats across the sidelines where however still not enough, with security forced to restrict the number of persons wishing to enter. A police presence was also visible as a precaution because of the large numbers attending.
First up were the women's team who played Jersey. This proved to
be somewhat of a walk in the park for the Ladies. Their determination on confidence showing through after their win the previous day.
Taking the first quarter 23-14, Gibraltar went on to further increase their lead by halftime to a 46-21. There was little slowing them down, playing with six players, five on court and a full home took them to a 74-27 lead.
Jersey only able to add six points to their score. Things didn't get any better for the visitors who saw Gibraltar score another 21 points against their seven.
"If you had told me we were going to be in the semifinals after today a week or two ago I would have thought you were thinking to go ahead, but we are," comment Gibraltar's head coach Luis Romero more than happy with his teams performance he had praise for all his players describing them as "extraordinary."
Their next match tommorow against Menorca, the current group leaders, will be a formality with both teams securing their place.
With the crowd already buzzing it was the turn of the men. This time against Menorca. A win would secure top place in the three team group.
Gibraltar felt the strength of play of Menorca from the start as the visitors scored in quick succession. However, with a very vociferous crowd behind them Gibraltar rose to the ocassion.
it had not escaped many that Menorca were a Spanish team, this becoming very much a Gibraltar v Spain affair.
An intensity was seen in the match as Gibraltar equalised at 15-15.
They were not to let go as they pointed the quarter at 21-18.
Gibraltar was to feel the pressure but strong play and a good distribution of the ball was equalled by a passion for wanting the ball and winning it.
Gibraltar threw everything into it and they were rewarded with a 44-33 half time score. They were not to let off on the pace as they steered to a 61-45 third quarter finish and finally on 80-57 victory.
The match had attracted the attention of many including the Chief Minister,and Minister for Sport. The victory ensured they took the top spot in their group.
Gibraltar’s match against Menorca will start just twenty minutes before St Joseph FC play against Rangers at the Victoria Stadium. With both matches due to see a large number of people attending both events security is expected to be increased around the stadium to ensure the safety of fans.
With the Island Games also hosting tennis inside the MUGA area the whole stadium will be a hive of activity which has already raised concern among organisers, especially with the fact Rangers are believed to be traveling with a very large number of fans for their first match in the Europa League this season. 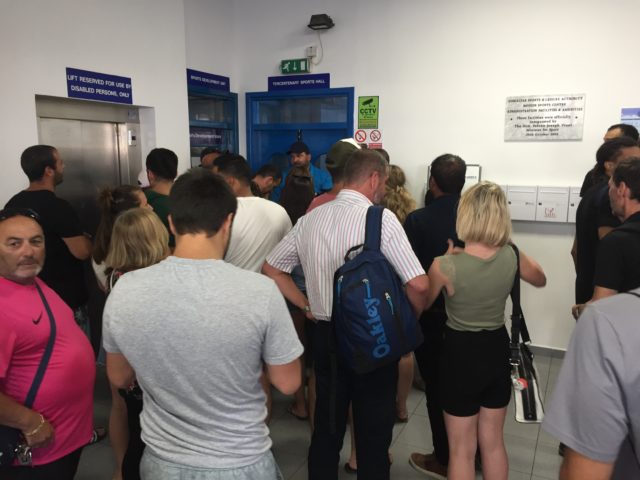