Gibraltar started their ICC Men's T20 World Cup Sub Regional Europe C Qualifier campaign with a defeat against hosts Belgium.
After Belgium had won the toss and chosen to bowl Gibraltar finished their batting with a 139/5 (20 ov).
Belgium made swift work of it as they tallied the points with their six’s and fours in quick succession.
They were to finish with a 142/3 (12 ov) winning by seven wickets.

The ICC Men’s T20 World Cup in 2024 is set to feature a record 20 teams.
Eight spots will be decided by the regional qualifier events. This will include two teams from each of Africa, Asia and Europe, while the Americas and EAP regions will each have one team make it to the World Cup.  ICC Men's T20 World Cup Sub Regional Europe Qualifier Group C has 8 teams participating, namely hosts Belgium, Denmark, Gibraltar, Hungary, Israel, Malta, Portugal, Spain. The Qualifier A consists of Italy, Sweden, Finland, Greece, Croatia, Romania, Isle of Man, Cyprus, Turkey and Serbia while Qualifier B comprises Guernsey, Austria, Luxembourg, Bulgaria, Slovenia, Norway, France, Czech Republic, Estonia and Switzerland.
Gibraltar opened up their campaign with a tough encounter and will now look to their next match tomorrow against Denmark.

The hosts come off the back of a 3-0 series win against Malta, and at the end of last year finished runners-up in the European Cricket Championship where they lost to an England XI. 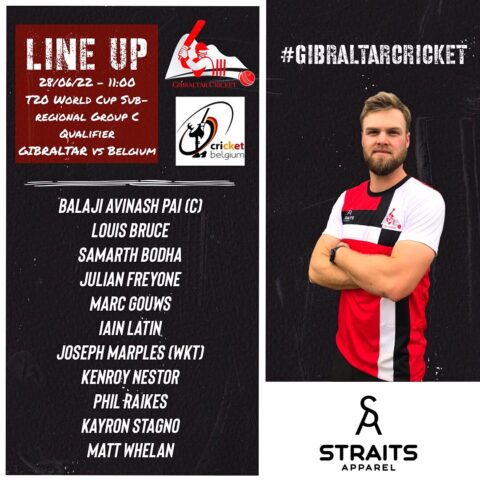