A dubious yellow card which saw Tjay De Barr receive a yellow card in the match against Turkey when most onlookers believed a foul should have been given instead for Gibraltar will see Gibraltar face Norway without De Barr.
A constant threat to oppositions in the latest two matches De Barr’s presence upfront for Gibraltar has tantalised fans. His absence leaves Ribas with a tough choice on who to put upfront. Reece, although coming on in the latter part of matches has not often been a preferred choice in the starting eleven, although he is the most likely candidate.
Unlike De Barr, whose skill gets him past players and has had more than one top defender with a battle on their hands, Reece offers more of a physical presence with his built. Less active across the field and more of a traditional centre forward Gibraltar’s attacking options will have to differ to adopt for his presence if Ribas was to opt for him.
With Lee Casciaro also injured the only other true forward is an inexperienced Kelvin Morgan although his physical built and agility when he gets to control the ball at his feet and his shielding has proven very effective at club level. He will, however, have to check his physical challenges which have many a time got him into trouble. This same presence, however, very effectively used during his appearances with the national team where he has won headers at crucial times. He has also shown in training a capacity to work within Ribas formation and moving about with the team rather than lagging behind as sometimes seen with players such as Reece. Morgan, however, still lacks the international experience, which itself might become a reason for using him as Ribas continues to look to provide players with international experience rather than sitting them on the bench.
Riba’s other options could come in other forms with Ronan also known to have been played upfront as well as Jamie Coombes.
Gibraltar’s biggest concern will, however, be in defence where tiredness and injuries will most likely play a role in any changes. A return of Jamie Bosio and Annesley after suspension will provide a return to the formation adopted against Latvia if necessary. Mouehli, having played alongside Roy Chipolina could also be an option to rest Roy Chipolina or Scott Wiseman both of whom have bourne the brunt of two weeks of top level football with both club and country.
With Joseph Chipolina also fit to play and the possibility of a return of Jayce Olivero any injury concerns with Ethan Britto could also be filled if necessary, providing also fresh legs.
However, there will be little known as to who Ribas will field on the day with the Gibraltar head coach very much known for protecting his options until the very last moment.
Norway will be looking to do better than they did in Gibraltar where they put three past them. With the top of the group at stake, with Turkey playing Netherlands, Norway know that this could be a great chance to stay in contention and build on their goal difference. Something which Gibraltar will be very much aware of themselves and will be looking to stop.
Haaland’s two goals during the five European qualifiers, with the fact he did not score against Gibraltar will be among one of the things on everyone’s mind. Haaland scoring only one during play and the second coming from a penalty. Norways’s seven goals in total from the five matches played in the European qualifiers equals that of Latvia in the group as the second lowest after Gibraltar who have scored two. With the Netherlands with an eleven goal difference compared to Norway’s three, the hosts will be pressured to find the net against Gibraltar if they are to try and stay apace with Netherlands and Turkey.
The resilience of Gibraltar’s defence will be crucial to determine how Gibraltar will fare. With lessons learnt from the two previous internationals against Latvia and Turkey Gibraltar’s defence have tightened in defence from one match to the next. The biggest concern will be on the physical fitness of players on whether they can produce another 90 minutes against one of the top teams in the group when players have as yet to even start their domestic season. The triple international headers have already cause concern among top sides, with even greater concerns among teams with smaller squad options, such as Gibraltar. 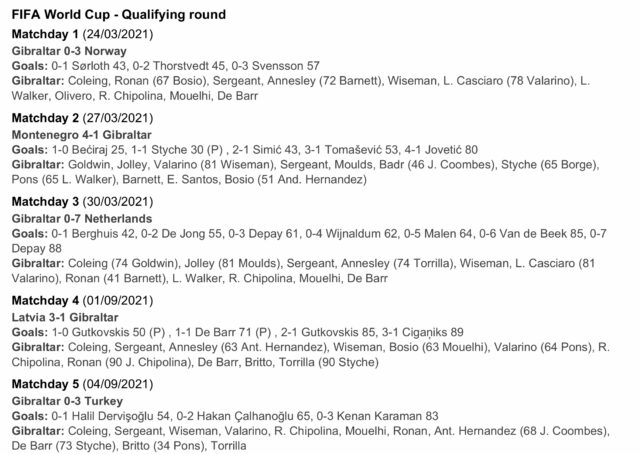 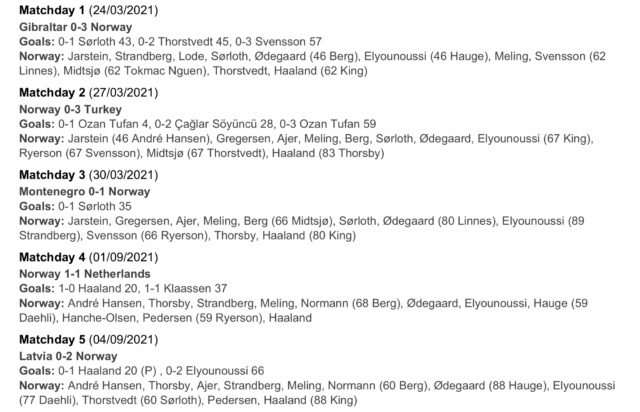