Finals Day Match Report
Gibraltar PSA Women’s final
Marta Dominguez Fernandez (ESP) vs Alison Thomson (2) (SCO)
The women’s final featured second seed Alison Thomson against the unseeded Marta Dominguez Fernandez. Both players had had a relatively trouble free route to the final, Thomson not having not dropped a game whilst Dominguez Fernandez had only dropped one.
Thomson started strongly building an early 4-0 lead. Dominguez Fernandez recovered back to 4-3, for Thomson to put the pressure back on stretching to a 9-5 lead. Thomson pushed on taking the first game 11-7.
Game 2 saw an exchange of points to 5-5 when Thomson edged ahead to 8-5. Again the players swapped points up to 10-7 with Thomson converting the game ball to take the game 11-7 and a 2-0 lead.
Thomson started the third game convincingly putting together a 5-1 lead, but Dominguez Fernandez recovered back to 5-5 and then built her own small lead 8-6. Thomson retaliated to take a string of five points to take the game and be crowned Gibraltar Open PSA Women’s Champion.
Gibraltar PSA Men’s final

Nick Wall (2)(ENG) vs Ivan Perez (6)(ESP)
Like the women’s final the second seed, Nick Wall had not dropped a game en route to the final. His opponent however had battled through three 5 game marathons.
Wall took an early 4-1 lead, Perez recovered but Wall continued to add points getting a 9-6 lead converting this to an 11-7 first game.
The second game started with an exchange of points to 3-3, but Wall crafted a 9-4 lead disguising his shots beautifully to take control of the game. Perez saved the first game ball at 10-5 but Wall converted the second to take the game 11-6 and a 2-0 lead.
Perez needed to stamp his authority on the third game and took a 3-1 lead. Wall soon closed the lead taking his own 5-3 lead. The scores levelled at 6-6. Wall took a string of four points to get match ball at 10-6 winning the point to take the match 3-0. 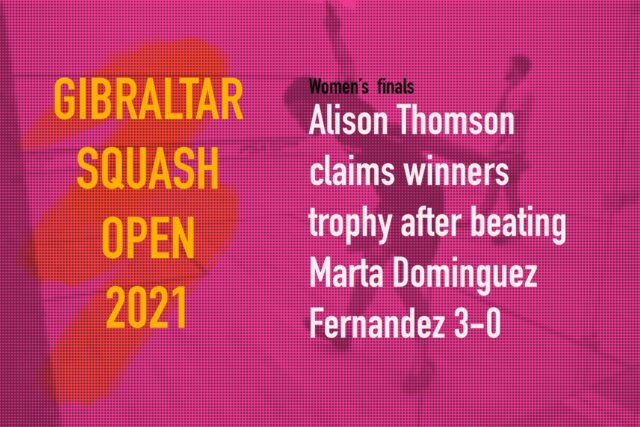