Gibraltar’s crew of Tester and Viñales were to finish third in the Final B of the men’s double sculls at the World Rowing Coastal championships held in Portugal.
Racing against crews from Spain, Netherlands, Monaco, Ukraine, USA, Finland, France, Croatia, Germany, Italy, Tunisia and Sweden Gibraltar provided a top class performance maintaining second place throughout the better part of the race and only beaten on the physical onshore sprint finish where Ukraine’s runner was those seconds faster to finish.
The Final B was raced for Places beyond 20 in the overall rankings from some 72 crews competing.
At the start the Gibraltar crew came back from being behind Germany, Spain and Ukraine’s to climb to third. Clever navigating keeping them away from trouble in what as chopping and difficult conditions to race.
They were battling it out alongside the Tunisian crew in the first stretch of the race towards the first Buoy. Tunisia were caught by current at the first buoy as were Ireland and Germany.
It was Monaco that took the early lead taking a wide berth of the buoy whilst other vessels were caught by the strength of the current. The leaders opening a comfortable gap.
Heading to the second buoy Gibraltar were in second place after having also navigated well around the buoy. A thirty metre gap between themselves and the Monaco crew had already opened up by this time, with Gibraltar holding on well in second place with some twenty metre gap between them and teams like the Netherlands who were pushing from behind.
With the swells and wind picking up the battle for second place heated up as Gibraltar was challenged by Ukrainian side that were closing down on them along with crews like Sweden, Netherlands and the second Monaco team also closing the gap.
The leading Monaco crew were two marks ahead as they entered the sixth mark as they entered the downwind stretch.
With Monaco with clear water between themselves and the rest of the field and taking first place with ease, the biggest battle was for second place with the Gibraltar crew holding on to second place as they arrived to the shoreline with Ukraine neck and neck with them.
Ukraine was to take second place in the beach sprint finish edging past the Gibraltar runner on the sand. Just seconds later Sweden was to come through for fourth. Less than half a minute separated second placed Ukraine from fifth placed.
Gibraltar were unfortunate to have lost out on a second place finish by just three seconds. Tester and Viñales providing a top quality finish to their debut participation in this Championships. Their third place finish in the Final B leaving them within the top 25 from a field of 72 crews in their first attempt. 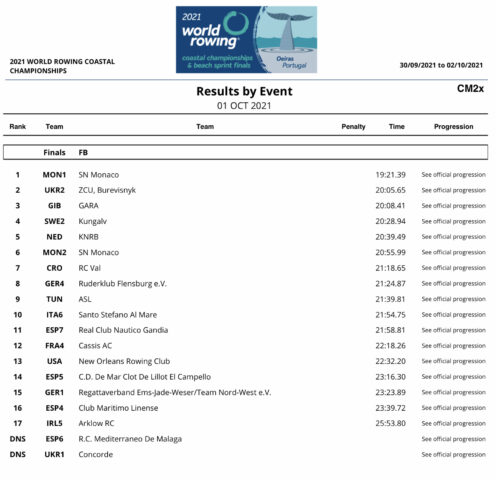