The GSA got the Christmas period off to a fine start with its annual Christmas “Jamón” tournament with festively named teams all competing to take home a prized jamón.
The tournament started with a league section to determine the teams that would progress to the knockout. Seven of Santa’s reindeer-named teams pulled through to the knockout phase (Blitzen, Prancer, Donner, Dancer, Cupid, Comet and Vixen). They were joined by team Fairies who flew into the last round with the highest points difference.
Team Rudolph, however, did not qualify and without his red nose to guide them in the knockout stage, four of the reindeer lost their way in the quarter finals and were beaten by either the Fairies or by other reindeer teams, with Comet and Dancer losing in the semi-finals.
The final saw the last remaining reindeer team Prancer (Colin Davis, Dennis Clinton, Christian Navas (jnr) and Jesse Sanchez) trying to make sure that they were top of the Christmas tree rather than the Fairies – Christian Navas (snr), Mark Bacarese, Mike Simmons and Ambroise Albert.
The first two games were Jesse Sanchez vs Ambroise Albert and Christian Navas (jnr) vs Mike Simmons. Navas and Sanchez won their games convincingly for Prancer, giving the team a strong 35 point head start. This meant that Christian Navas (snr) and Mark Bacarese both had to win by substantial margins, and whilst scoring higher in both games (+1 and +8) they did not score enough to overturn the deficit and team Prancer added the jamón to their sleigh.
The evening was also used to make the presentations for events that had taken place under stricter COVID restrictions such as the Team League event and the previously reported Gibraltar Closed tournament.
The winning team for the Gibraltar Team division 1 event was team Astralship consisting of Marcus Hall, Noiky Roberts, Tony Gardner, James Howard and Mark Torres.
The winning team in the division 2 event was team Bavaria consisting of Alex Vasquez, Gareth Gomez, Chris Hedley, Anthony Morris and Philip Vasquez. - GSA 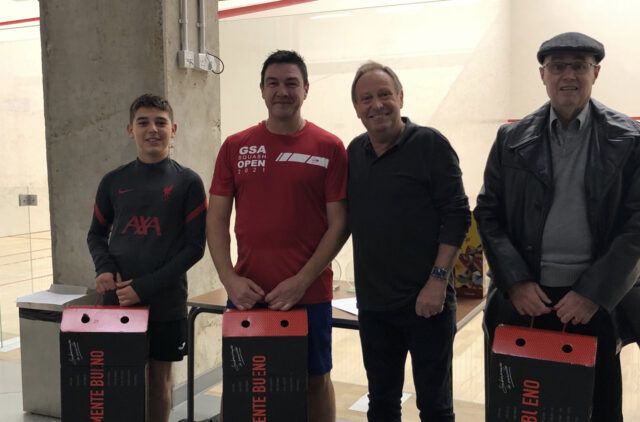