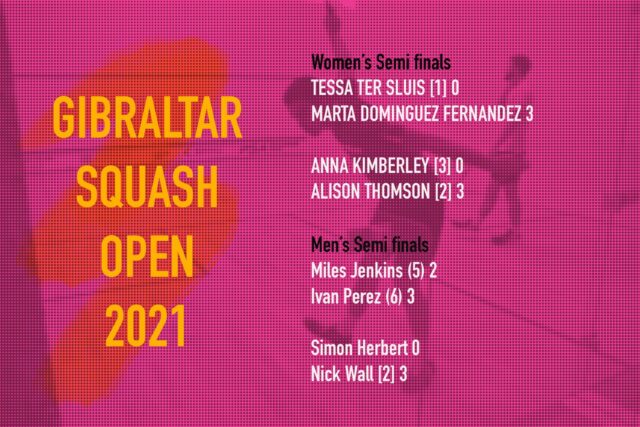 Gibraltar Open PSA Women’s Semi Final
Anna Kimberley (3)(ENG) vs Alison Thomson (2)(SCO)
The first women’s semi-final of the day was between the 2 and 3 seeds. The first game started off with points being exchanged to 9-9. The first game ball went to Thomson and was converted taking the game 11-9.
Thomson took an early lead in the second game and powered through to a 10-2 first game ball, converting the second one to take the game 11-3 and a 2-0 lead.
Thomson kept taking point after point in the third game building a 9-0 lead before Kimberley got on the scoreboard. Thomson eventually taking the game and match 11-1.

Gibraltar Open PSA Men’s Semi Final
Miles Jenkins (5)(ENG) vs Ivan Perez (6)(ESP)
With both players so closely ranked in both seeding and world ranking this game promised a real battle. The first game was characterised by long rallies, each trying to get their opponent out of position. With both players showing such excellent retrieval skills this meant exhausting long rallies. Jenkins edged ahead to get the game 11-7.
Jenkins built a 6-3 lead in the second game but Perez recovered to level at 6-6 and continued to get his own 3 point lead 9-6. Jenkins recovered to get game balls at 10-9, 11-10. Perez returned with game balls at 12-11 and 13-12, converting the last one to level the game 1-1.
Jenkins started the third in excellent form linking point after point after point to win the game 11-0.
Perez came back into the game in the fourth taking a 5-3 lead. This lead was extended to get the first game ball for Perez at 10-6. Jenkins recovered all of the game points to level the game 10-10 and get the first match ball 11-10. Perez came back again winning the next three points to take the game 13-11.
Perez worked a 7-3 lead in the deciding game. Jenkins recovered to 7-7 only for Perez to put together a string of points to get match ball at 10-8. Perez won at the first time of asking and progressed to the final