Gibraltar U21 faced 5-0 defeat at hands of Bulgaria

Jaylan Hankin was from early on in action as Gibraltar under 21 took on Bulgaria away from home.
An offensive looking Bulgaria went looking for a quick goal.
However, Gibraltar found themselves claiming for a penalty within the first five minutes after a quick break saw Bulgaria’s defence down an attacker.
Just as quickly Bulgaria in the next game play went ahead after a save from Hankin was not cleared by defenders leaving for an easy tap in to goal.
Just a minute later Hankin was again in action a quick hand-out-reflex save clearing a header bound for goal. This time his defence reacting well.
Forced to defend deep Gibraltar’s under 21s tightened at the back closing Bulgaria’s path to goal.
Gibraltar’s lone attacker waiting for an opportunity to break. The defensive wall created in front of the penalty box slowed down Bulgaria as they entered the first twenty minutes of the match. Gibraltar getting a chance to have a bit more of the ball momentarily.
Gibraltar concedes two consecutive goals as they reached the half hour mark going 3-0 down.
With thirty four minutes gone Bulgaria found their fourth goal after opening Gibraltar’s defence.
Bulgaria went into the halftime break with a 4-0 lead.
Jaylan Hankin was in action once again early in the second half blocking a break into the penalty area.
Bulgaria added their fifth on the hour mark after continuing to pile the pressure on Gibraltar. Gibraltar by then playing with ten men after Montovio had been sent off with a second yellow.
It was backs to the wall as Bulgaria controlled possession and dominated looking to add to their tally.
The final ten minutes Gibraltar were deep within their half defending inside their penalty box Gibraltar holding on as Bulgaria finished with a 5-0 victory. 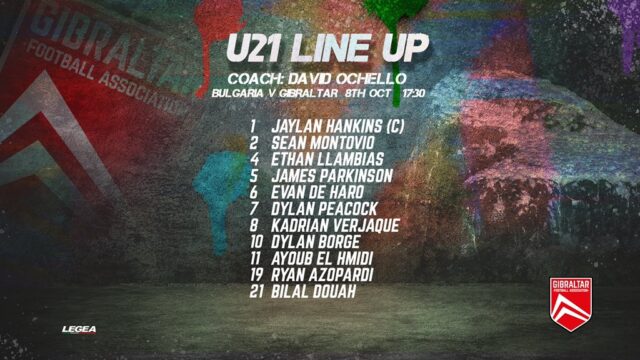