Finland opened the scoring in the third minute after dominating possession from the start. Playing into the penalty area and collecting by the penalty spot Finland’s attacker turned on the penalty spot to thunder into goal past defence and keeper.
The hosts had started strongly dominating play but without any significant urgency as they build their attack.
Gibraltar’s U17 were penned back into their half absorbing the pressure before they launched their first attack after ten minutes.
Although already one goal behind Gibraltar kept their composure and didn’t panic at the back.
A magnificent save on the ninth minute saved Gibraltar from what seemed a certain second for Finland. The keeper diving well to palm out a shot just feet from goal. Gibraltar’s youngsters responded with their own counter attack.
Structured on the field very much like the senior national team Jansen Moreno’s boys waited for their chance to counter. Long balls to Bartolo, however not reaching him as Finland returned to add more pressure on Gibraltar’s defence.
Finland threatened to add their second but with Recagno and his defence equal to it during the first twenty-five minutes. Finland’s main chances came from attempts from the edge of the box.
Growing in confidence Gibraltar started to venture forward. First winning a corner and then returning after the clearance to have crack at goal from distance. The shot going wide.
Gibraltar were lucky not to concede the second on the half hour mark with the ball scrambled away from the goal mouth and hitting a Finnish player on the arm before it was pushed over the line. The referee disallowing the goal.
Adding pressure further forward a more confident Gibraltar started looking for a route to goal. Three attempts going wide off the target.
Gibraltar were penalised with a penalty with five minutes left on the clock for half time. Finland adding their second before half time.
On the 45th minute Richards run past defenders to the edge of the box hitting a low drive past an outstretched keeper but just inches on the other side of goal in what was the last opportunity before half time.
The second half started very much on the same footing as the first had finished with Gibraltar absorbing the pressure.
Under the breezy Finnish afternoon sunshine Gibraltar’s under seventeens were effectively keeping the hosts from venturing into goalscoring positions during the early part of the half.
A mistake in passing placed goalkeeper Recagno under pressure as Finland upped their pressure as he received a back pass. Gibraltar again lucky not to concede, the subsequent shot deflected for a corner.
Having weathered the storm Gibraltar had its first chance to go forward on a break down the wing seeing a cross into the centre unable to be met by a clear header as the Gibraltar forward slipped, only able to place the ball as a pass which was cleared by Finland’s defence.
Just a couple minutes later a long through ball was well chased and won by Bartolo whose subsequent shot was well held by Finland’s keeper.
Finland responded with a quick break with a shot going just past the top corner.
Reaching the hour mark Gibraltar started to venture forward more feeding several long passes to Bartolo to chase with Finland’s defence forced to keep players back.
This opened up the game more with Gibraltar with more opportunities to try and venture forward on the break. Gibraltar’s defence were still kept busy as Finland looked for their third.
Gibraltar although living some difficult moments in defence held their own and were breaking from deep as their confidence grew with just fifteen minutes left. This reducing Finland’s effectivity in attack as they advanced with less men behind the ball.
After months of training, and a week together in Finland Gibraltar’s under 17 displayed greater confidence on the field as they entered the final ten minutes. They were, however, dealt a further blow as Finland scored their third from a corner flung deep into the goalmouth. Headed in from within feet of the goal line. The mistakes which had cost them heavily in previous matches were, however, not seen even as tired legs were seen with players focused on their task at hand against a determined host team looking to inflict a heavy defeat on their guests. Having drawn their previous two matches Finland were looking for the points and goal difference to count as they hoped for a favourable result from the other group match between Bosnia and Switzerland which could still see them joint in points.
Gibraltar’s young defence kept their heads and blocked Finland’s path to goal as they intensified the pressure further in the final minutes.
Finland were to score a final goal in injury time hassling their way to goal from a floated free kick into the penalty area. Finland walked away with a hard fought 4-0 victory. Gibraltar’s under seventeens unlucky not to have come away with at least a goal from this encounter. 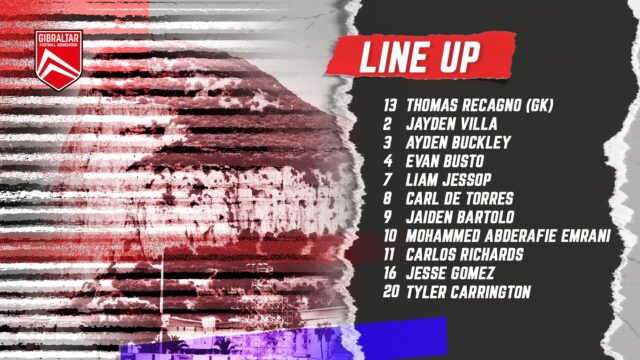