Gibraltar women’s football gets boost with five clubs in league

The women’s domestic league season kicks-off this Monday with a further boost to women’s football with the first match seeing two debutants to the league taking each other on.
Five teams will be competing in this season’s league with Gibraltar Wave and Manchester 62 adding to the Lions Gibraltar, Europa and Lynx list from last season.
For Manchester 62 this is a return to the league after a number of years since the club decided to withdraw its women’s senior team from competition.
The club continued its development of female players at youth level with teams in the junior leagues, some of the players now understood to have progressed through into the senior side.
Gibraltar Waves makes its debut in the league after having started last season with a team in the Futsal league.
Under the reins of Andy Parody the team is seen as an “exciting package” which has already shown to have developed quickly into a discipline well formed side, according to Gibraltar women’s football observers.
Both Gibraltar Waves and Manchester 62 kick off the women’s division with the first match at 630pm. The league will then see Lions, last year’s champions take on Lynx in what is expected to be an exciting start to the season.
The presence of five teams in the division comes at a crucial time as Gibraltar’s national squad also look at further international matches this Autumn. At a time when at least six to seven national squad players are playing in both Spain and the U.K. the additional teams is seen as a confidence boost for women’s football with clubs already calling on the Gibraltar FA to consider the inclusion of Gibraltar within UEFA women’s European club competitions.
The boost in the number of teams in the league comes after a big push by the Gibraltar FA in developing women’s football in recent years. With more opportunities opening at grassroots level, including the inclusion of the under 16 squad within the boys youth league and academy sessions, more and more younger players have been involved in the game. Recent successes by the national team especially in Futsal have also brought women’s football to the forefront adding to the interest in the sport. 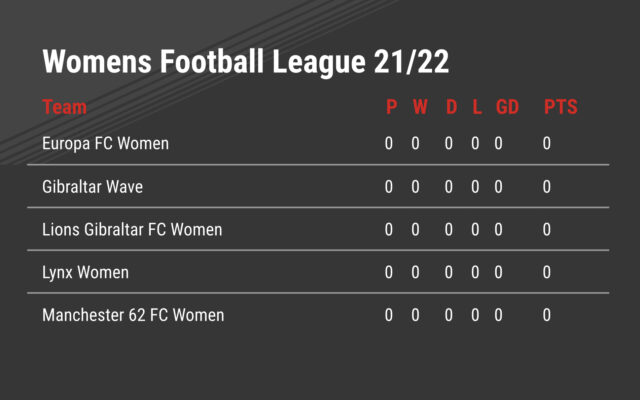