Gibraltar’s U21 do themselves proud even in defeat

A Portugal U21 head coach walked away from the bench at the end of the ninety minutes without acknowledging or recognising his opposite number. His frustrations had been clearly visible towards the latter part of the match as he bellowed instructions to his players. Portugal’s Under 21 had been favorites to win, by a substantial margin according to some pundits. A 5-0, 6-0 or even higher had been on everyone’s lips. A team with players valued in their millions, playing for teams such as Milan, Tottenham, Atletico Madrid, Liverpool, Benfica, Braga and Wolves among others, some already appearing in the first eleven for their respective clubs was taking on the “minnows” from Gibraltar. A side made from youngsters creeping up the ranks in a semi-professional league, some only now starting to make it into the first eleven of their own clubs in some cases. Only a handful of players actually now finding their way into the first eleven.
However, Gibraltar’s Under 21 brought onto the field a resilience and determination which was to leave many praising their efforts. Months of after hours coaching. Frequent national squad coaching and training sessions alongside the national team had started to find its roots among the team which was already showing the player pathway Gibraltar’s national players across all categories had started to build as their foundation blocks.
The mistakes seen in senior matches which had led to heavy defeats, the errors and attitudes which had allowed for heavy defeats to be followed by “praises and acceptance” were being put to one side with a new attitude which has seen confidence levels grow as Gibraltar succeeds in closing the gap against other teams at their own level.
A disciplined, composed performance which saw the youngsters focused for the ninety minutes and not letting their heads drop, even when they went behind early, left Portugal frustrated not to have scored more than the three as they had been expected.
The introduction of Jayce Olivero, Tjay De Barr, El Himidi and Ronan who had travelled and played in the senior squad last week was to prove a turning point for Gibraltar. Although criticised by some for the fact it removed opportunities for players who had played against Netherlands last week, the four were still very much part of the Under 21 category and had graced through it to reach the senior team.
Gibraltar’s Under 21 followed the steps which the senior team had already started to take in playing to demonstrate that they are worthy adversaries for anyone, even the biggest of opponents.
Gibraltar’s U21s, like other teams had done in the past, walked to the stadium highlighting that they were keeping their feet firmly on the ground. The clear contrast between the professionals of Portugal arriving by coach was seen as the likes of Tjay De Barr and Jayce Olivero walked with the rest of the team, many still under 19s to the stadium.
With this summer’s restructure now seeing the senior and Under 21 players all working under the guidance of Julio Ribas during training and coaching sessions there was a natural transition between both squads. This made the decision for David Ochello, the Under 21 coach, an easy one to make as he brought In players who had graced the senior squad into his under 21 squad.
The presence of Bradley Banda who had played for the Under 21 last week and travelled to Liechtenstein was also to prove of value as the players added a level of confidence and discipline which flowed through the ranks. Banda’s presence in goal adding confidence to his defence as his seventeen saves, and firm presence at the back afforded security to his defence.
A goal from Jota on the 16th minute should have sank Gibraltar. The flowing, precision passing from the Portugal under 21 had many watching mesmerised, yet it was not to prove the fateful element which in the past would have seen Gibraltar picking the ball up from the back of the net so often. Although a daunting task, Gibraltar’s players, with little to lose, enjoyed the experience as they did not flinch from undertaking the path they had been set.
It took Portugal until the 50th minute to get the second goal. It was one which Gibraltar learnt a hard lesson in how not to take risks against the Calibre of players they had before them. Trying to play out from a goal kick when the opposition where firmly staying by their penalty box proved a mistake as Pote ended up striking for goal after Gibraltar literally lost the ball within their own penalty box.
Once again, a mistake which would have sank Gibraltar’s players in the past, instead saw them react and refocus.
Solid defending and hard graft across the field kept Portugal out until the 80th minute. Even then, when Portugal seemed to be getting a swing for a higher scoreline, Gibraltar once again effectively closed their opponents and gave them few opportunities to score. The ones they did have in reaching their intended target were dealt with magnificently by Bradley Banda. At one point the Gibraltar keeper brought out to consecutive blocks which had Portugal’s players with their hands on their heads as they wondered how they could break past Gibraltar once again.
Portugal who needed the goals to try and challenge the Netherlands found themselves frustrated even through the additional extra minutes of injury.
Gibraltar’s U21s might have come out defeated by a 3-0 scoreline in their own home ground. However, the many positives seen through the attitudes and the discipline shown by players led to much praise after the match, including some of the senior squad who took up to social media to congratulate them on their performances just minutes after the final whistle. 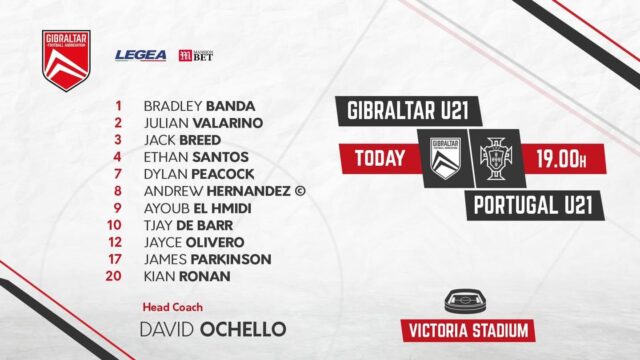 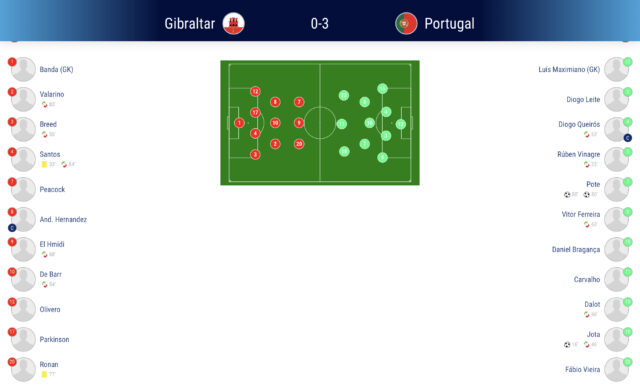 Gibraltar Under 21 drawn in group E alongside Wales and Netherlands