The side effects of developing a national squad for the future with many a young player transitioning into the senior squad became evident with the under 21s encounter with Switzerland.
With the senior squad already having played with five under 21 players this week David Ochello was never able to play what many would consider the best under 21s. However, the under21s were now becoming a stepping stone for the transition into the senior squad.
Matches such as that played this Friday evening against a strong Swiss team added to the experience being gained by players.
Gibraltar’s under 21 were on the backfoot from the early minutes of the match as Switzerland U21 took an early lead. A through ball chased by Llambias and with Hankin coming out also saw both beaten by a fast paced Janetwitz sticking a toe in to divert past Hankin. A lack of communication between defender and goalkeeper leaving both exposed.
Gibraltar were on the defensive as from then with a confident Swiss side pressing forward and testing Gibraltar.
Hankin made an important intervention coming out to block at full stretch on the quarter of an hour mark ensuring the Swiss had only one goal to show at that time. Gibraltar’s defence holding well and playing with some confidence in the tackles.
Settling down into the game Gibraltar closed down and were starting to make make life more difficult for the Swiss to arrive into the penalty box. Hankins confident handling with long balls into the box further adding to their confidence in those early moments of the match.
Gibraltar’s defence was rattled when after twenty minutes and having settled back well found a Swiss free kick smashed onto the post with the rebound hitting Hankin and going for a corner.
It was not long after that Hankin was again called into action blocking with his feet an attempt from inside his goalmouth where the defence had been unable to clear the danger.
Within a minute, once again seeing the ball not cleared away from the danger area Kronig was left with enough space and time at the edge of the box to choose his spot and smash a drive to the top corner for the 2-0.
Within five minutes Switzerland had another chance this time with the ball smashed over the crossbar as Gibraltar became unsettled at the back.
The constant pressure persisted from Switzerland with the third coming in the 35th minute. Hankin’s first intervention saving only to see the ball rebound to a Swiss player who had been left alone and unmarked in front of goal as Gibraltar’s defence reacted late to defend after Hankin’s save.
Gibraltar held on until half time and were to return to the field with a greater focus in defence during the early moments of the second half.
Dylan Borge also coming on after half time.
A harsh penalty awarded against Gibraltar on the 65th minute saw Gibraltar’s keeper come up with a fantastic save to deny Switzerland their fourth. The young keeper, now playing at Cordoba, was at full stretch to reach the ball and clear towards the far side, well away from goal.
A tighter more compact defensive display had silenced the small Swiss crowd at the Stade de Tourbilllion in the early stages of the second half as they denied Switzerland the opportunities.
Easy to go to ground Switzerland we’re grabbing free kick opportunities as the inexperience of Gibraltar’s defence showed at times baited into situations.
Playing in a formation which highlighted the influences of the work done behind the scenes by senior head coach Julio Ribas Gibraltar were closing down space and not allowing the hosts space to enter their penalty area.
A foul at the edge of the box on the 76th minute saw Gibraltar defend well the initial shot, however, with the ball flung into the area again some weak defending allowed for what was a free header as the defender couldn’t reach to clear, with Hankin left with little chance of stopping the header to goal from just outside the six yard box directly in front of goal. Switzerland going 4-0 ahead.
An elbow to the face of Dylan Borg earned Sohm a yellow card. The subsequent free kick cleared and leading to a counter by the Swiss that ended in earning Montovio a yellow card , this whilst a Gibraltar player continued on the ground in front of Switzerland’s goal. As the Gibraltar player was eventually allowed to be attended to, the referee run across the field for the first time to warn the player and physio to hurry in taking the player off, this even though the player was to be stretchered off in the end raising questions over the official’s actions.
Gibraltar earned themselves a corner on the 87th minute. Easily cleared with the ball swung to the near post Gibraltar ended defending as they chased back. The Swiss attempt at goal well wide of its mark.
Gibraltar’s defence kept its composure as they entered a six minute injury time period. Another excellent save by Hankin, this time also supported by a defender directly behind him to protect the goal stopped the first wave of attacks from a Swiss team intent on adding to their tally.
With backs to the wall and bodies to the ball Gibraltar defended deep inside their half.
A well placed Hankin collecting the only shot Switzerland were able to make on target.
Switzerland were to walk away with a 4-0 victory but knowing that Gibraltar’s U21 had not made it easy for them and would be unlikely to make it any easier on Tuesday when they play at the Victoria Stadium.
Young keeper Jaylan Hankin’s performance will once again see pressure placed on senior head coach Julio Ribas to consider him for the senior squad as he continues to challenge for inclusion. The young keeper coming away with one of Gibraltar’s best performances on the field. 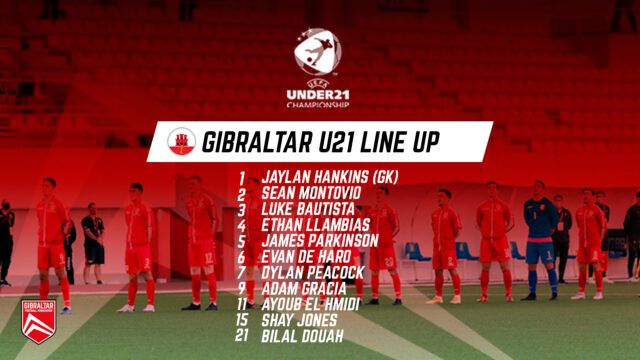