After many years of neglect the GSD government decided to beautify the Europa Point area. I was appointed Planning Supervisor for the project.

As part of the works the interior of Harding’s Battery was exposed and refurbished to a very high standard. The project was inaugurated in October 2011, the battery was opened for the inauguration and locked up following the ceremony and it remained closed. 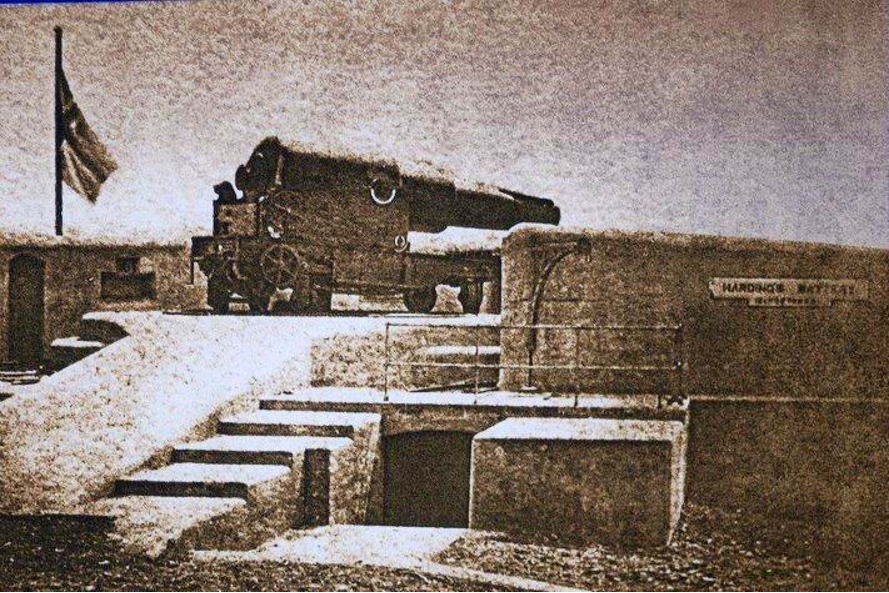 Following the change in government in December 2011, I, as Vice Chairman of the Gibraltar Heritage Trust and therefore with a very special interest in heritage matters, approached the new GSLP/Liberal Minister (and good personal friend) with responsibility for heritage, Steven Linares, and made him aware of the excellent works that had been carried out to the interior of Harding’s Battery.

The battery was finally opened to the public in June 2012 and Mr Labrador then insisted the battery was unfinished because it did not have a gun.

In consultation with the Minister he approached the Gibraltar Museum and had it confirmed that the original RML 12.5 inch barrel was lying on the seabed just off the cliff at Europa Point. He was advised that there was an identical barrel at the South Gate entrance to the old dockyard which could be used.

The Museum had obtained a couple of quotes for the manufacture of a replica carriage at a cost of just under £200.000. This amount was prohibitive so I approached Jorge Leiria, director of Casais (Gibraltar) limited for a quote (I had been professionally involved with Casais ever since they established themselves in Gibraltar for the construction of Ocean Village).

Casais carried out over 100 hours of research before presenting a detailed design and quote for the carriage, they concluded the gun had been manufactured by Armstrong at the Royal Gun Factory in London in the period between 1865 and 1870, with several improvements over its predecessors.

The weight of the cannon being approximately 38 tons and it was manufactured starting from a 12 inch cannon caliber, rectified to 12.5 inches. It was one of the first pieces of that caliber to incorporate rifling thus permitting a rotary motion to the shell for improved shooting accuracy.

The gun was used on either medium and large tonnage naval vessel, or shore batteries, due to this the carriage was different in each case; this added more difficulty in relation to the reproduction of the replica carriage.

Casais produced some very detailed designs for the carriage and quoted £60.000 for the manufacture of the carriage and transporting the barrel and placing the gun into position at Harding’s Battery; the complete project. I went to the Minister with the quote, however, the Minister, although very enthusiastic, was unable to provide funding without first presenting the item in Parliament at the following year’s estimates.

I thus went to his friend Jorge Leiria and asked him whether Casais, a corporate member of the Gibraltar Heritage Trust, would be willing to sponsor the project by £40.000.

Leiria’s reaction was immediate, he would be delighted to do so. I went back to the Minister and with his approval the process begun.

The outer structure was just an aesthetic frame with approximately 800 simulated rivets, however, the inner frame includes mechanical elements transferring the weight which rest on two points, the two side cores. Given that it was a front loading cannon and the shell had a considerable weight, a wagon was needed to transport it and load it, this element has not been included and may be incorporated at some later stage.

The manufacture of the carriage was completed in April 2013 and then went through a process to have it galvanized thus offering maximum protection to the sea water spray that it will be subjected to at Europa Point. It was finally ready in May but the project was delayed for approximately two weeks because there were difficulties in obtaining permission from GibDock to obstruct access/egress to the yard whilst loading the barrel and also travelling through GibDock. It took the Minister’s personal intervention to allow access.

Finally, on Wednesday 29 May 2013 the carriage was transported to Europa Point and at 2100 that day a heavy duty mobile crane arrived at the old Dockyard South Gate to carry out the lift. The gauge of the crane gave the load of the barrel at 45 tons and the final operation of transporting the barrel to Europa Point was completed at 0230 the following morning.

The convoy escorted by two police outriders travelled through the old Dockyard and around the Rock via the East side.

At sunrise that morning the barrel, already placed on its carriage and loaded on a trailer, was parked at the bottom of the battery ramp. A timber structure was erected to level the ramp between the vehicle and the battery and this was covered with metal sheets.

A series of pulleys were used to pull the gun into position as well as the crane which was used to push. The operation took the whole day to complete and was carried out by operatives from Casais under the direction of supervisor Jose Pinto. Once the carriage was in position each corner had to be lifted to allow for the direction of the wheels to be altered so that it would run on its rails.

The following day the barrel was painted and the carriage touched up and a flag pole with a Union Flag was erected.

The inauguration ceremony was held on Tuesday 11 June 2013 by Minister Steven Linares in the presence of His Excellency the Governor and some 80 guests which included among others, myself, Jorge Leiria, Gil Neves Lopes who had coordinated the project on behalf of Casais, Jose Pinto and the visiting Friends of Gibraltar Society. 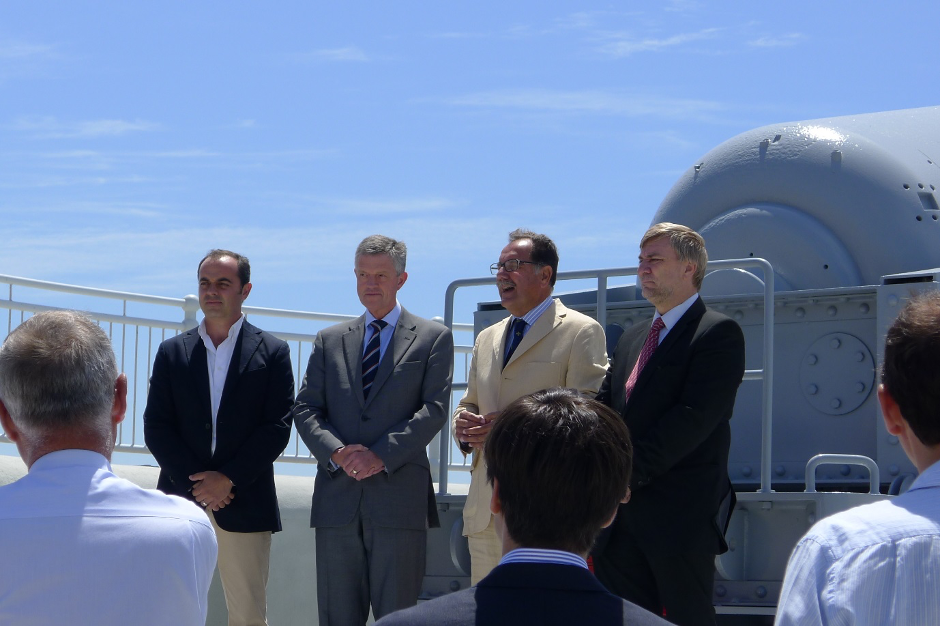 Over the years the gun has required maintenance and Casais Gibraltar Limited has always been at hand in order to keep the gun looking its best. Casais are currently back again removing rust, cleaning and painting the gun and its carriage.