By Laura Elston
The Duke and Duchess of Sussex are celebrating their second wedding anniversary.

Much has changed for Harry and Meghan since they said their vows in St George’s Castle, Windsor Castle, on May 19 2018, in front of the royal family, celebrity guests and a worldwide television audience of millions.

The Queen’s grandson Harry and former Suits star Meghan have welcomed son Archie Mountbatten-Windsor, who turned one on May 6.

But they also sparked the Megxit crisis and quit as working royals just one year, 10 months and 12 days after their high-profile wedding.

The couple opened up about their struggles dealing with royal life and the intense tabloid interest, in a television documentary about their Africa tour in the autumn of 2019.

Harry also addressed a rift between himself and his brother the Duke of Cambridge, saying they were on “different paths” and have good and bad days in their relationship.

After a six-week break in Canada, Harry and Meghan issued a bombshell statement in January this year without warning the Queen and the Prince of Wales, saying they wanted to step down as senior royals to earn their own money, while still supporting the monarch.

But the Sussexes’ plan was too controversial given their global profiles and was likely to have led to accusations they were cashing in on their royal status.

The Queen held an emergency summit at Sandringham with Harry, the Prince of Wales and William – but it was announced a few days later there would be no dual role for the Sussexes, meaning they would have to walk away from the monarchy completely.

From March 31 2020, Harry and Meghan stopped using their HRH styles and ceased to be senior working royals, in favour of a life of personal and financial freedom.

The couple, now living in Los Angeles where they have been in lockdown amid the coronavirus outbreak, are preparing to launch their new charitable organisation Archewell – named after their son.

It will replace their now-defunct Sussex Royal brand, but plans to launch the venture have been delayed while the world battles the coronavirus.

American former actress Meghan became the first mixed race person in modern history to marry a senior British royal when she walked down the aisle two years ago.

The Sussexes’ ceremony was a romantic, star-studded affair, with the duchess dressed in an elegant, minimalist boat-necked pure white wedding gown by Clare Waight Keller at Givenchy. 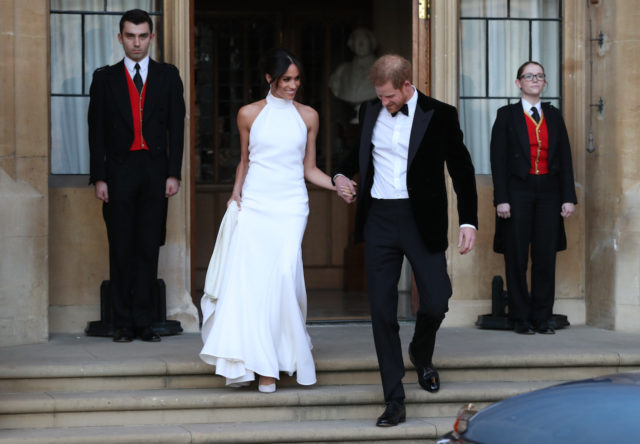 Her five metre-long veil featured flowers from all Commonwealth countries and was held in place by Queen Mary’s diamond bandeau tiara, loaned by the Queen.

An emotional Harry was captivated by his bride as they met at the altar, telling her: “You look amazing.”
Crowds flocked to see the newlyweds – the new Duke and Duchess of Sussex – who kissed on the West Steps of the chapel.

Dubbed a royal wedding like no other, the nuptials combined British traditions with diversity and modernity.
Sounds of a gospel choir filled the venue, with US preacher Bishop Michael Curry delivering a lengthy, impassioned, rousing address on the power of love.

Prince George and Princess Charlotte were among the pageboys and bridesmaids, and the Duke of Edinburgh, recovered from a hip operation, put in an appearance.

There was drama in the run-up to the big day, with Meghan’s father Thomas Markle pulling out of walking her through the Quire to the altar due to illness, and after being caught staging paparazzi photographs.
But the Prince of Wales stepped in to perform the symbolic role.

Thousands lined the streets of Windsor to watch Harry and Meghan as they went on a carriage procession in the Ascot Landau through the town and the Long Walk in Windsor Great Park.

The black tie evening celebrations – to which Meghan wore a glamorous lily white halter neck by Stella McCartney – were staged in nearby Frogmore House where 200 close family and friends partied the night away.
Second wedding anniversaries are traditionally marked with gifts of cotton.
(PA)