The Duke and Duchess of Sussex have marked their son’s first birthday by posting a video of Meghan reading to a beaming Archie.

With her son in her lap and proud father Harry behind the camera, Meghan holds the classic children’s tale Duck! Rabbit! – one of Archie’s favourite books.

Archie has rarely been seen in public and in the footage he smiles and grips the pages of the story, by Amy Krouse Rosenthal and illustrated by Tom Lichtenheld, which playfully asks whether an ambiguous image is a duck or a rabbit.

The video was posted on Save the Children UK’s Instagram page in support of the charity’s Save with Stories campaign, which aims to raise funds for children and families struggling due to the coronavirus crisis in the UK and around the world. 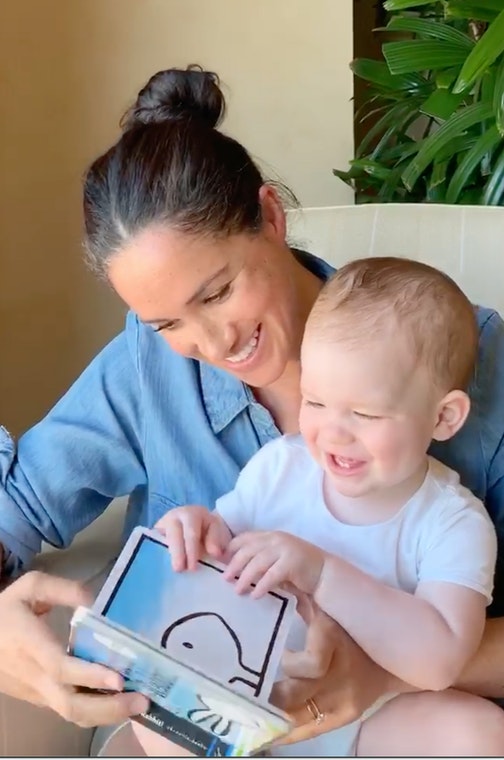 A caption with the video said: “‘Duck! Rabbit!’ with Meghan, The Duchess of Sussex (and Harry, The Duke of Sussex behind the camera), read to their son Archie for his 1st birthday. Happy Birthday, Archie!

“Thank you #DuchessMeghan for helping us to raise urgent funds for our coronavirus appeal by reading ‘Duck! Rabbit!’…”

The young royal sports a full head of hair and is wearing a T-shirt and a nappy in the video, which is thought to have been recorded in America where Meghan and Harry are observing the Covid-19 lockdown.

The couple have made Los Angeles their home and they and other residents of California have been living under a “stay-at-home” order made by the state’s governor, Gavin Newsom.

America is where they plan to bring up their son after walking away from the royal family in order to become financially independent, after their hopes of earning money while still supporting the Queen were ruled out.

In the video, Meghan reads the story to her boisterous son who grabs at the pages and at one point appears on the verge of tears before breaking into a smile.

During the footage, his mother gives him a kiss on the cheek and lovingly calls him “Arch” as Harry, who is acting as cameraman, can be heard making approving noises in the background.

In a hilarious moment, the one-year-old reaches for something out of sight and picks up a book and the duchess says “let’s finish this book first, then we’ll have that book”.

But he then drops it on the floor and when Meghan tucks it down the side of the chair out of sight he reaches for it again and makes his father laugh by throwing it to the ground.

At the end of the reading, Meghan cuddles her son and says “good job” while Harry, still behind the camera, whoops and says “bravo”.

Archie has experienced an eventful 12 months since he was born at London’s Portland Hospital – first living in a cottage in the grounds of Windsor Castle, then an exclusive home on Vancouver Island in Canada, and now in the sprawling metropolis known as the City of Angels.

A few days after his birth, his parents proudly showed him to the world, before the Queen and Duke of Edinburgh saw the infant for the first time.