A few weeks ago I watched ‘Angel Face’, a black-and-white film from 1953, starring Robert Mitchum and Jean Simmons. At a couple of points in the film chess features. A game is played between a father - the actor is Herbert Marshall - and his daughter (Simmons), the father losing. The fact that there was a chess scene came as a complete surprise to me, as did the film’s ending! The film was shot on location in Beverly Hills. I don’t know if a chess expert was brought in, but if so, I can be pretty sure who the studio would have wanted. Herman Steiner, Hungarian by birth but whose parents had emigrated to the US, and who in 1948 was US chess champion, was the natural person to ask. His address was North Formosa Avenue, West Hollywood.

In August 1932 a chess tournament whose biggest scoop was the participation of World Champion Alexander Alekhine took place at the Maryland Hotel, Pasadena. Arriving for this event from New York was to prove a turning point for 27-year-old Herman Steiner, who, after the tournament, decided to stay on the West coast and make his home there. By the following year he was chess editor for the Los Angeles Times. Established as one of the country’s top players, Steiner had represented the USA at the chess Olympiads of Hamburg (1930) and Prague (1931). At the Hastings Premier Reserves tournament (1929) he had won first prize. With his re-location to California Herman Steiner began to forge a path as promoter of the game. He also started to become known in the world of movies and Hollywood.

It is easy to find photographs of Steiner with famous actors of his day. Humphrey Bogart, Lauren Bacall, Gary Cooper, Clark Gable, Spencer Tracy, Lana Turner...often we see the stars playing chess, with Herman Steiner standing behind, pointing to the board, as if explaining something. I also found an image from 1941 of Steiner with Herbert Marshall (‘Angel Face’) and Shirley Temple. This was taken on the set of the film ‘Kathleen’ during a break in shooting.

Steiner had founded a chess club which he later merged with another in Hollywood, to form the Hollywood Chess Group. In 1941 he helped raise funds for the British War Relief Association, giving a huge simultaneous exhibition over a hundred boards. Some of his pals agreed to help out: actors Charles Boyer, Ronald Colman, John Garfield and Basil Rathbone were all keen on chess. Other names come up too, perhaps less well-known today: Lilli Palmer, John Payne, Zachary Scott, Roseanne Murray. For the 1947 film ‘Cass Timberlane’ (based on Nobel laureate Sinclair Lewis’s novel of the same name) Steiner was called in to coach the actors in chess.

In January, 1946 Herman Steiner travelled to London, where he took part in the ‘Victory’ chess congress, celebrating the end of the war. This event was sponsored by a newspaper, the ‘Sunday Chronicle.’ The venue was grand enough: the Memorial Hall on Farringdon Street. However, as Steiner later described it for an American chess magazine, “We played in a large room...the ventilation was magnificent, but there was no fuel for heating! To keep warm, each player bundled up in his coat, hat, scarf and gloves!” Photographs confirm these Arctic sartorial arrangements. With 24 entries two groups were made of approximate equal strength. The A-group was won by Herman Steiner.

A year after moving West, Steiner married Selma Siegelman, a concert pianist. Their union produced two sons. From this same year (1933) a publicity photograph shows Steiner playing a game with former World Champion José Capablanca. Watching them is the famous film director and producer Cecil B. DeMille. A display of “living chess” was staged, DeMille taking the role of referee.

Although he was clearly at home in California, Herman Steiner continued to travel to chess events overseas. In the 1950s we see him participating in many international tournaments, such as in Venice (1950), Madrid (1951), Havana (1952), and Mar del Plata (1953). Among a highly regarded field at a World Championship qualifying event in Stockholm, 1952, Steiner scored a respectable 50%. At the Dubrovnik Olympiad, 1950, he both captained and played for the US team. This was the year that he was awarded the title of International Master.

Herman Steiner put strenuous efforts into organising his own chess events. The first Pan-American Open (1945) was his idea. The singer and actress Carmen Miranda drew the pairing numbers at the opening ceremony, while another actress, Linda Darnell, presented prizes. Marlene Dietrich was among those who came to watch. In 1952 Steiner succeeded in finding support for a Hollywood International tournament. Other projects were directed at helping young players improve. The first California Women’s Championship (1954) was another Steiner initiative.

In a radio match in September 1945 played between the Soviet Union and the USA, Herman Steiner was the only American player to score a positive result from his two games. The crushing Soviet victory was an ominous sign of their new dominance.

In November 1955 Herman Steiner entered the California State Championship, a tournament he had won in 1953 and 1954. Held in Los Angeles, this 22nd edition was very much a local fixture for him. Following his fifth-round game - a draw - Steiner, feeling unwell, asked to postpone his next game. That evening a doctor was called to his house. It was while he was there that Steiner, only 50, suffered a massive heart attack and died. The news must have come as a dreadful shock. Not surprisingly the remainder of the tournament was cancelled.

In his book ‘The World’s Great Chess Games’ Reuben Fine describes Steiner as “one of the most popular and colourful figures in American chess.” Others who knew him speak of his “contagious laughter and infectious good humor”, and “exuberant optimism”, while elsewhere it is written that “Steiner did as much as any man (and more than most) to make chess popular and attractive to the public.” His pupil and friend Jacqueline Piatigorsky, who took over the management of the Hollywood Chess Group (re-named the Herman Steiner Chess Club) wrote that “Herman Steiner’s immense love for the game spread a spark which brought chess to life in California.” It was, she said, “regardless of appreciation or recognition” that he taught, organised, and helped others. Securing funding for chess being not the least of his talents, Steiner “gave without reserve of his dynamic personality, spreading warmth, hope, enthusiasm and new ideas.”

Today’s puzzle shows a game of Steiner’s from the London 1946 tournament. He has Black, and it’s his move. What should he play? (The answer is below.) Steiner’s distinguished opponent, Savielly Tartakower, had fled France in 1940 after the German invasion. Finding safety in England “via Oran and a British battleship”, Tartakower joined de Gaulle’s Free French forces in London and adopted an alias: during the war years he was known as Lieutenant Georges Cartier. 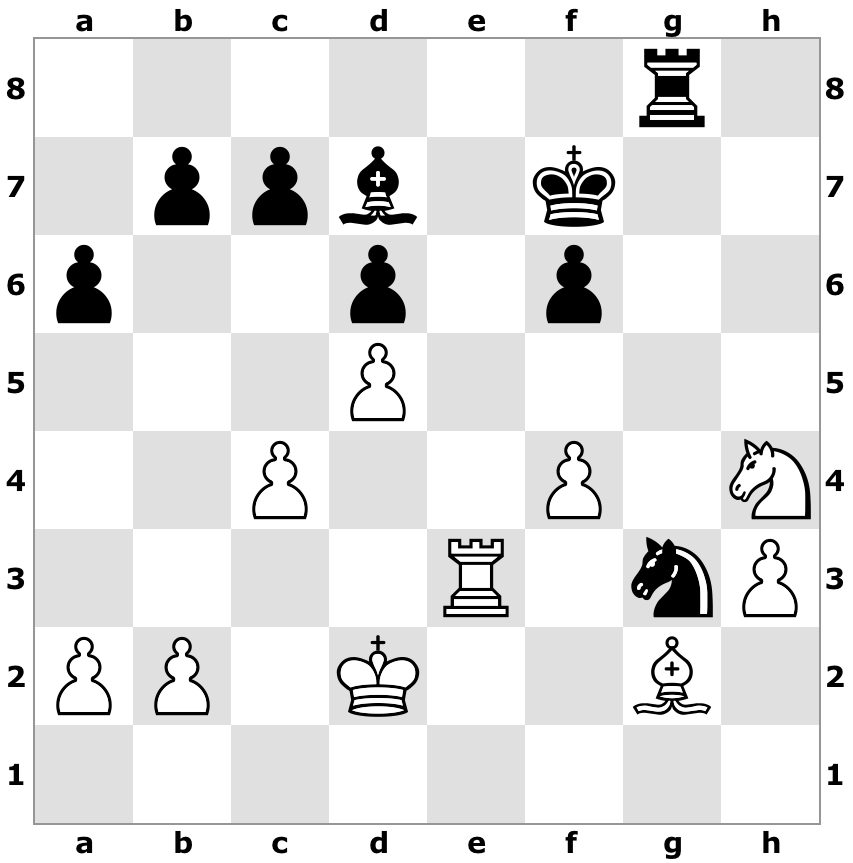