Hoard of silver coins to be sold at auction

A builder and metal detectorist who unearthed a hoard of 99 silver Anglo-Saxon pennies in a farmer's field has displayed the coins in London before they are offered for sale next week.

Don Crawley, from Bucklesham near Ipswich, made his discovery at the site of a forgotten Saxon church in Suffolk in 2017.

Auctioneers Dix Noonan Webb said the landowner did not want to reveal further details of the location of the find. 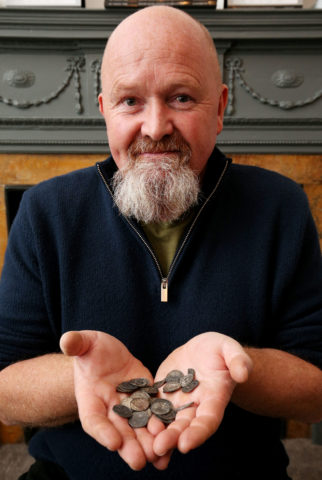 Mr Crawley, who had not visited the site before, also found the remains of human bones.

The coins were examined at the British Museum and experts said they dated back to the reign of King Ethelred II, known as Ethelred the Unready, who ruled England from 978 to 1016.

Auctioneers say the coins may have been buried by a pilgrim around 999 as penitence, due to worries about the "impending apocalypse of the Millennium".

The British Museum considered buying the coins but decided to disclaim them, the auctioneers said.

The hoard will be sold at auction in Mayfair during a two-day coins, tokens and historical medals auction on December 4 and December 5.

Proceeds will be split between finder Mr Crawley and the farmer on a 50/50 basis, the auctioneers said.

Viewing will start on Monday December 2.