How cycling and walking can aid Gibraltarians environmentally and physically

Bridging World Earth Day on April 22 and World Ocean’s Day on June 8 the Chronicle aims to run a series of articles that hope to help address the various ways people can ‘Restore Our Earth’, this week its sustainable means of transport. Chronicle reporter Eyleen Gomez spoke to Ann-Gabrielle Garner from the Loreto Convent school about children walking on ‘Traffic Free Tuesday’ day, Melissa Bosano from Sustainable Gibraltar on transport, Twitter handle @GibCyclist and Stuart Hedley from Ebike Gibraltar on getting around the Rock on two wheels.

Cycling and walking, instead of driving can not only help the environment, but also have a positive impact on a persons wellbeing.

In Gibraltar, groups such as Sustainable Gibraltar and Loreto Convent School are spreading awareness and holding initiatives to curb the unnecessary use of vehicles daily.

Public Health Gibraltar advises the public to walk daily instead of using a car.

“For most people, the easiest way to increase physical activity is to make it part of everyday life, like using the stairs instead of the lifts at work or walking instead of using the car to get around,” states the advice on the Public Health website.

Physical activities and exercise gives the benefit of preventing various illnesses such as diabetes, osteoporosis, stress and depression. With the suggestion that a child under five should be active for most of the day and people between the ages of five and 18 for at 60minutes a day or adults for 150minutes a week, then walking, running or cycling to work, school or where you need to go instead of taking the car is clearly an easy way to reach the recommended target. 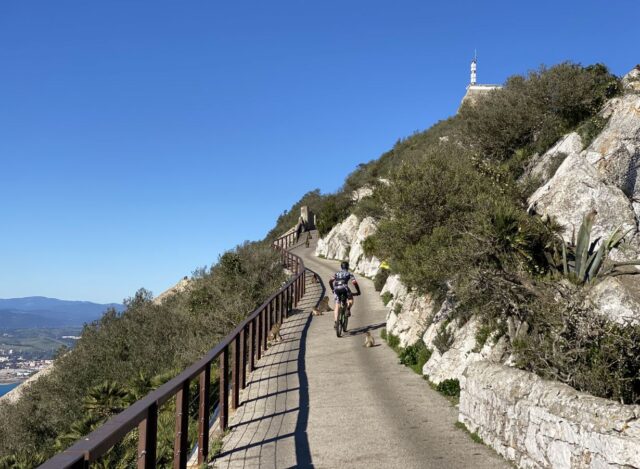 Cycling in Gibraltar
Twitter page @Gibcyclist believes that not only would more cycling and more cyclists in Gibraltar lower diabetes, heart disease, improve lung function as assist in weight loss but that: “This in turn would be passed on to savings within the GHA due to having a fitter and more active population.”

“From an environmental point it would lower air pollution as was seen last year when we had less cars on the road. The difference is noticeable. Cleaner air equals less impact on lung disease. Cleaner air helps both our natural world and in particular us.”

Given the size of Gibraltar they believe that it is an easy and quick form of commuting.

“With the advent of E Bikes cycling is possible to virtually all age groups and abilities. Hills are made easy with E Bikes,” they said.

“A cargo bike can be used if commuting with children on the school run, Normally faster than by car.”

“However from a safety point, more needs to be done to protect all vulnerable road users. Lower speed limits, advance stop lanes, cycle lanes, minimum overtaking distance. Gibraltar lacks in all of these and more.”

“Virtually all modern advanced countries have these and are embracing cycle as a help to ward climate change.”

When asked if they had the powers and or finances to do something what would they like to do. They replied, implement exactly what the GSLP set out in their manifesto.

“So far none have been delivered. All advanced countries in the EU, UK, USA etc have taken the last year to bring in cycle friendly policies,” they said.

“We had a cycle training scheme, we no longer have this.”

They were then questioned on how realistic they thought it was for the Government to do this?

“They promised £10 per person to be spent on cycling.”

“Please read their manifesto for all their cycling promises.”

Stuart Hedley from Ebike Gibraltar believes that to encourage the use of more sustainable modes of transport it requires a two pronged approach.

“Firstly it is imperative that measures which increase safety and convenience for sustainable modes are introduced, i.e. infrastructural changes such as dedicated cycle lanes and relief cycle areas where possible, cycle stencils and share the road signage where road width is limited,” he said.

“Secondly, non-essential polluting and congestion causing vehicle journeys need to be made as inconvenient as possible.”

He thinks this can be achieved by implementing parking restrictions, congestion charges, redirection of traffic flows, and again, reduced speed limits.

“We are passed the stage of appealing to people's understanding of the negative impact their transport choices make on the environment, whether it's degradation of air quality, increase in noise levels or making roads dangerous through speeding and reckless driving,” he said.

“New habits are formed and encouraged when old habits, such as jumping in a car to make a five minute journey, no longer offer a cost or time effective solution.”

Mr Hedley has ran a number of cycle runs in Gibraltar to raise awareness to cycling on the Rock and while he deals with electric bikes, traditional bike users have always been welcomed and are encouraged to take part. However, he is aware that “new technologies, such as the electric bicycle, can provide the cost and time savings which are no longer provided by the traditional motorised forms of transport.”

“Although a quality eBike can be more expensive than a regular bicycle, the increased benefits are significant.”

“Hills are flattened and headwinds become a breeze; commute in a suit. When it is realised that the latest generation of eBikes are more than capable of replacing the motorbike or the second car that is perhaps only used for a weekly shop, then I am confident that they will become ubiquitous.”

“More bikes less cars. An outcome that all road users, and indeed the whole community, can now look forward to,” he added. 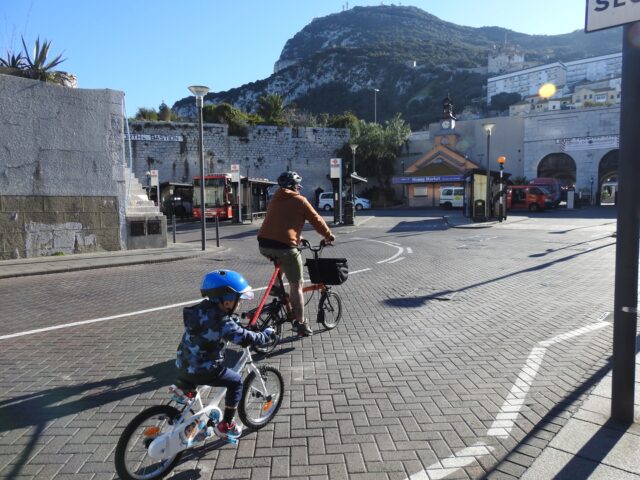 “It is all about the children wanting to show the rest of Gibraltar that it is a small enough place that you can walk to school and you don’t actually need to use your car,” she said.

“They are very aware of the noise pollution and the pollution in the air and how it is affecting their lungs and they want to show everybody this and they would love everyone to join them and dump the cars basically and use either public transport or walk.”

Daily there are seven or eight buses that are waiting at the frontier to take students to the school on Europa Road. However, on a Tuesday some like to take the opportunity to walk the approximately 4km to school meeting up with other students along the way, taking in the runway, Main Street and the beauty of Gibraltar’s Botanic Gardens on the way. 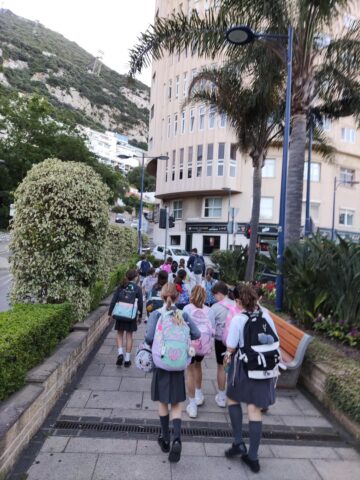 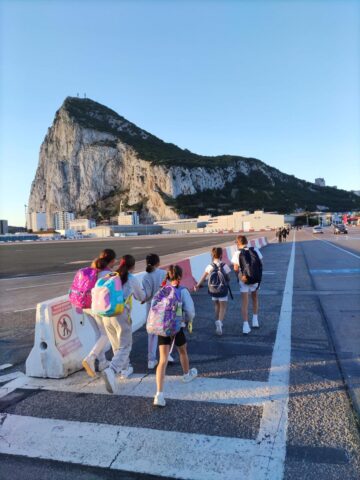 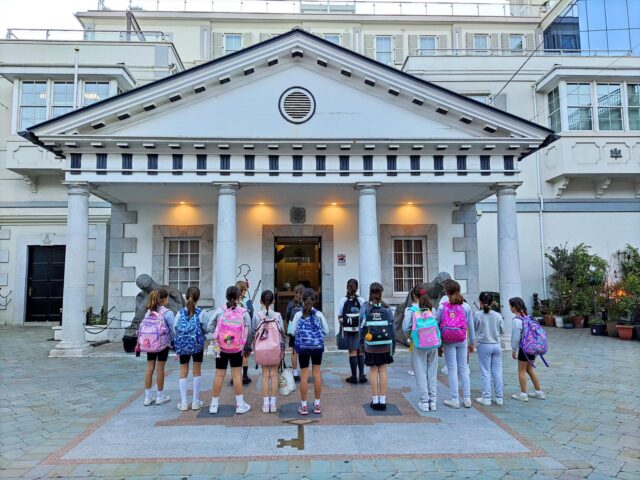 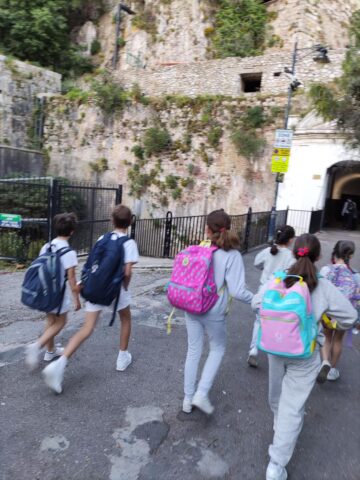 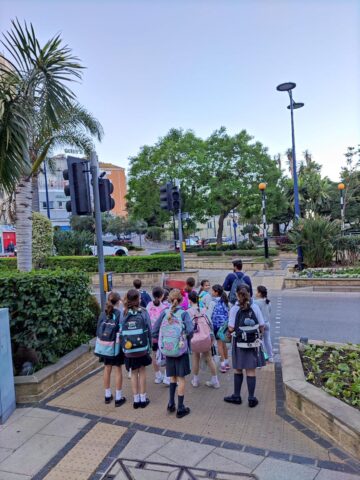 A lot of children who walk on the Tuesday will also do it with their parents or guardians on other days but on the Tuesday when they do it as a group they have more fun, get to chat with their friends on the way and even stop for five minutes if time permits to enjoy the Alameda Gardens.

“The ones who do it [Traffic Free Tuesday] love it, they are buzzing when they get here,” said Ms Garnier. The school is up a long steep hill but that does not deter the students or the teacher Maria Teresa Mir who walks with them.

She also noted that in a group at school this week they were talking about the Clean Air act that was introduced by Winston Churchill and that led to a discussion on the first lockdown that happened in March 2020.

“One person said, ‘he loved the first lockdown because he is quite asthmatic and he noticed in the first lockdown the air was so much nicer’,” she said. She noted that it was not just the dust pollution from cars and other vehicles but also the lack of noise pollution during that time. She gave the example of being able to hear birds throughout the day and not just in the morning. The lockdown also meant there was less traffic in the sea she said and as a result more dolphins were seen in the area.

“The aim would be if anyone listened then we encourage everyone to join in and ditch the car so we can all benefit and join in in enjoying cleaner air,” she said.

“There has been a definite shift in people’s awareness, and even though the number of people traveling more sustainably is not high, there has been a move towards alternative modes of transport,” she said.

Some aspect of this could relate to how potential users of sustainable methods of transport view the roads.

“People who would rather cycle to work or use a scooter find the roads in Gibraltar dangerous due to the volume of cars on the road,” she said.

“A system where cars and alternative options could share the roads would be a step in the right direction. This is itself may go some way towards encouraging more people to avoid the use of the car,” she added.

Gibraltar has a free bus service, aside from the bus to and from the frontier, and it is clearly used a lot by residents and cross frontier workers. In addition, there is currently a debate about night buses with some members of the public asking that they would be put on every night of the week.

However, Ms Bosano believes that if there was a wider range of routes and more frequent buses it would enable more people to choose public transport over private cars.

By providing more choices, and choices that are also environmentally friendly, to people who cannot walk, run or cycle to and from their destination it is thought that more people would avail of these services.