In a gallery in Casemates, a powerful message on Ukraine

Street artist Diego Hernán Rondán [pictured centre] who inspired the exhibition when he sabotaged his own mural of the Battle of Trafalgar with an anti-war message that stated: “Art has the power to inspire. Now is not a time to paint war.” On the right is organiser Gail Francis-Tiron. Pic by Johnny Bugeja

The ‘Artists for Peace’ exhibition was launched on Monday night at the Gustavo Bacarisas Gallery by the Minister for Culture, Dr John Cortes.

Some 140 works of art have been donated by local artists for auction in a bid to raise funds for Ukrainians displaced by war. 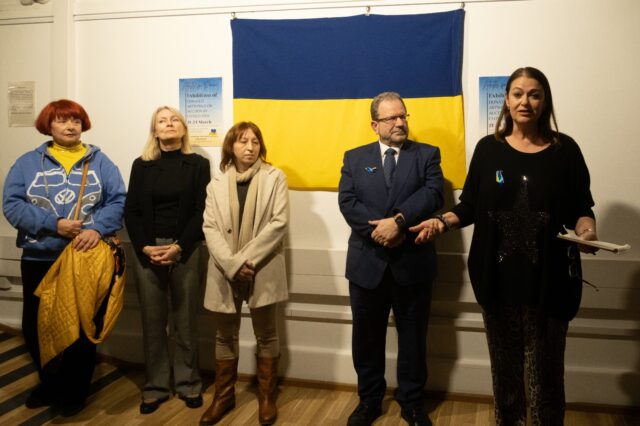 Among those present at the launch were two Ukrainian women, Nadiya Miller and Oksana Antosha, and Russian Elena Rodionova, all of whom spoke at the event.

Among some of the paintings adorning the walls of the gallery are paintings signalling Gibraltar’s support for Ukraine, including paintings in the two colours of the Ukrainian flag, blue and yellow.

Artists included Christiane Fagan, who submitted one painting, ceramic artist Ermelinda Duarte, who donated two pieces of her pottery, and a newcomer to the art scene, Belinda Origo, whose paintings were exhibited alongside those of established artists like Chris Anne Ullger and her husband, Karl. 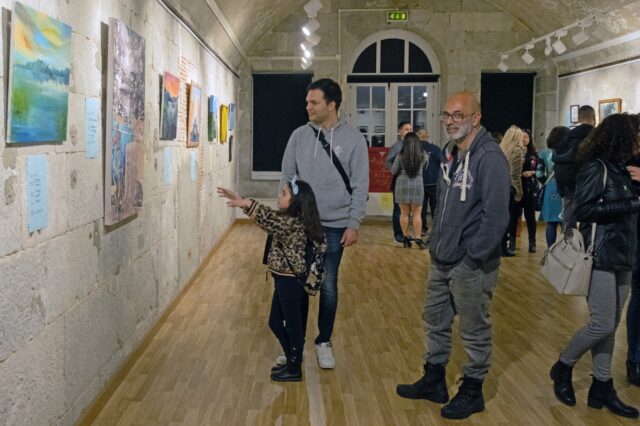 Another artist, the Chronicle’s sports reporter Stephen Ignacio, donated 24 works from a collection he had been creating for months with the view to holding his own exhibition.

Also on display were works by Gail Francis-Tiron, the person behind the fundraising exhibition who came up with the idea while wondering what she could do to help people displaced by the conflict in Ukraine.

She was inspired by street artist Diego Hernán Rondán, who sabotaged his own mural of the Battle of Trafalgar with an anti-war message that stated: “Art has the power to inspire. Now is not a time to paint war.” 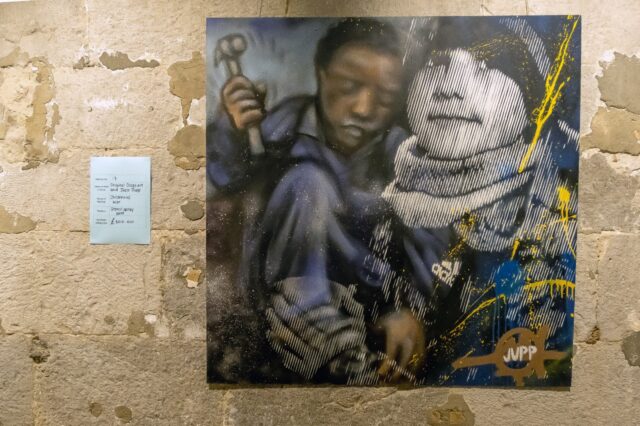 Mr Hernán was also present at the launch.

“What started off as an idea two weeks ago has turned into something fantastic and, hopefully, we will be able to raise money for Ukrainians in their hour of need,” Ms Francis-Tiron told those attending the launch of the exhibition. 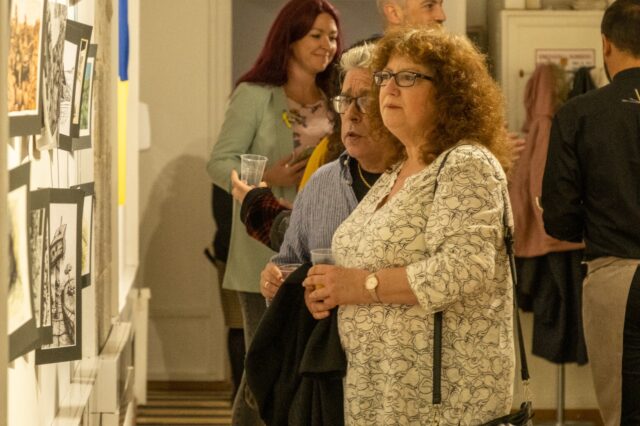 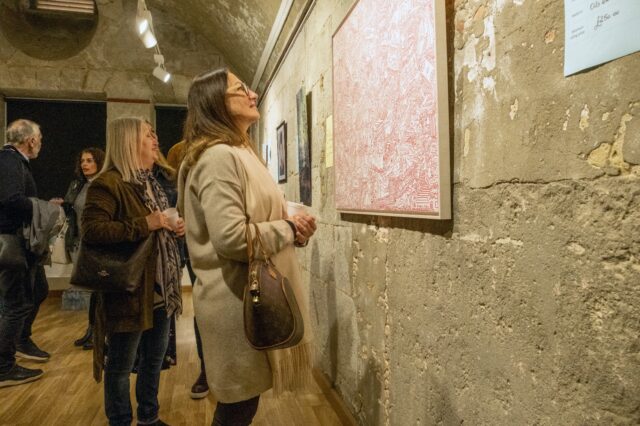 Unwilling to take full credit for it, she said she only had an idea and that it would have not been possible had it not been for the contributing artists, but also the many people who helped organise and advertise the event, rallying together in a short space of time to make it happen.

“I think, like everybody here, we felt helpless and wanted to do something. But, what can we do? We were all just talking about it. So I thought what can we do, especially as a community like Gibraltar that always rallies around and mucks in?” she said.

“Then I saw an artist that is displaying a piece of work here who sabotaged his mural by Trafalgar Cemetery who said ‘I don’t want to paint war, I want to paint peace, I am going to sell paintings for peace’, and that is when I thought, that is it, I am going to arrange an exhibition.”

She called on everyone to be generous with their bids and to think of the Ukrainian people as family.

Dr Cortes praised Ms Francis-Tiron's ability to pull the event together in such a short time, noting too that the support she received spoke volumes for the artistic community of Gibraltar.

“What can I say about what is happening in Ukraine? You have all seen it and can feel it much more closely,” he said, turning to Ms Miller, Ms Rodionova and Ms Antosha.

“What is happening there and what we are seeing in the news is something I thought I would never see in my lifetime.”

“I grew up thinking that this was something in the past.”

“When I think that the Second World War was only 15 years before I was born, I have always looked at it as something getting further and further into the past.”

“And a war like this in Europe, even though there have been similar ones in other parts of the world, is something that none of us want.”

“Those of us who believe are praying a lot. And those who don’t are hoping and, probably, even they are praying, just in case.”

Ms Miller, Ms Rodionova and Ms Antosha each took a moment to thank everyone for their support, not just with respect to the exhibition but for every effort Gibraltar has made since the war broke out.

First to speak was Ms Miller, whose emotive speech resulted in a rapturous applause when she said: “Having walls and pictures on them is a luxury for more than 10 million Ukrainian people who lost their homes for now, just in 26 days of war.”

“In Mariupol, a Ukrainian city besieged by the Russian army, there are almost no walls left. Even to hide behind.”

“Such an ordinary thing as a painting on a wall is a privilege in our days, please treasure it as a symbol of freedom and peace,” she added.

Ms Rodionova told the guests that the Help Ukraine Group in Gibraltar brought together different nationalities, Ukrainian, Russian, Belarusian, Polish, Croatian, and that they have all been joined together by the idea that they need to do something to fight the Putin regime.

“Throughout these several weeks I have met a load of amazing people who helped me overcome the shock of the first days of war. They told me you are not alone, we will support you, we will go through this together,” she said.

“And with their help we managed to collect an enormous amount of donations. Part of them went straight to Ukraine and part of them [are] reserved for the needs of the refugees.”

“The fact that organisers of this exhibition managed to gather so many beautiful art pieces in such a short period of time shows and proves one thing, that Gibraltar is a unique place.”

“It is a place where so many generous hearts live and knowing that we are supported and seeing this support, feeling it, makes us truly believe that together we can help Ukraine to win this war against Putin.” 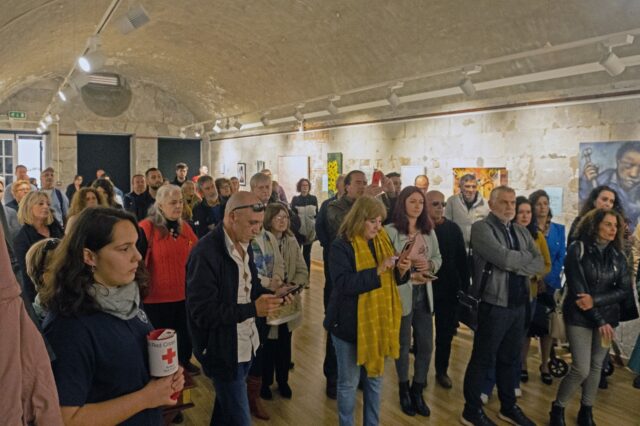 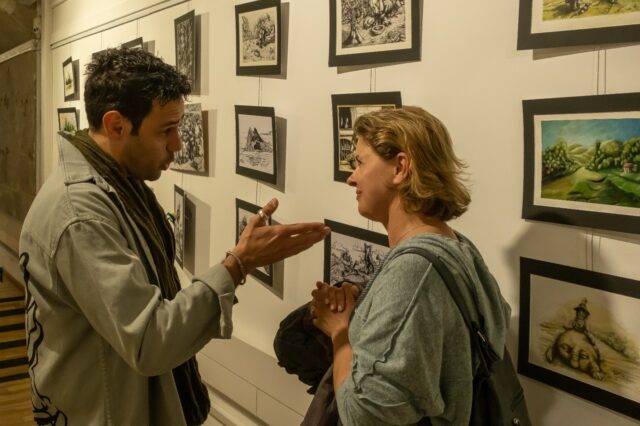 Ms Antosha thanked everyone for their support and kindness but wanted the bigger message to be that everyone’s thoughts be devoted to peace.

Because the notions of war and peace form when we are small babies, she said. Babies are taught the difference between right and wrong or to not take what is not theirs.

“We have to raise a peaceful population of the earth,” she said.

“In this war, we feel your help because Ukraine is small in comparison with Russia and with all the civilised communities standing up and rising against the aggression.”

“We have to ban nuclear weapons all around the world. We have to join our forces, our minds, our ability to love each other, to help each other.”

“Because then bad things won’t come from someone’s mind, but it is necessary for this to start from us.”

“And we can be as peaceful as the painter. I am so grateful. I am grateful for you people, that you are standing by my side and supporting me and my country. Thank you very much, thank you for everything.”

The last day of the exhibition is Thursday March 24 and it is open from 2pm to 6pm. All the artworks can be bought by submitting a closed bid, the highest bidders will be the new owners of their chosen piece, and these persons should know this by end of play on Friday.

All money raised will be given to the Red Cross, Gibraltar, for their Ukraine account.