The well-known Spanish journalist and author Arturo Pérez-Reverte was in Gibraltar on Tuesday to present his latest book, which is set in the Bay of Gibraltar and centred on the exploits of the so-called Italian human torpedoes who targeted British shipping here during the early years of World War II.

The novel recounts a fictional love affair between a librarian from La Linea and one of the Italian divers, but in doing so brings a different, human dimension to the well-documented exploits of the special unit of the Italian navy’s Decima Flotigglia MAS.

From their base in a scuttled merchant ship in Algeciras called the SS Olterra and from properties around the bay on the Spanish coastline, the Italian divers launched attacks sitting astride torpedo-shaped submersible 'chariots' to penetrate British underwater defences and mine ships anchored in Gibraltar.

They succeeded in damaging or sinking some 14 vessels over nearly three years in the early 1940s, but paid a heavy price too. Many of them died in the attempt.

The plot of the novel, called El Italiano, or The Italian, centres on the relationship between Teseo Lombardo, one of the Italian divers, and Elena Arbués, a woman from La Linea who lives in Puente Mayorga and finds him one morning injured on a beach as a ship burns in the bay.

As their relationship grows, she finds herself drawn closer to him and working for the Italians against the English.

Ranked against them is a police officer in Gibraltar, Harry Campello, who leads a special unit tasked with stopping the saboteurs.

For the author, the Italian divers are heroes, but perhaps not in the way one might imagine patriotic heroes.

He draws on literary references to explain how, in the diver, the well-read Elena sees the flawed heroes of Greek mythology, and how through that perception Teseo, a simple man doing a dangerous job, transcends the ugly reality of war to become a heroic figure.

The Mediterranean and the shared history and culture of its peoples infuse his text, Mr Pérez-Reverte says, and his leading character “is the type of man that some married women dream about while their husbands are asleep.”

The author was a war correspondent for 21 years - “everything I know about the human condition, I learnt there,” he says - and that experience has helped him create his characters.

“War lets you see mankind in a different way and everything that I’ve learnt in war helps me with my novels and my characters.”

“I work with what I have experienced, what I’ve read and what I imagine.”

“War is horrible, but when you go there and you’ve read widely beforehand, you see things in a different way and it teaches you a lot, both about what’s good and what’s bad.” 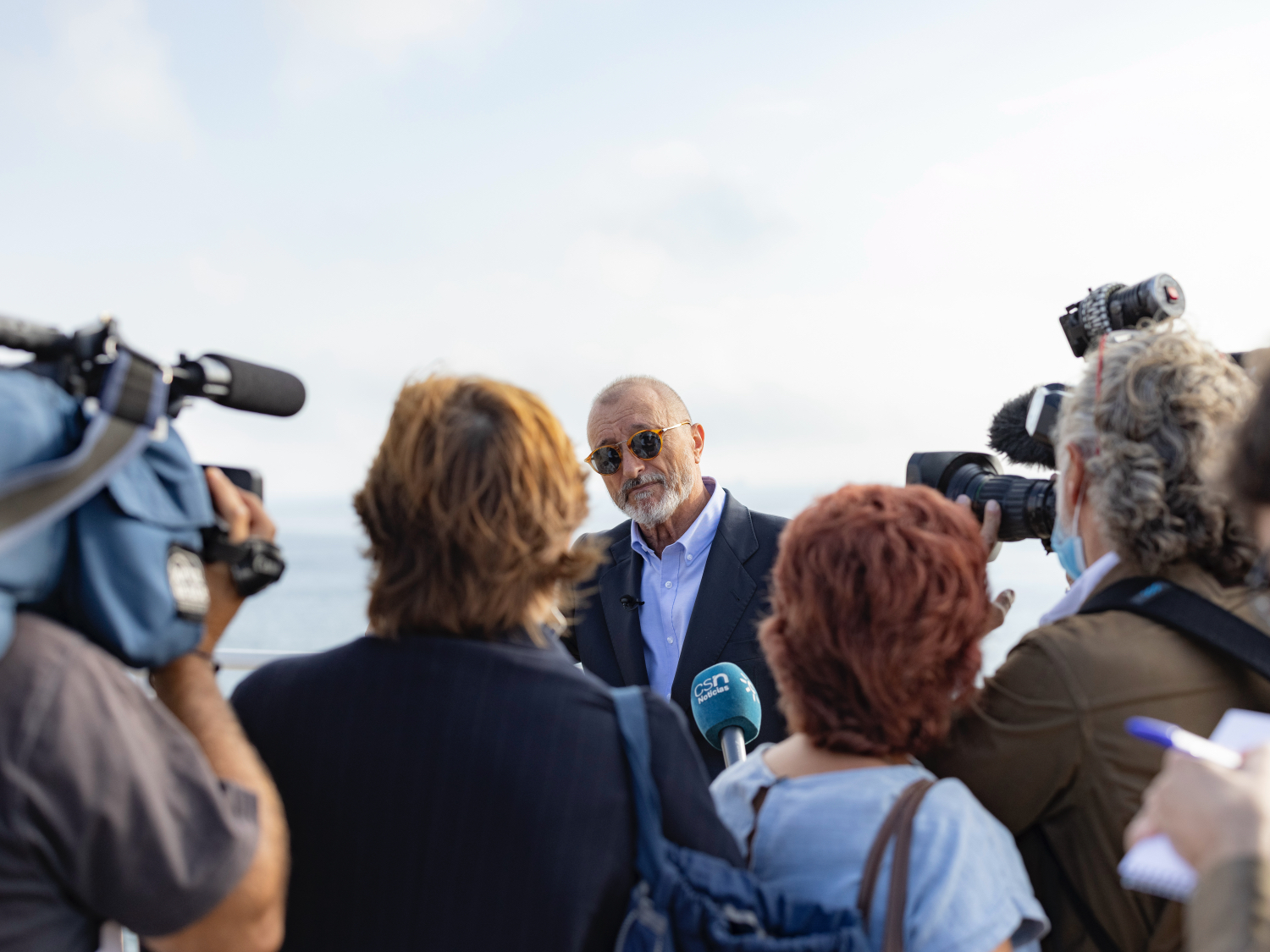 Mr Pérez-Reverte was speaking over lunch at the Rock Hotel after visiting numerous locations around the Rock with a group of Spanish journalists, part of the book launch arranged by his publisher.

But he is no stranger to the Rock, having first visited in 1972 as a working journalist and then several times after that to film documentary segments in the Strait of Gibraltar on issues including migration and smuggling.

Two of his earlier books – La Reina del Sur and La Carta Esférica – are set in part in and around the Strait of Gibraltar, and he confessed the Rock’s multi-layered history fascinated him.

“All of Europe’s history, you have it here,” he said.

“This is the world that I love because that’s where you find characters and rich material.”

Parts of the book are set in Gibraltar and draw on that experience.

There are nods in the novel to people he has met during the course of his career, including “my great friend and legendary character” Eddie Campello, the former editor of Vox newspaper after whom he named one of his central characters, the policeman, in the novel.

He recalls how Mr Campello had spoken with great respect about the Italian divers and had shown him an Italian dagger that belonged to one of them.

But above all, what draws him back to this region time again is the fact that it is a frontier, a place where Europe and Africa are within a stone’s throw of each other, where the Mediterranean meets the Atlantic, a place that is a rich melting pot of different cultures and peoples.

“Frontiers are fascinating places and all my novels are always based around them.”

As a youngster Mr Pérez-Reverte, 70, trained as a diver with the Spanish Navy and he first heard about the story of the Olterra and the Italian human torpedoes from his father, who debunked the common myth that Italians in the war were “pathetic cowards, ridiculous and so on”.

“Don’t be mistaken,” he says his father told him.

“The Italians were very courageous and did heroic things. And he told me the story of the 10th Flotilla and the Italian divers in Gibraltar.”

“And that stayed with me.”

Mr Perez Reverte said that over the years, he collected material on the subject until one day, “I saw the novel”.

“I’ve been a diver and from the outset, the sea is tough,” he said.

“But at night, it’s the horror of the dark.”

“What they did was so courageous, they deserved this novel.”