In New Orleans, a stark reminder of lives lost

In this week’s travel feature Eyleen Gomez takes a sombre look at the ‘Wall of Murder’ in New Orleans.

When you think of New Orleans, you think of a vibrant city with its infamous mardi gras parades, the home of jazz, jambalaya and of course its colonial architecture.

However, amongst a multitude of positive aspects about a city that is still rebuilding post Hurricane Katrina there is a sad profound list of people whose names appear on a wall by a church simply because they were murdered.
A number of panels make up this wall at St. Anna’s Episcopal Church, which is located in a neighbourhood called Treme on the edge of the French Quarter, which was started in 2007 and contains hundreds of names.

The first name to appear is that of Corey Hayes who was shot at the age of 28 on New Year’s Day 2007. So numerous are the murders only boards from 2007 to 2012 are on permanent display due to space restrictions.

There is then a board for the current year where the names are hand written in every week. But, despite the number of murders decreasing each year since 2007 there was still 119 names on the board for 2019. 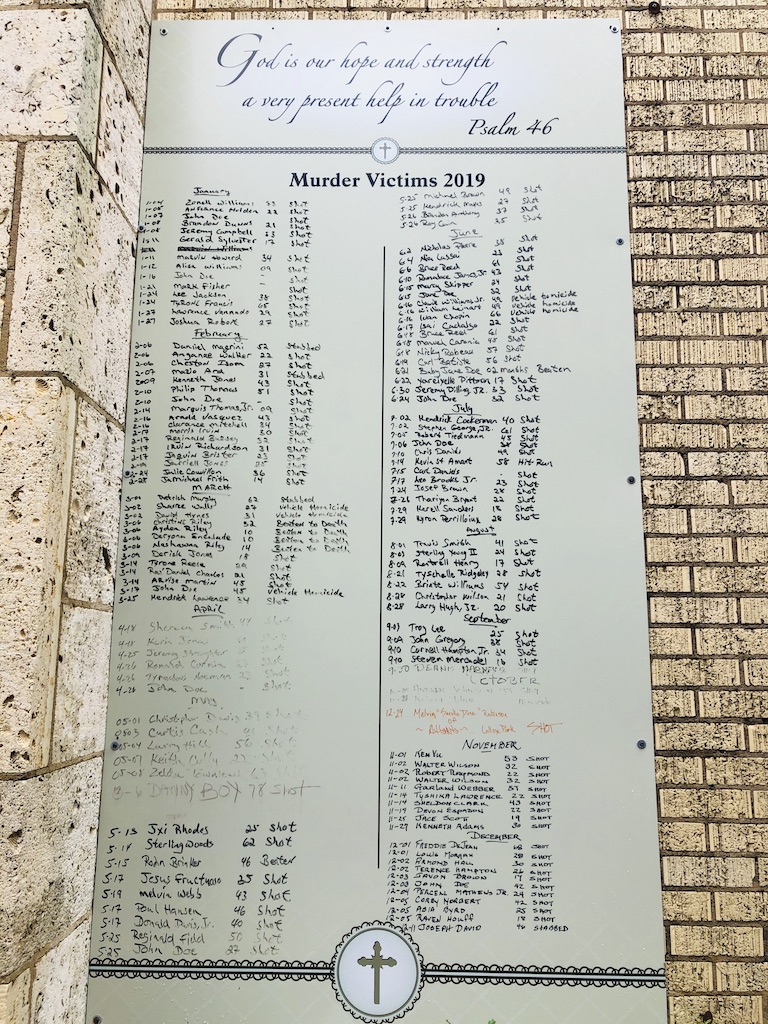 I visited in early 2020, a pre Covid time of life, where it would appear from statistics since released it changed from the least murderous year of 2019 since 2007 to numbers akin to when the first board was erected in 2007 with the murder of 202 residents.

The date of the murder, the victim’s name, age and how they died are listed. However, some remain nameless and the name John or Jane Doe appears. Also sadly so does the names Baby John Doe and Baby Jane Doe.

The first killing in 2019 was that of armed 33 year old Zonell Williams who was shot in an exchange of gunfire with police officers on January 4.

As you read through the list you come across horrific entries such as the one for Alisa Williams who at the age of nine was shot 12 days into the New Year in an accidently shooting reportingly by her 12 year old brother.

Seeing the name of a youngster is not uncommon and on March 6, 2019 ten year old cousins Ayden Riley and De’ryona Encalade were beaten to death by a hammer, Ayden’s 14 year old sister Nashawna Riley died in hospital later in the horrific attack that also took the life of her mother 32 year old Christine Riley.

However, an entry that is truly heartbreaking to read is dated June 21 where on the longest day of the year Baby Jane Doe was beaten to death at a mere two months old.

Being shot is the most common cause of death with a gunshot having claimed the lives of 107 New Orleans residents that year, next is vehicle homicide or hit and run where eight people were murdered, being beaten accounted for six deaths and being stabbed only accounting for four deaths that year.