“In some corner of a foreign field….”

With Remembrance Sunday just past, the Honorary Colonel of the Royal Gibraltar Regiment, Lt Col (Retd) Francis Brancato looks at the Gibraltarian soldiers who paid the ultimate price in service to their country.

November is the month of Remembrance – and it was only last week that we stood in silent remembrance of those that made the ultimate sacrifice to safeguard our values and freedom. It is especially poignant on Armistice Day as we commemorate those Gibraltarians that were killed in both World Wars. It has always struck me how little we know of these brave Gibraltarians – or of their long journey from Gibraltar to the trenches. Who were they? Where did they fight? And ultimately where did they fall?

In this first part, I will cover WW1 where more than 20 Gibraltarians lost their lives in the conflict (the figure is considerably larger if you count Gibraltar born UK soldiers). They fought in almost every major battle on land and also at sea – from Ypres to the Somme, Gallipoli, Salonika and the North Atlantic. 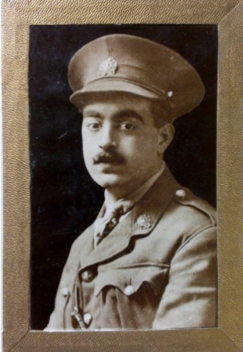 (photo courtesy of the Benzecry/Seruya families)
I will start with probably the best known of our WW1 heroes –, Royal Fusiliers (RF), the “hero of Bourlon Wood” - his memorial inside the Lobby of Parliament rightly takes pride of place at all our Armistice Day commemorations. Attached to 10th battalion of The London Regiment, Benzecry was killed in action (KIA) on 30 November 1917 while forming part of a rearguard that impeded elements of a German counter-attack during the Battle of Cambrai.

The rearguard's efforts were credited with averting the loss of the battalion by ensuring its withdrawal and subsequent reorganisation. Their conduct was lauded in the contemporary press and an account of the action in The Times read - “Of the heroism of the rearguard it is difficult to speak. Captain Stone and Lieutenant Benzecry, although ordered to withdraw to the main line, elected to remain with the rearguard. The rearguard was seen fighting with bayonet, bullet, and bomb to the last.

Lieutenant Benzecry was seen to be wounded in the head. He continued to fight until he was killed” Solomon received a Mention in Despatches (MiD) whilst his Company Commander, Captain Walter Stone was awarded a posthumous Victoria Cross. Lt Benzercry’s body was never recovered, and he is commemorated at the Cambrai Memorial, France.

2/Lt John Undery
2/Lt John Undery had enlisted in the Royal Fusiliers 1901 and was a Company Sergeant Major by the outbreak of the war. Commissioned in the field later that year, he was killed leading his men into action in October 1914. He is commemorated in the Menin Gate memorial, Ypres, Belgium. He was married and had two young sons. 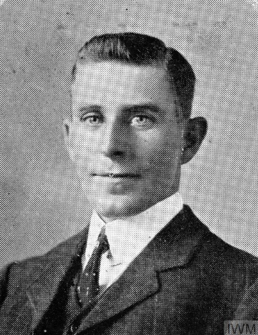 (Photo courtesy of the IWM collection) 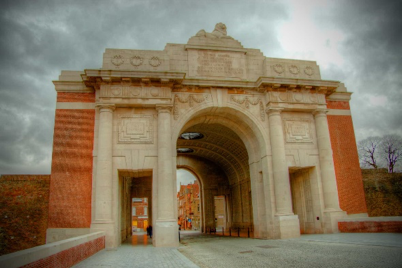 Lt Percy Baglietto Cottrell
When war broke out, Percy Baglietto Cottrell was in Athens at the time, (he was studying Classics at Oxford) he immediately returned home and tried to enlist as an ofﬁcer, but was rejected because of his poor eyesight. Undeterred, he enlisted as a private in the Royal Fusiliers but was later commissioned in the same unit. Deployed to Salonika as an Intelligence Officer and Greek Interpreter (he was born in Corfu where his father was the British consul), he undertook numerous special missions for which he was made a Chevalier of the Order of the Redeemer and awarded the Greek Military Cross by HM King Constantine.

On the 18th September 1918, he was hit in the side of the chest by a bullet during operations to the East of Lake Doiran, in the Salonika Front and died later of his wounds. He was posthumously awarded the MC. He lies buried at the Sarygol Military Cemetery in Greece. 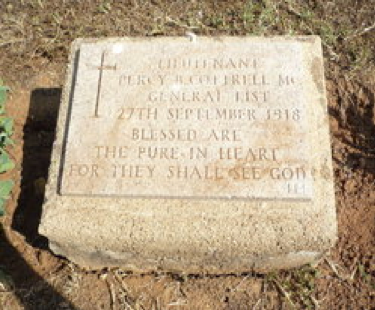 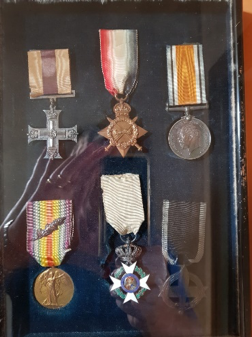 Sgt Michael Pitman
Sergeant Michael Pitman (of the family after which Pitmans Alley is named) was a seasoned veteran serving with the Royal Garrison Artillery (RGA). He was stationed in Gibraltar prior to the war with 55th Company RGA and later deployed to France. Sgt Pitman was KIA whilst serving with 89 Siege Battery during the 3rd Battle of Ypres and is buried at Trois Arbes cemetery, France. He left behind a widow, Doris (nee Rumbo), a son Robert and daughter Mercedes. 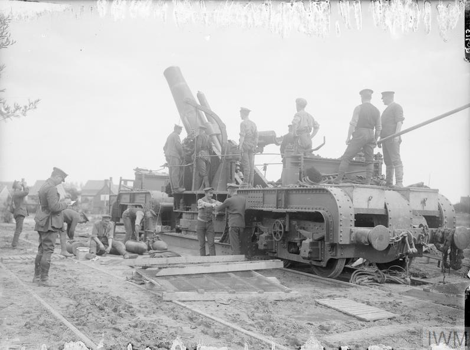 Cpl Albert Jones
Corporal Albert Jones, Lancashire Fusiliers (LF), the son of Henry and Louisa Jones of Lopez Ramp, was 23 when he landed in France on 20 Aug 1914 with the 2nd battalion LF as part of the first wave of the British Expeditionary Force (BEF). He fought at Battles of the Marne and Aisne and was killed in the trenches on 28 October 1914. He is commemorated at Ploegsteert Memorial, Ypres, Belgium. 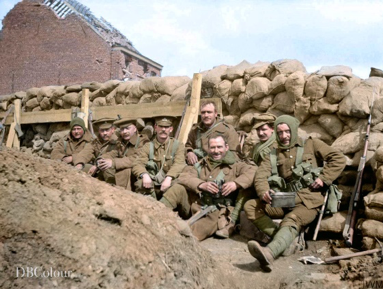 (2nd LFs in the trenches – photo courtesy of the IVM collection)

Ptes Leopoldo Bossano and Andrew Ryan
Swept up by the great surge in patriotic fervour and eagerness to demonstrate their loyalty to the Crown, a number of young Gibraltarians joined Kitchener’s “New Army”. Amongst them Pte Leopoldo Bossano (Sir Joe Bossano’s uncle) who enlisted at Bermondsey, London and was serving with the London Regiment when he was KIA in the trenches during the Battle of Fleurs Courcelette (part of The Somme offensive) on 19 September 1916 and is commemorated at the Thiepval Memorial, France. 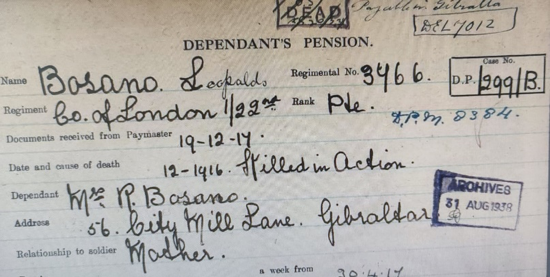 Also serving in the London Regiment, was Rifleman Andrew Ryan who had enlisted in the Queens Westminster Rifles, a prestigious Territorial Force unit part of The London Regiment. Ryan, who had previously been a police constable, was killed at the battle of Givenchy, just 9 days before Pte Bossano as part of the same Somme offensive and is also commemorated in the Thiepval Memorial. 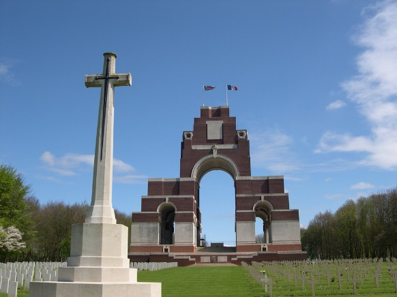 (Thiepval memorial, France)
Ryan left behind his widow Mary, who lived in 30 Town Range. Years later, one of his friends, Oscar Chichon, wrote a short poem in his honour which was published in the local Spanish language newspaper “El Anunciador” 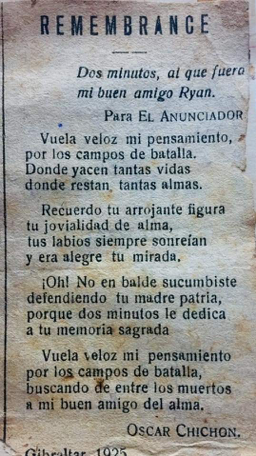 (photo courtesy of the Chichon family)

Ptes Francis Piri and Henry Reading
Pte Francis Piri was killed fighting in the trenches near Arras with the 2/4 RF in June 1917. Pte Henry Reading (Royal Northumberland Fusiliers) is also commemorated in the Arras Memorial having being KIA during the Battle of Messines a month earlier in May 1917. 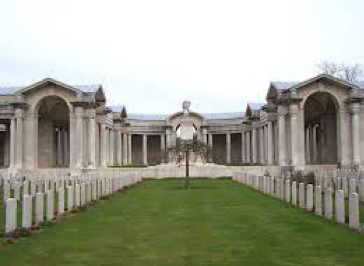 Capt Lionel Harrison
Lionel Harrison, was born in Gibraltar on 25 May 1895, son of Joseph and Harriet Harrison a well-established local merchant family. He studied law in England and then set up a practice in Derby. He was commissioned into 5th (Territorial Bn) of the Sherwood Foresters Regiment.

Mobilised and deployed as part of BEF in August 1914, he was wounded in action at Essarts in March 1917. Promoted to Captain, Lionel was killed on the 27th March 2018 whilst in temporary command of the 16th battalion who were holding the line near Proyart (Battle of Rosieres, Amiens). He is buried in Heath Cemetery, Harbonnieres. 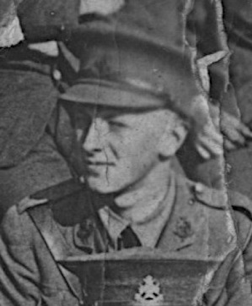 Pte Thomas Stewart and LCpl John Weston
Two of our fallen, lie very far away from The Rock - Pte Thomas Stewart (son of John and Emilia of 13 City Mill Lane) is buried in the Gaza War Cemetery in Eqypt having been KIA with the 5th battalion of The Royal Scots Fusiliers during the second Battle of Gaza in April 1917.

The other, LCpl John Weston (son of John Weston Lighthouse Keeper and Josefa) was killed during the evacuation phase of the Gallipoli Landings in December 1915 whilst serving with Y Company, 4th battalion Worcestershire Regiment. He is commemorated at Azmak Cemetery, near Suvla Bay, Turkey. 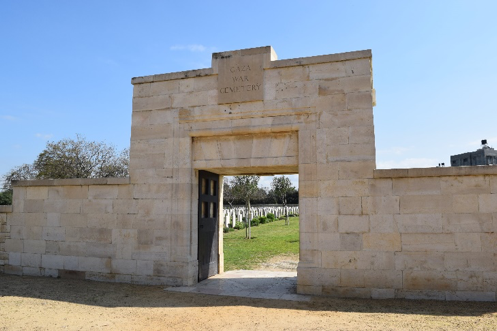 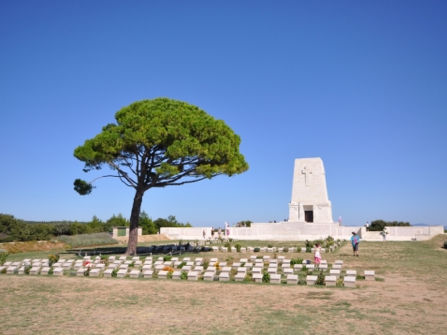 The War at sea

Even though most of fighting in WW1 was done on land, a number of Gibraltarians lost their lives at sea – both with the Royal and Merchant Navy. Chief Petty Officer Edward Burr lost his life when he was swept overboard at sea in November 1914. Interestingly Burr had been posted to Chile as an instructor to the Chilean Navy in 1912 (presumably because he spoke Spanish).

Leading Telegraphist Charles Amor (his father Charles was Prison Warden at HMP Moorish Castle) was KIA onboard HM Submarine E34 and is buried at Noordwijk cemetery in The Netherlands.

Assistant Steward Joseph Gustavino (son of John and Xienta Gustavino of Willis Road) was killed onboard SS Exford in July 1917. Able Seaman Edward Oliveri was killed when the cargo ship he was in, the SS Livonia, was torpedoed and sunk in the English Channel by a German U-boat on 14 July 1917. Only 3 days earlier, Francis Sarmiento (resident in 16 Church Street) serving as a Fireman onboard SS Calypso had also lost his life at sea. All three are commemorated at the Merchant Navy Tower Hill Memorial in London. 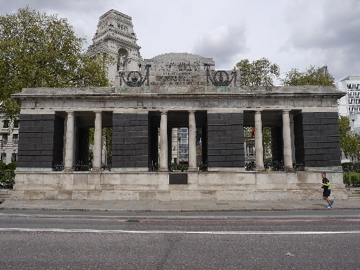 A number of Gibraltarians enlisted in the Dominion Forces as well as in the Unites States Army. Pte Alfred Ruggier was embarked on the training schooner HMS Conway prior to the war and later emigrated to Australia where he enlisted in the Australian Infantry Force (AIF).

He was deployed to France with the 31st battalion AIF when he was taken ill and sadly passed away. He is buried at Allonville cemetery, France. His father William was the Admiralty Clerk of Works in Gibraltar. Eugene Passano had emigrated to the US at the beginning of the century and lived in New York where he signed up with the 29 Infantry Regiment in 1913. Mobilised for war, Eugene was killed shortly after landing in France in late 1917, victim it appears of a tragic training accident.

As a Gibraltarian and a soldier, I am proud of our countrymen’s bravery and exploits. It is thanks to their sense of duty and sacrifice that we are able to enjoy the freedoms and values that we hold so dear today.
As I remember them, I cannot but recall the poem by Rupert Brooke ‘The Soldier’….

“If I should die, think only this of me:
That there’s some corner of a foreign field
That is for ever…. “ Gibraltar.

We Will Remember Them.