The Prince of Wales, the Queen, and King Charles III during the Accession Council at St James's Palace, London, where King Charles III is formally proclaimed monarch. Charles automatically became King on the death of his mother, but the Accession Council, attended by Privy Councillors, confirms his role. Photos by Jonathan Brady and Victoria Jones/PA

King Charles III paid tribute to the reign of the late Queen, “unequalled in its duration, its dedication and its devotion”, as he was formally declared the nation’s new monarch.

During a poignant and sombre meeting of the Accession Council, the King spoke movingly about his mother and the grief his family is experiencing, but said the “sympathy expressed by so many to my sister and brothers” had been the “greatest consolation”.

Watched by the Queen, the new Prince of Wales and more than 200 privy counsellors – including six former prime ministers – the King pledged himself to the task now before him and the “heavy responsibilities of Sovereignty”. 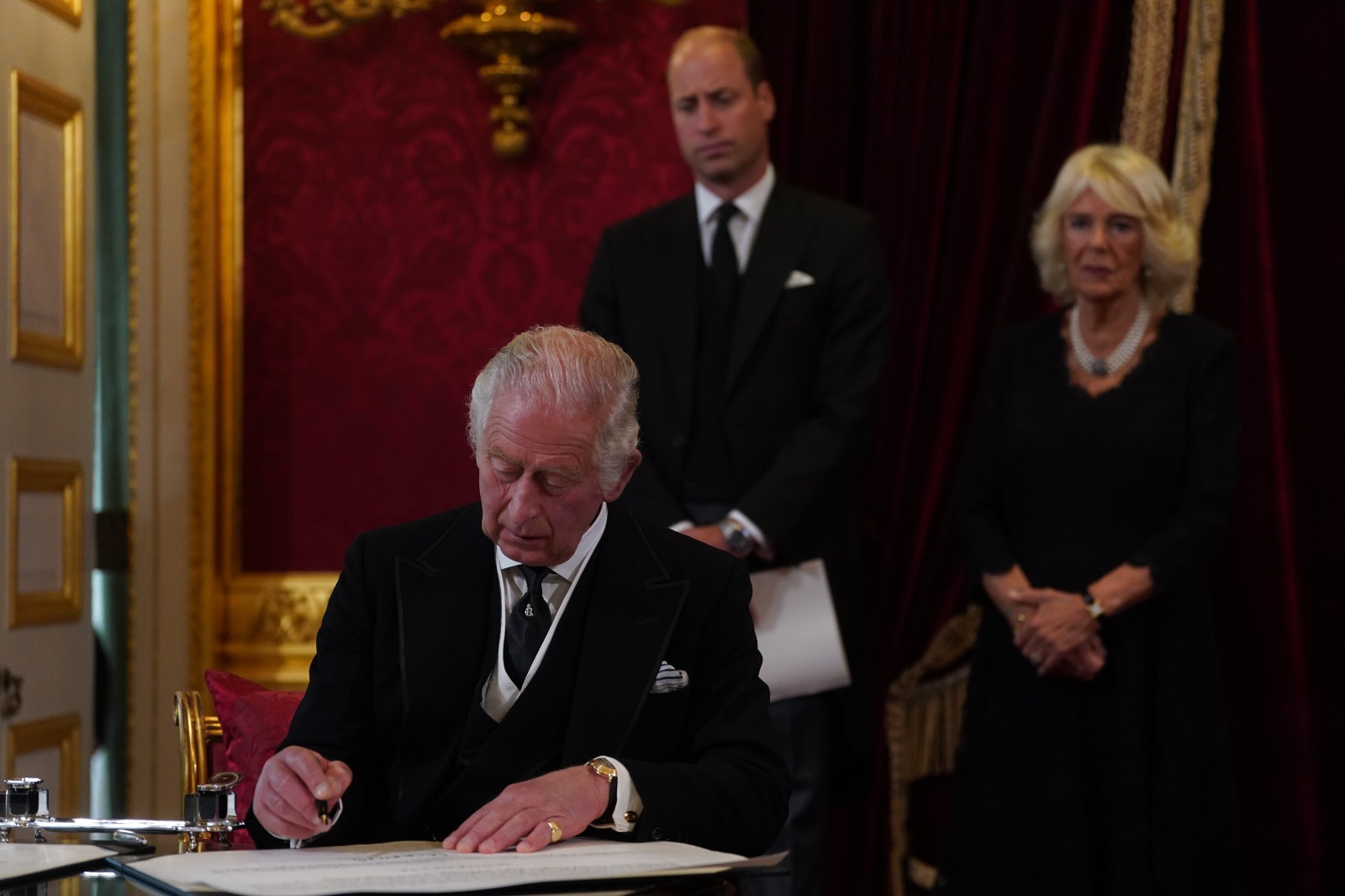 Charles began by discharging the “sorrowful duty” of announcing the death of his “beloved mother”, and told the council: “I know how deeply you, the entire nation – and I think I may say the whole world – sympathise with me in the irreparable loss we have all suffered.

“It is the greatest consolation to me to know of the sympathy expressed by so many to my sister and brothers and that such overwhelming affection and support should be extended to our whole family in our loss.”

Charles spoke of the late Queen’s “selfless service”, adding: “My mother’s reign was unequalled in its duration, its dedication and its devotion. Even as we grieve, we give thanks for this most faithful life.”

He went on to say: “I am deeply aware of this great inheritance and of the duties and heavy responsibilities of Sovereignty which have now passed to me. In taking up these responsibilities, I shall strive to follow the inspiring example I have been set in upholding constitutional Government and to seek the peace, harmony and prosperity of the peoples of these islands and of the Commonwealth Realms and Territories throughout the world.”

The King ended by saying: “And in carrying out the heavy task that has been laid upon me, and to which I now dedicate what remains to me of my life, I pray for the guidance and help of Almighty God.”

The historic event was broadcast for the first time, giving the world a first glimpse of an ancient ceremony dating back centuries and one of the first changes to convention instigated by the new King.

Following convention, Charles did not attend the first part of the ceremony when the clerk of the council Richard Tilbrook read the proclamation to the packed meeting that confirmed the new monarch. 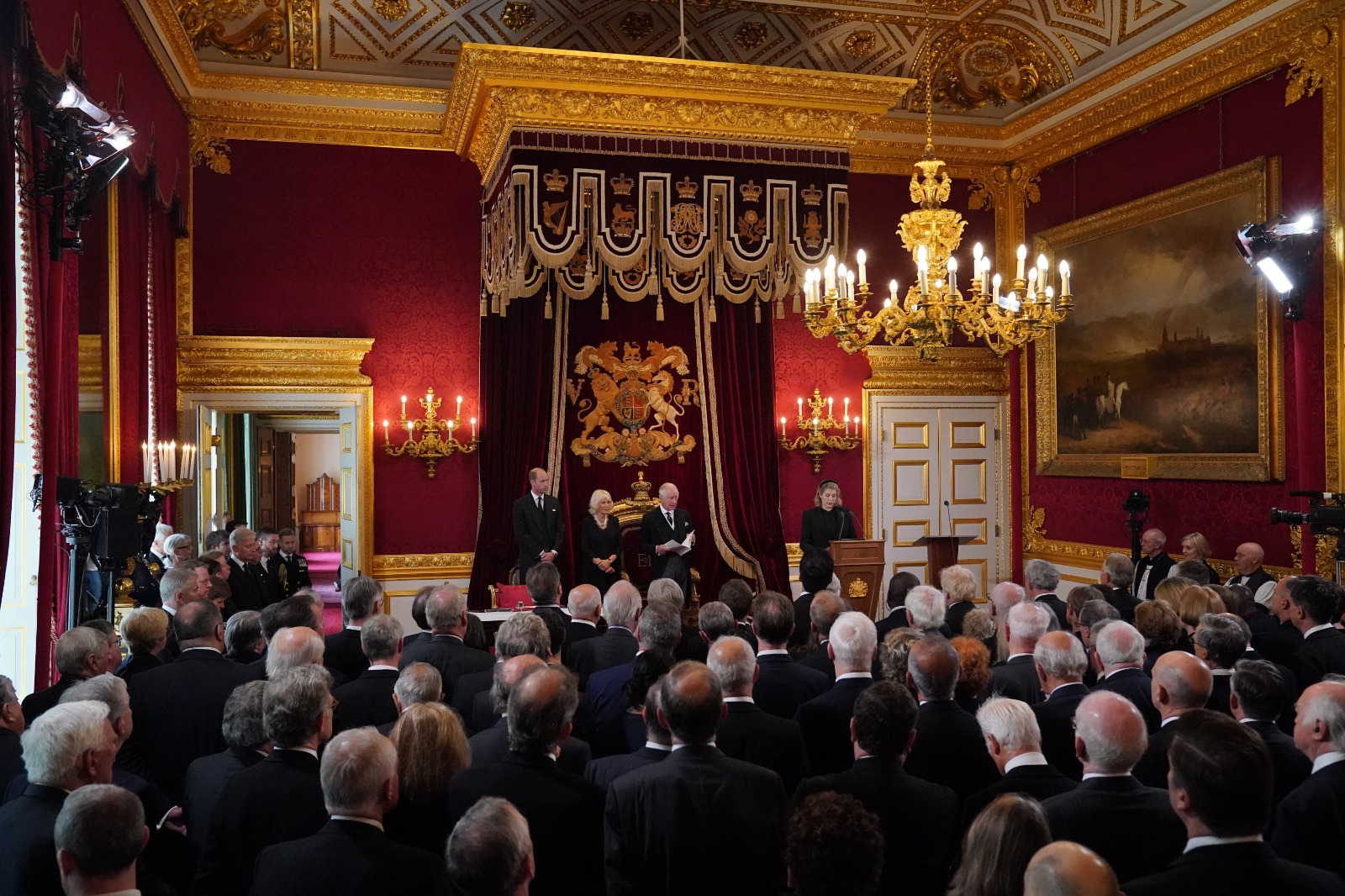 He said: “…Prince Charles Philip Arthur George, is now, by the death of our late Sovereign of happy memory, become our only lawful and rightful liege lord, Charles III…”

The meeting was staged in the state rooms of St James’s Palace, and the clerk declared to the room: “God Save the King,” with the privy counsellors repeating the famous phrase.

The new monarch became King the moment his mother died, but an Accession Council must be convened following the death of a Sovereign – usually within 24 hours. 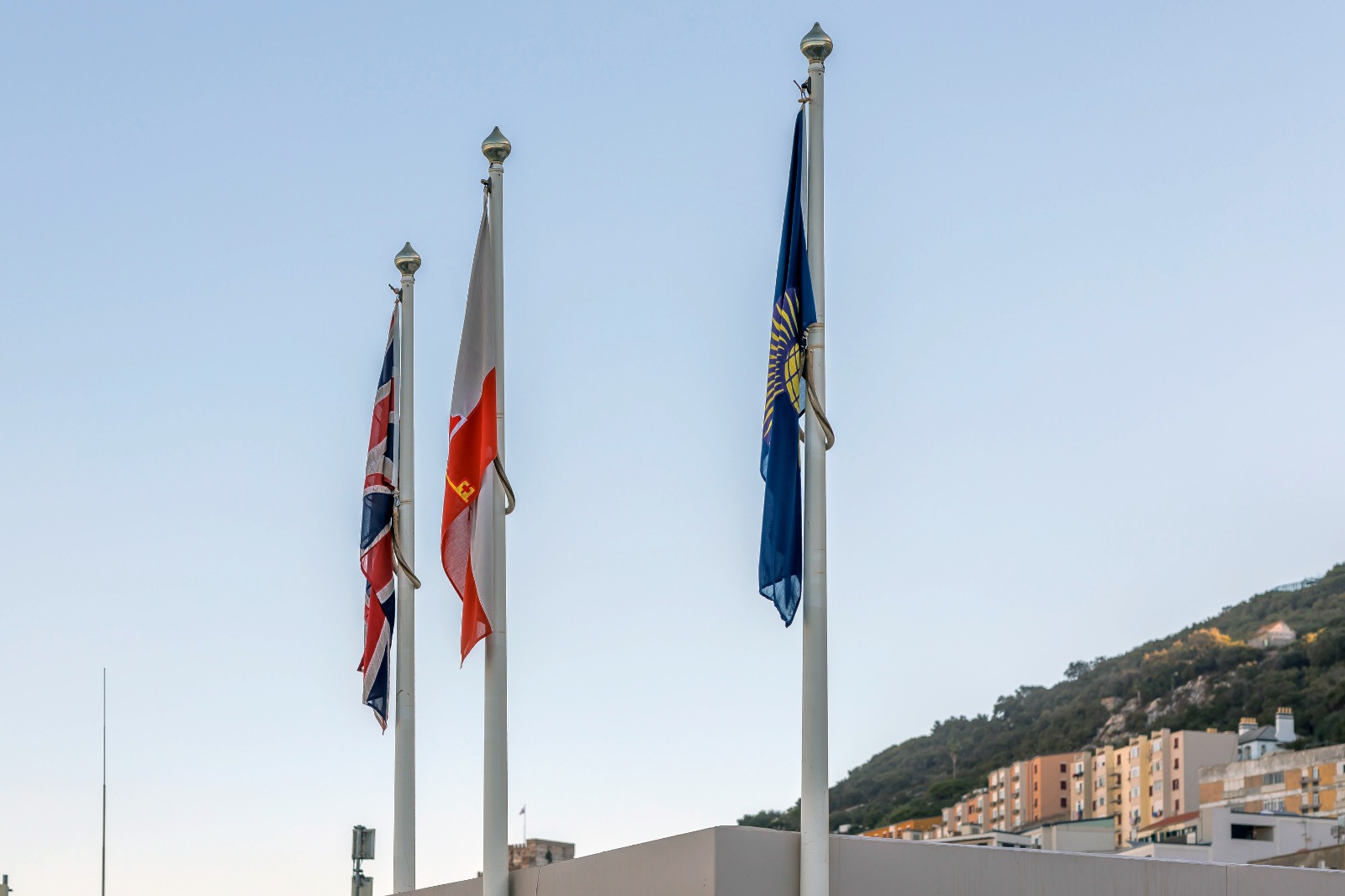 Gun salutes rang out from stations including the Tower of London and Hyde Park both home and abroad on Saturday to mark the accession of King Charles III.

Sixty-two rounds were fired near Tower Bridge beside the River Thames by the Honourable Artillery Company (HAC), and 41 rounds beside Park Lane by the King’s Troop Royal Horse Artillery (RHA).

At the Tower of London, a royal salute comprises the traditional 21 rounds, another 21 rounds signifies the loyalty of the City of London to the Crown, and a final 20 rounds were fired as the tower is a royal palace and fortress.

Shouts of “Long live the King” were heard as spectators lined up across Tower Bridge and along the Causeway inside the tower to watch the display.

In Gibraltar, the salute was fired by the Royal Gibraltar Regiment at the Naval Base.

Salutes were also fired from Cardiff Castle, Edinburgh Castle, Colchester, York, Larkhill near Stonehenge, naval bases in Devonport and Portsmouth and a number of stations at sea.

Reservists from 206 Battery 105 Regiment Royal Artillery fired the salute at Hillsborough Castle in Co Down watched by Steve Baker, minister of state for Northern Ireland.

The salutes were timed to coincide with the Principal Proclamation of the King, which was read by Garter King of Arms at 11am from the balcony above Friary Court, St James’ Palace.