Kitchenaid at 100: how a humble stand mixer company became a culinary giant

By Luke Rix-Standing
You'd think kitchens would have changed a lot over the last 100 years, and of course they have, but every now and then a contraption comes along that can stand the test of time.

To mark the centenary of KitchenAid and its iconic electric stand mixer, we combed through the company catalogue to track the product from a chance encounter in a baker's in 1908, to the multi-coloured models in stores today... 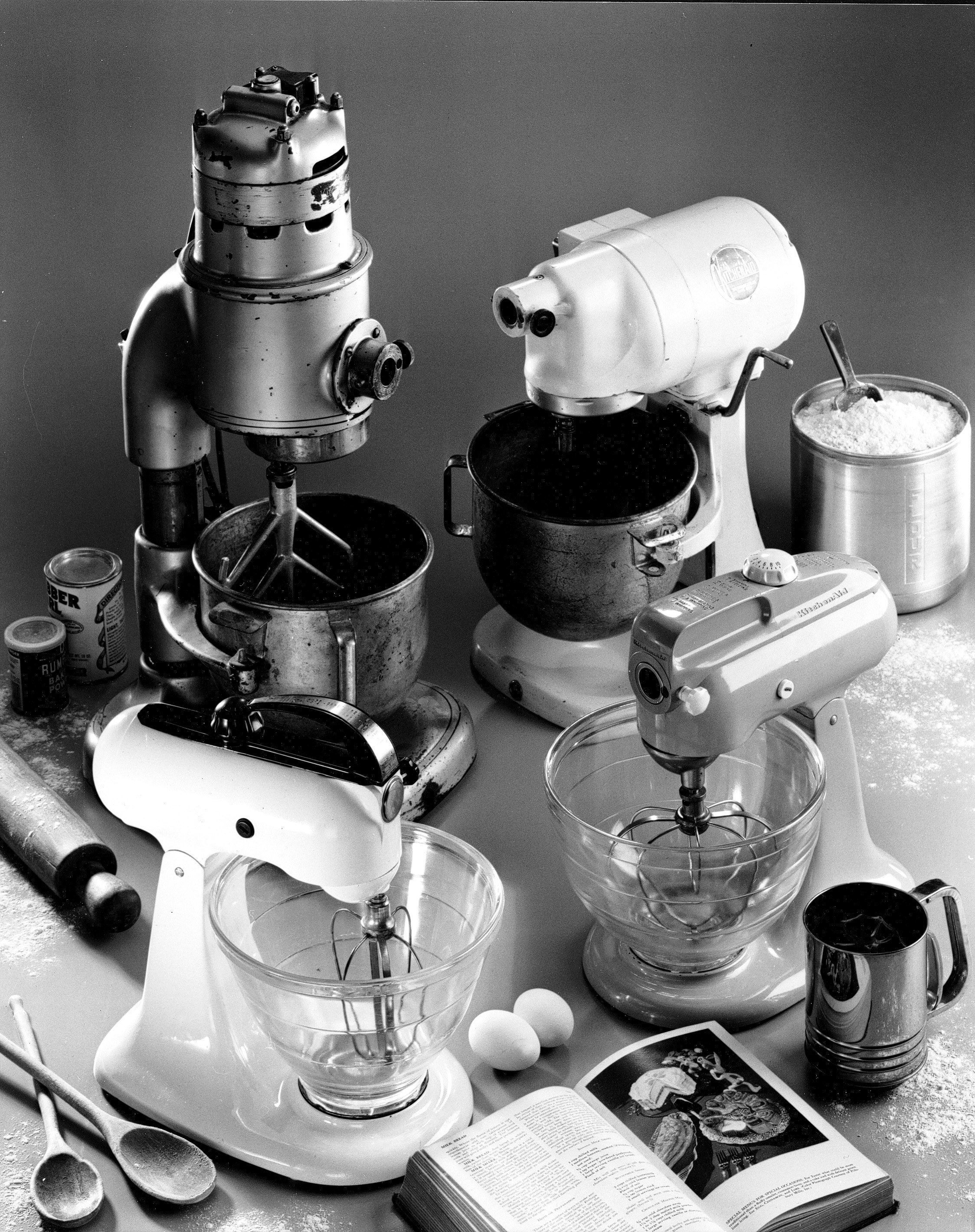 Herbert Johnston's stroke of genius
There was a time before the microchip, before C++ and Python, when technological invention did not require a PhD in computer sciences and several years in the lab.

For Herbert Johnston, an engineer at the Hobart Manufacturing Company in Ohio, inspiration struck at the local bakery. After watching a man struggling to mix bread dough with a large iron spoon, Johnston designed the world's first commercial stand mixer, a labour-saving device initially picked by the US Navy for use on their new battleships.

In 1919, as the dark days of war gave way to the roaring Twenties, a subsidiary of Hobart released the H-5 - a smaller, domestic model that became one of the first to bear the KitchenAid brand.

According to company lore, the machines were tested by the wives of their factory workers, one responding: "I don't care what you call it, it's the best kitchen aid I've ever had."

The machine's main innovation was "planetary action" - a novel design that rotated the beater in one direction, while rotating the bowl the other. Aside from this central function, the H-5 came with attachments like food grinders and juicers, leading to its branding as an integrated "food preparer".

Getting the look
The mixers found success, but in moderation, as modest manufacturing methods meant only four units could be made per day. Housewives were also sceptical that the H-5 could do more than just mix, so early marketing campaigns focused on the machine's versatility.

A 1931 advert in Good Housekeeping magazine declared KitchenAid could help with everything from "snowy-white mashed potatoes to wondrous angel-food cake", and offered readers in-house demonstrations, under the banner: "... and I thought I knew all about it".

1927 had already seen the release of the mixer's Model G, a technically similar but sleeker edition meant to crack the aesthetic demands of more fashionable homes. Its elegant curves helped propel the device into high society, and the kitchens of, to name but a few, Henry Ford, Ginger Rogers, and John Barrymore.

The Model G shifted 20,000 units in its first three years, and by the mid-Thirties KitchenAid was big enough to commission celebrity publisher and doyen of design, Egmont Arens to craft three new models.

As much about fashion as function, Arens pioneered the fluid 'silhouette' for which KitchenAid is now widely known, and many of its attachments still work on mixers today.

His third and final design - a variation of the Model K - had an untimely debut on the eve of America's entry into World War Two. KitchenAid's plant in Dayton, Ohio, was temporarily transformed into a munitions factory. 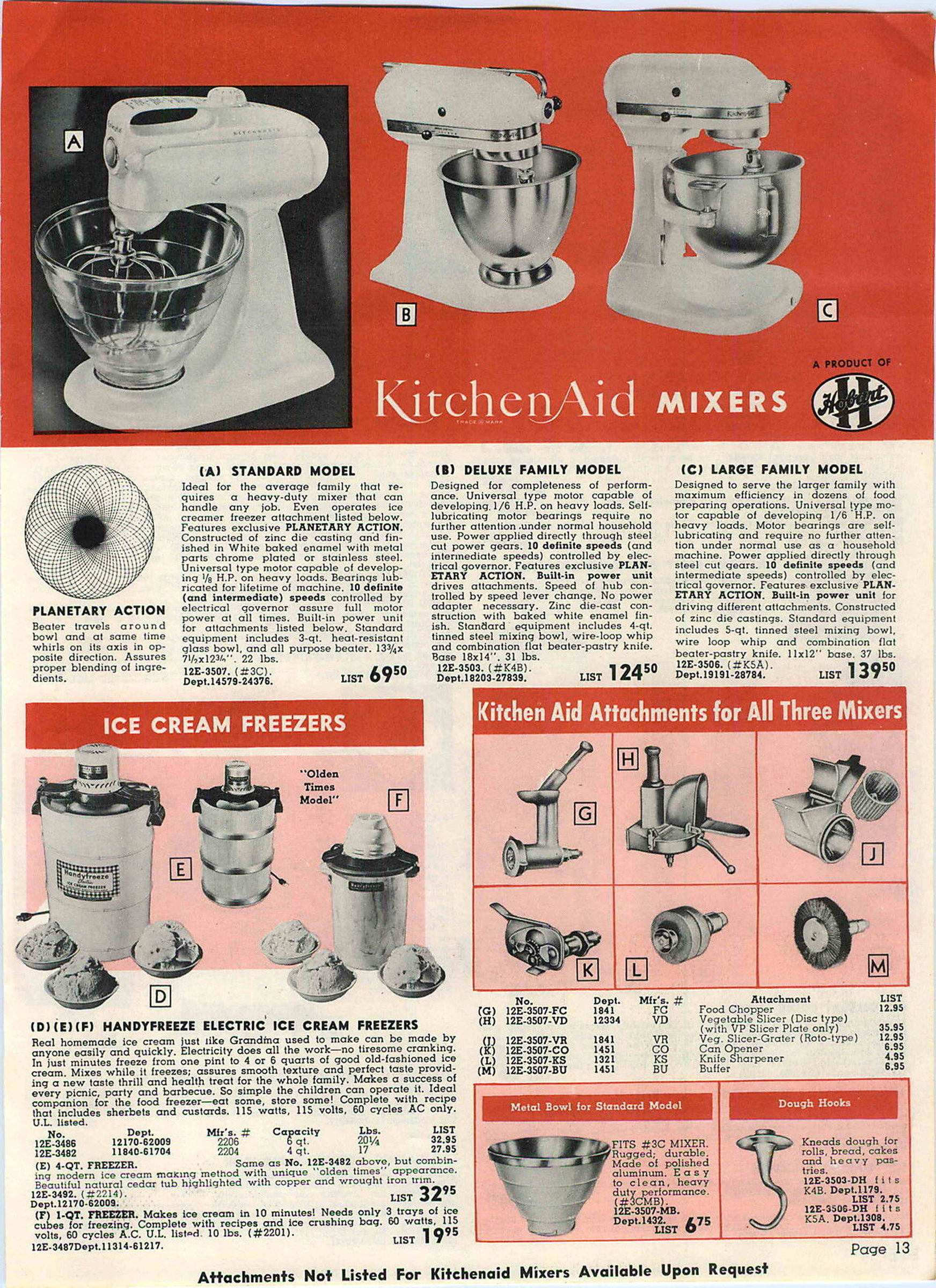 Same mixer, different day
The Model K presented KitchenAid with a problem - how to keep growing with a product that, in design and function, had reached what was nearly its final form?

The simplest answer was to expand its range. In 1949, the company acquired the patents for the first domestic dishwasher (proposed by one Josephine Cochrane way back in the 19th century), and promptly produced the KD-10, a dishwasher that distributed water through a pressurised system, rather than splashing it from plate to plate.

The purchase of the Chambers Range Company added cooking kit to the catalogue, and the first refrigerator joined the roster in 1986. The company has since expanded into blenders, ovens, cutlery and more.

As for the mixers, the solution was a new dash of paint. In 1955 a range of different coloured mixers hit shelves, in shades such as 'sunny yellow', 'island green', 'antique copper', 'satin chrome', and 'petal pink'. To modern consumers these may sound like tacky ice cream flavours, but in the mid-Fifties, they had real counter-top appeal.

In 1962, the K45 managed to mix things up once more, and, dressed in glorious Technicolor, it racked up the highest sales figures of any KitchenAid mixer to date. A 1986, $150 million deal saw KitchenAid taken over by Whirlpool Corporation, which still owns and operates the brand today.
(PA)