A 97-year-old woman has completed a month-long lockdown challenge battling Parkinson’s disease to walk the corridor of her home six times every day. 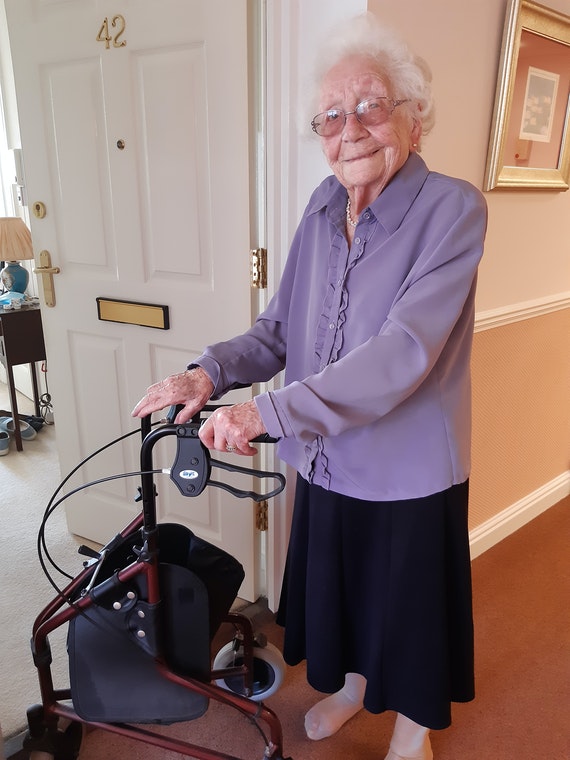 Lily Barnett, of Lee-on-the-Solent, Hampshire, has walked the eight-mile effort to raise funds for Help for Heroes.

And she has exceeded her target of £500 by so far collecting more than £3,000 for the charity that supports service personnel with injuries and illnesses.

Mrs Barnett was inspired to take on the challenge after her granddaughter, Alex Barnes, noticed she was becoming depressed because of her injuries.

She was inspired by Captain Sir Tom Moore’s charity walk and wanted to do something in memory of her husband Joe, who died at the age of 47 and who had served in the Second World War, as well as her father and uncles who served in the Great War.

Mrs Barnett herself worked in the East End of London making parts for glider planes and webbing, parachutes and uniforms for the military during the war effort.

Speaking after completing the walk, she said: “I found it challenging but I’m so happy to have kept my promise to keep going and raise funds for Help for Heroes.

“I didn’t think I’d be able to raise such an enormous amount of money at such a sad time.”

She added: “I’m very grateful and humbled by the many people who donated, some of whom I don’t know and can’t thank personally.

“Thank you all from the bottom of my heart.”

When asked what she is going to do now she is finished, Mrs Barnett said jokingly: “I’m going to have a rest, get on with my life and most probably take up tap dancing.”

During her challenge Mrs Barnett was sent a painting of herself by local artist Steve Webb and also sent a letter of support from her local MP Caroline Dinenage.

David Martin, of Help for Heroes, said: “Like Lily, many of our wounded veterans who have experienced trauma often stop going out and start isolating as they feel very low.

“We are incredibly grateful that she’s doing this to help us give our veterans the support they need to live their lives to the full. Thank you, Lily.”