Six goals from youngster Molly Karp, four from Brinkman, a hat trick from Rodriguez, two-a-piece for Alves, Rowbottom and Olivero and one-a-piece from Gilbert Ferro, cHacon Perez and Ballantine provided Lions with the biggest victory in senior domestic league football since Gibraltar’s entry into UEFA.
A 23-0 hammering of youngster Manchester 62 ladies by Lions Gibraltar Ladies brought back some of the realities the league presently lives through.
With thirteen goals in the first half there was little doubt of who was going to walk away with the points in this match. Lions Gibraltar women are currently the best performing side in the league with years of development behind them contrasting with Manchester 62s very young squad that has only this year entered the senior scenes although most of their squad, except for three players are just thirteen and fourteen years of age.
Lions Gibraltar, who are riding high, and ruthless when it comes to their onfield display are now with a 69 goal difference and six points ahead of their closest rivals Europa.
At the other end of the table Manchester 62 have a -68 goal difference, but last week claimed their first point in the division, something which considering the youngsters age and experience was more than admirable.
Hopefully the 23-0 defeat will be seen in the light it belongs to and not impact on the young teams morale as the league now heads to its final week before the festive break.
The next match should be an exciting one with Lions Gibraltar facing Europa on Wednesday. 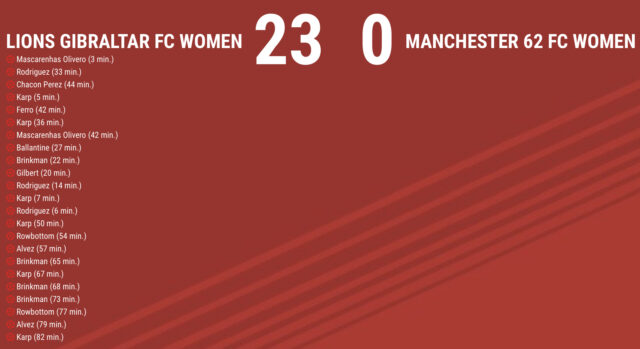