Lions Gibraltar Oranges gave little away this weekend even though they faced their own colleagues in Lions Gibraltar Black. a 5-0 victory against the Blacks secured a further three points for the Oranges as they lead the women’s futsal table from the start.
Biting at their heels Europa Women’s pinks picked up their second victory to secure their own three points. The result leaving them in second place in the table only on goal difference.
This weekend saw three 5-0 victories in the women’s futsal league with the third 5-0 victory coming from Lynx Women yellow who picked up their first victory after their draw last week against their colleague Lynx Women.
The Yellows were to come away with all three points against league debutants Hercules whose spirited and determined displays are receiving praise after only two matches played.
Whilst Europa women, considered the main rivals for Lions Orange rested this week Gibraltar Waves saw both their teams facing defeats at the hands of Europa Pink and Lynx Women.
Gibraltar Waves Yellows faced the heaviest defeat this weekend beaten 7-0 by Lynx women, whilst the Blues lost against Europa Pink.
The league will continue this weekend where the big match of the week will see the two Europa teams face each other.
Neither can afford to drop points as they both look at staying in the chase against Lions Orange 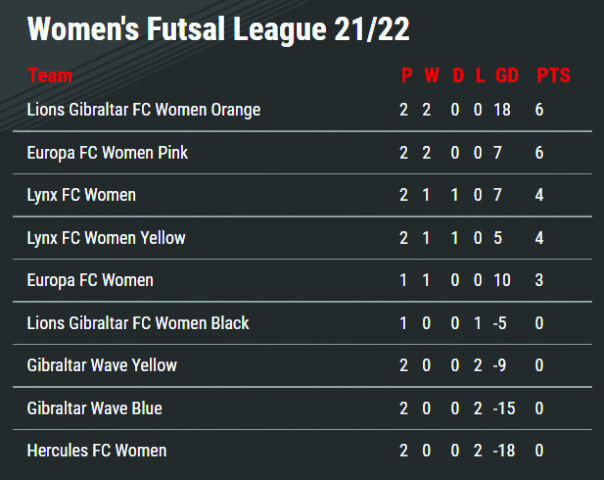