Louis Baldachino, celebrates his five year survivor anniversary since being diagnosed with pancreatic cancer in July 2015. Here he shares his story of how he never lost hope.

By Louis Baldachino
This time five years ago I was diagnosed with Stage IV Pancreatic Cancer and was basically facing a two to six months chance of survival according to statistics.

The diagnosis was clearly heading towards having the worst possible outcome. Furthermore, statistics showed that the overall five year survival rate (for all stages) was only 5%. It was simply a terrifying prospect! I still now find it emotional and frightening to read the diagnosis of the CUN (Clinica Universidad de Navarra) Pamplona medical report.

The following five years of my life since my diagnosis is the story I want to share with others. I would like to use my experience and faith throughout these years to add my grain of sand and inspire, in any way possible, other people to stay determined, positive and to “never lose hope” in whatever health issue they may have to fight.

In July 2015 in the context of a pulmonary thromboembolism and bilateral deep vein thrombosis I was diagnosed with stage IV pancreatic cancer with advanced pancreatic ducal adenocarcinoma which had already infiltrated the spleen, abdominal cavity, left adrenal gland and gastric wall.

On August 3, 2015 I started chemotherapy treatment following the Folfoxiri scheme for 3 months ending in October 2015.

This was followed by one month of chemoradiotherapy from October 28 to November 27. Scans done in early December showed the tumor had incredibly shrunk over 50% and the possibility of surgery became a reality.

I kept reminding myself to “never lose hope” - in January 2016 the 10 hour surgery was carried out (distal pancreatectomy, partial gastrectomy, splenectomy, and left adrenalectomy).

With surgery the survival chances did increase but still the overall forecast was depressing. Post-surgery revaluation revealed lesions in the retro umbilical and prevesical regions. For the next 10 months I was treated with 3 different intravenous chemotherapy treatments (carried out in CUN Pamplona and Madrid) but blood analysis and scans showed that the disease did ‘not go away’.

Things got worse in October 2017 as scans and other tests confirmed peritoneal progression of the disease. After much careful analysis of the findings and the very limited possibilities in the way forward I opted to participate in an immunotherapy clinical trial.

On the November 6, 2017 I received the first dose within the context of the clinical trial which continued until November 2019.

The clinical trial entailed weekly dose/treatment to be carried out in CUN in Pamplona. This, of course, meant the very long traveling every week for two years to Pamplona (normally treatment was done on Mondays, so travelled on Sundays to Pamplona, blood analysis/other tests done on Monday mornings followed by the actual treatment and travelled back later on Monday).

Between September 25 and October 16, 2019 residual disease which persisted in the upper intestines area was successfully treated by radiosurgery.

Treatment as part of the clinical trial ended on November 14 after which I presently continue immunotherapy clinical trial maintenance treatment every three weeks.

Apart from what I went through specifically for the various treatments and pancreatectomy surgery for the pancreatic cancer I unfortunately had to overcome many other obstacles and setbacks. To put things in perspective at the enormity of other related health issues I have also had to face during these past 5 years would be too long to describe in detail but I would summarise as follows. 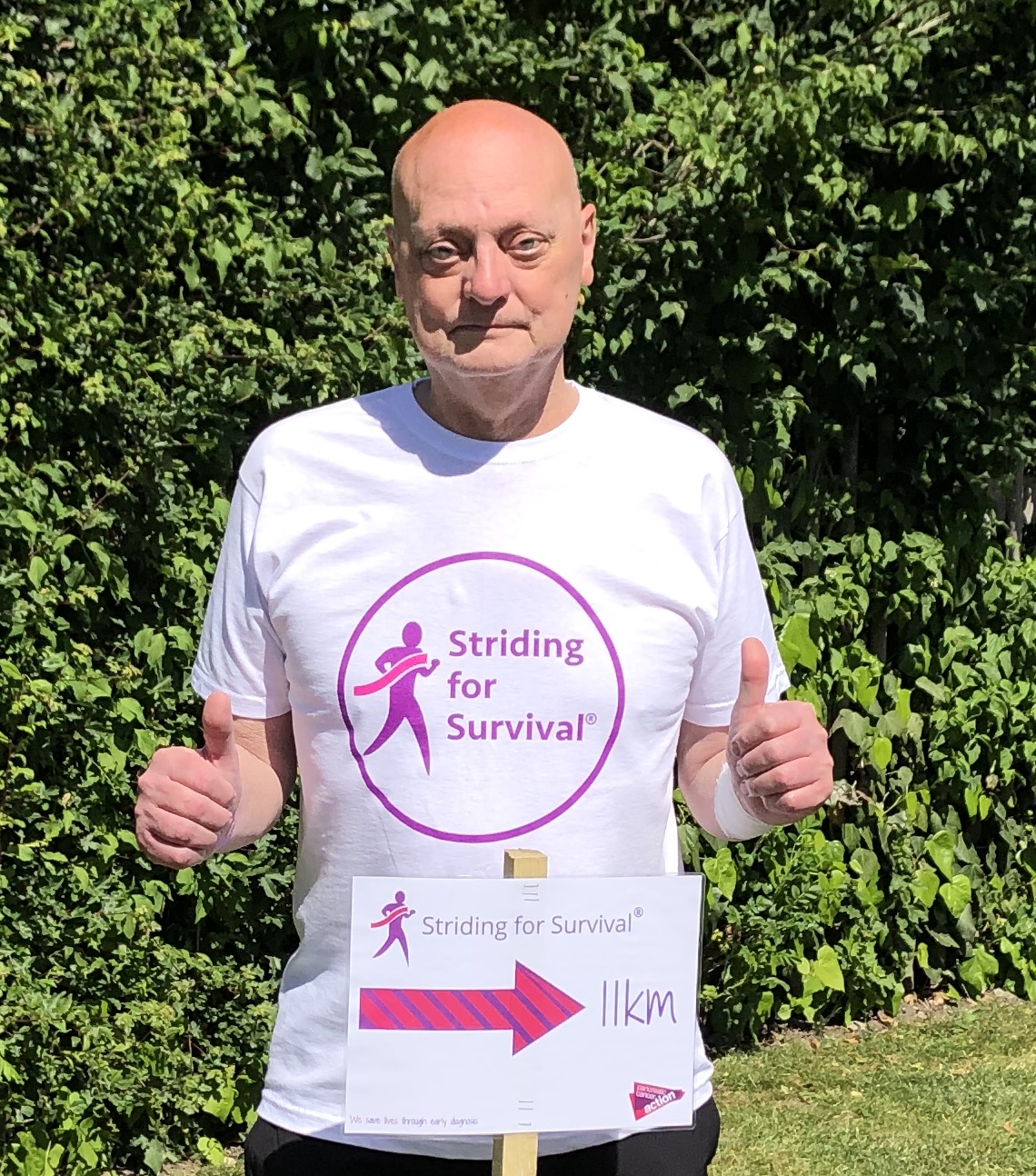 Three major surgeries had to be carried out, including ‘Sugar-Baker’ surgery (August 2016) intestinal bypass (September 2017) and embolisation of intestinal haemorrhage (October 2015)

Six minor surgeries were also carried out to remove lesions in the abdominal wall area.

It was immensely and desperately tough to say the least but absolutely determined to “never lose hope”.

Despite all that I have endured, I could not be a happier person today. The many positives I have experienced, so many happy moments and emotions that are too difficult or impossible to put into words.

The amount love and support from my family, friends, my work place management and work colleagues seems to have been endless.

I have the opportunity to revive ‘lost/dormant’ friendships and family relationships.

The opportunity to realise how lucky we are to live in Gibraltar and have the support of the GHA and its various departments.

The opportunity to reaffirm how lucky I am to have such a wonderful wife in Tamara and incredibly strong sons and daughter - Louis, Karl and Madison. In fact, the positives possibly outweigh all that I have gone through these past five years.

Many people from all walks of life have approached me to ‘congratulate me for my courage, determination and positive attitude’ and in some cases even expressed that I have helped them to fight their own health issues. My response is simply to “never lose hope”.

I do not have enough words to describe the absolutely top professionals in CUN Pamplona. Thanks to them I am here today. A quote I was told by CUN Oncologist Dra. Leire Arbea Moreno in May last year, perhaps highlights the magical success in reaching the pancreatic cancer five year survival milestone:
“Louis, you are one of our miracles of the 21st century!” (“Louis, eres uno de nuestros milagros del Siglo 21!”)
In CUN’s quarterly issued news magazine March 2020 edition as part of a 16 page report on the advances being achieved with immunotherapy and clinical trials featured an interview with me to highlight ‘my success story’ to date.

Thanks to the excellent results of the clinical trial I am now enjoying and living a near ‘normal life’ is just further evidence in what I have always believed since I was diagnosed of this horrible disease way back in 2015 - always keep fighting and believing.

10-year survival of the disease is 1%, meaning only around 1 in 100 people survive 10 years and beyond
So yes, it’s “easy to guess” that my next goal is the 10 year survival milestone! Hopefully it will not be as complicated and tough as reaching the five year survival milestone but come what may I will be keep determined, positive and strong and of course “never lose hope!”