A masterplan that lays out plans for the Northern Defences over the next three years was granted permission recently by the Development and Planning Commission. But what is being planned?

The Northern Defences are an array of fortifications that protected Gibraltar for centuries against any attacks from the north.

While access to the area was intentionally limited for many years, the Gibraltar Government now aims to open it up for residents and visitors alike to enjoy. 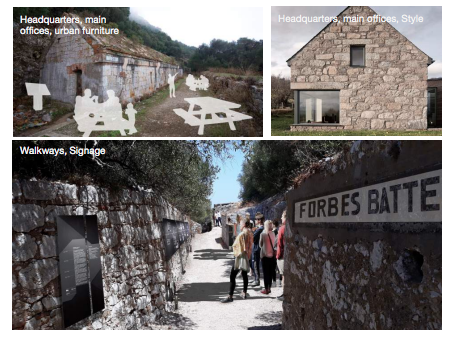 For several years now, the Government’s project director Carl Viagas has led a variety of projects, with the backing of the Deputy Chief Minister Dr Joseph Garcia, to clean up the area of the Northern Defences known locally as The Jungle.

The work involved clearing overgrown areas and rubbish to breathe new life into what had become an abandoned, somewhat unsavoury place.

The future plans for the area aim to make it a top tourist attraction on the Rock.

Currently there are two main pedestrian routes in to the Northern Defences, an open public entrance accessed through Crutchett’s Ramp leading up to Granada Gate, and an entrance accessed via a private estate in Casemates which is not open to the public.

The work carried out do far has already uncovered new historical gems in the site, including the base of a round tower that dates back to the early 1700’s.

“Standing on one of the greatest advantage points, this military fortification was one of the most important in the defence of the north,” the masterplan for the Northern Defences project states.
“The control of the tower was advantageous and desirable to attackers as its location bypasses all other military defences on the rock, especially the Grand Battery cannons protecting the Landport fortress entrance.” 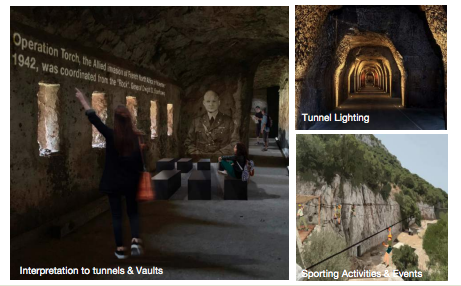 Other discoveries include a large gallery which has been uncovered near Forbes Battery.

“The gallery is in the shape of an amphitheatre and was constructed in 1789,” the plan states.

But there are other, older features that have been uncovered after years abandoned and forgotten.

The Hanover Line, for example, “...is a new wall that has been excavated and discovered dating all the way back to 1627.”

It offers “a possible new route that through the Northern Defences that is yet to be discovered.”

According to the masterplan, the project for the site consists of three different zones.

Zone 1 covers Casemates Square, where there are existing access paths that start at Casemates and lead directly up to the Northern Defences.

Permission was granted at the last meeting of the Development and Planning Commission to create a new staircase from Casemates to the Northern Defences.

Zone 2 comprises of the King’s Lines and Queen’s Lines, where much of the previously existing rubbish and debris has been removed and all overgrown vegetation pruned back to reveal the defensive structures more clearly.

However, more work is needed to reveal this further

In Zone 3 there is the Princess Lines, where some clearance work has already been undertaken.

“But the considerable expanse of this, and greater distance to the entrance access area, means that this needs to be extended further,” the plan states.

“Smaller structures and defensible lines [are] in many instances in need of extensive repair, with years of disuse and some vandalism having taken their toll on the historic structures.” 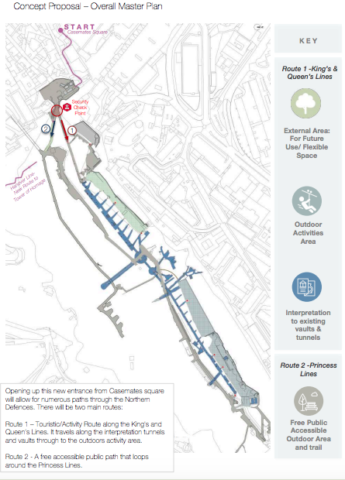 The masterplan strategy aims to bring new life and activity to a site which has previously been neglected, but to do so in a manner that is respectful of its heritage value.

“Using the old Moorish wall as a central pedestrian spine, sites from different periods of history are reconnected, creating a new route that is readily accessible from the town centre,” the plan says.

“The route would cater to both visitors and locals, providing a mixture of interpretation of the historic sites and structures as well as new recreational uses and leisure activities.”

“The Northern Defences, encompassing numerous military structures and tunnels, are to be re-opened to the general public after years of disuse and neglect, curbing the vandalism and disrepair this area currently faces.”

“The Northern Defences intervention, as a new public space added to the urban amenity, overpass its site limits to fluidly connect with the urban life, the city and its attraction points.”

The project the plan states that zones could be linked by improved interpretational and way-finding signage, with this signage to be homogenous to that of the Nature Reserve.

It envisages the creation of a public area that provides for a diverse range of outdoor activities and uses aimed at adults and children, including recreational paths mixing both historic sites and structures.

Site maintenance and management would be supervised by a private operator.

The plan states that opening up a new entrance from Casemates Square will allow for numerous paths through the Northern Defences.

There will be two routes, one a Touristic/Activity Route along the King’s and Queen’s Lines that “travels along the interpretation tunnels and vaults through to the outdoors activity area.”

The second route would be a freely accessible public path that loops around the Princess Lines.

New signage, entrance gate and lighting will also be incorporated into the new stairs.

In Zone 2 at the King’s and Queen’s Lines, the aim is to consolidate outdoor activities in this area, “but with a view to centre around a flexible use of the spaces available for multitude of different sporting activities; as well as provide interpretation centres to existing vaults and tunnels.”

The goal is to establish “a vibrant visitor attraction for Gibraltar. Conceptual activities to include Zipline and Ferrata Routes all along the historic line.”

Again, the hope is to have this site managed by a private operator.

There are plans too for a ‘Via Ferrata’, an Italian term which means ‘iron path’ and is used to describe a protected climbing route, built with a steel cable rail fixed to the rock, metal steps, ladders, suspension bridges and zip wires.

“A Via ferrata would be a great way of exploring the Rock,” the masterplan states.

“This activity does not require previous mountain experience and defiantly promotes a healthy lifestyle, whilst encouraging family time and shared positive experiences.”

Plans for a zip wire follow similar goals, with the masterplan suggesting potential launch points for what is envisaged as a circular 165m highline route.

It would be “a great way to view the nature and historic sites of Gibraltar and Northern Defences from a different angle,” the plan adds.

In Zone 3 at Princess Lines, the plan is to “embellish” connections to the Road to the Lines.

“With relatively minimal intervention, existing structures will be appropriated for new uses, including offices and storage,” the masterplan says.

“Lighting, signage and urban furniture [will be] added to encourage public use, ensuring that the area is kept safe and accessible, and that vandalism is curbed.”

“This area will continue being full accessible to the general public for leisure. Existing links to Princess Royal’s Battery to be explored in the future.”

At the end of the three-year masterplan, the hope is that the project will encourage investment in the wider surrounding areas.

“We believe that there is tremendous potential for this project to serve as a catalyst for more wide-ranging improvements that could encompass a whole series of adjacent sites that are currently not being capitalised on,” says the masterplan.

“With its’ strategic location in such close proximity to Casemates and Main Street, we feel that the Northern Defences will form the key to creating a revitalised and upgraded visitor experience that will transcend beyond the limits of the site.”

Some of these areas include the sites of Haye’s Level, the WWII tunnels, Princess royal batteries, the medieval castle wand wall, the Great Siege Tunnels and the Road to the Lines.
New routes could include the Hanover Line to the Tower of Homage and future connections to the Upper Rock Nature Reserve.