Miss Gibraltar up close in nature with Gibraltar’s macaques

Brian Gomila, who hosts these popular Macaque Educational Outings, explained: “When it comes to the macaques there are many common misconceptions.”

“Some believe they are tame and can be touched, others that they are aggressive.”

“There is also the general notion that there is not enough food for them which is why they come down to town.”

“Arguably they are Gibraltar’s most famous natural attraction and marketed as such, but they are so much more than this.”

“First and foremost, locals should be able to feel as though they can genuinely enjoy the macaques safely, otherwise there is nothing tangible to them for coexisting with monkeys.”

The aim of the Outing was for the three to spend time with the macaques in their natural environment, getting to experience them as part of the wildlife and in so doing dispel these myths.

“The Misses are Gibraltar’s ambassadors and when you come to think of it, they are the only beauty queens in Europe that live with free-living monkeys,” Mr Gomila said.

Faith, Jaylynn and Michelle were taken aback by the whole experience and learned about the macaques as primates in the same way that humans are primates.
This made the experience relevant to them. 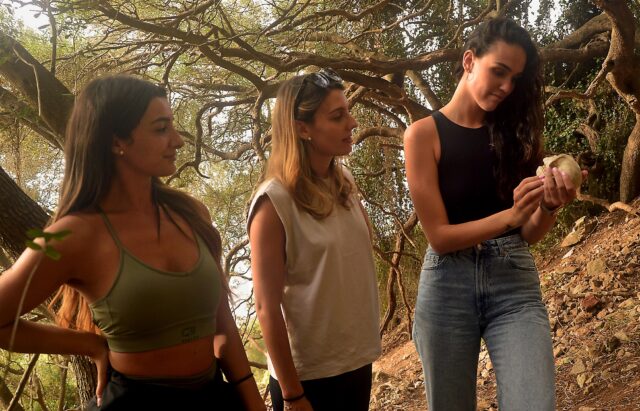 Spending time with the macaques in their natural habitat, bears no resemblance to seeing them interacting with tourists for treats by the roadside.
Arguably the most important feature humans have in common are our opposable thumbs which make us dexterous.

The Misses were able to observe this close up, sat next to an intimate allo-grooming session, which incidentally, they now know, helps to build and restore bonds between the macaques, aside from serving a hygienic function.

Natural foraging on leaves of the lentisk tree, drupes of the wild olive tree and digging up of seeds were observed throughout the outing now that the prospect of treats had disappeared.

Faith, Jaylynn and Michelle saw for themselves that the macaques are resourceful and there is plenty for them to forage on.

The macaques are mainly folivorous (leaf eaters) and so apart from any dietary consequences of eating food handouts, treats elicit competition between group members.

In contrast when they forage, they can all eat without competing with one another since leaves grow dispersed.

“Brian has showed us another side to our macaques,” said Faith.

“Seeing them in their natural habitat has made me realise how little we know about the monkeys we share our Rock with.”

At one point there was a social dispute involving several troop members scurrying and sending dust clouds in the wake.

Mr Gomila explained that intra-group conflicts are a daily occurrence, but added: “Ultimately one can determine how good a relationship between any two monkeys is, based on the percentage of conflicts between them that get reconciled as this is an indicator of how much they value one another.”

The three Misses about the social hierarchy and observed self-directed behaviours by subordinates in the presences of dominants, such as ‘nervous’ scratching and displacement behaviours to try and appear casual and came to realise just how many behaviours we have in common with them.

Jaylynn said: “It was fascinating to learn about the troop hierarchy and how they relate to one another based on their differences in rank.”

The Misses were shown the remains of a macaque which had died in a wooded area and attempted to determine the sex of the macaque.

The macaques are sexually dimorphic and so exhibit morphological differences between the sexes.

Miss Gibraltar Faith Torres had actually learned about sexual dimorphism as part of her dissertation on Drosophila melongaster (the common fruit fly) for her Biomedical Science Degree and so found this particularly fascinating, as she examined the macaque skull. 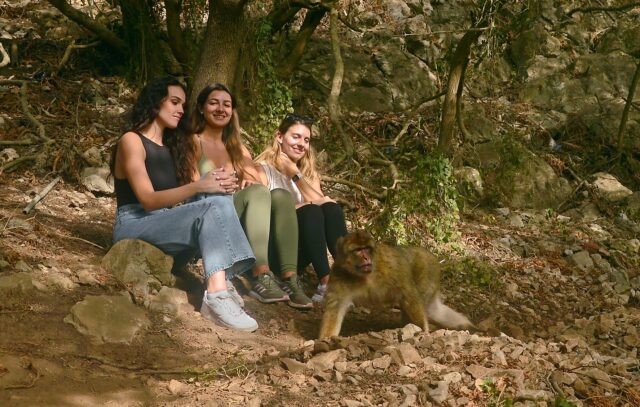 First Princess Jaylynn Cruz recalled when she used to accompany her dad, a taxi guide and avid macaque enthusiast, to see the macaques as a young girl and found learning about the macaques’ social behaviours particularly relevant to her career as a teacher.

She also said that it will be particularly useful for her up and coming Miss Earth pageant which advocates environmental awareness, conservation and social responsibility.

Second Princess Michelle Lopez Desoisa was, out of the three, the most apprehensive towards the macaques at the start of the outing.

“The macaques are habituated to people and tend to behave the way they perceive you,” Mr Gomila said.

“One may be afraid of the macaques, but the macaques do not need to know that. One should come across as assertive, and try not to be conditioned by a macaque, as only subordinate monkeys give way or ask permission to pass by dominants.”

“There should also be a conscious effort to try to communicate your intentions when going past a macaque so as to avoid startling them which can cause them to react aggressively or direct a round mouth threat at you.”
“A timely cough or clearing your throat can be surprisingly effective.”

After the outing Michelle said: “It was a great experience. I have always felt extremely scared to be around the macaques however after this experience I feel I know them much better.”

On the whole Michelle, as did Faith and Jaylynn were pleasantly surprised at having warmed up to the macaques as much as they did.

They collectively came to realise that observing the macaques responsibly and non-intrusively is much more rewarding and causes them less social disruption.

The experience proved to be an eye-opener and no doubt helped instil a greater appreciation towards our much-misunderstood macaques, we are fortunate to share our Rock with.

This article and the accompanying images were prepared by Monkey Talk.