This Memorandum underpins and describes the relationship between the GDPF and the GDP and the wider MOD.

With a new logo for the GDPF, the updated MoA reflects necessary changes to ensure that the GDPF remains effective in its representation of all of its members, British Forces Gibraltar said in a statement..

“Following an open and transparent election process which saw the current committee elected with a clear mandate from its members, I am delighted to sign this new MoA which marks a new chapter in relations between the GDP and its police officers’ representative body,” GDP’s Chief of Police, Rob Allen said. 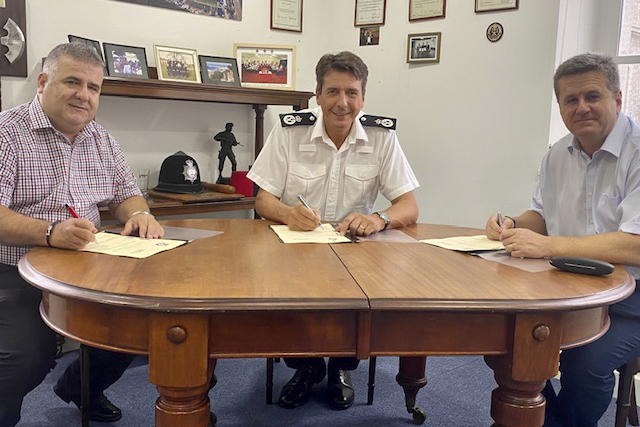 “I am confident that the relationship that we have already begun to forge with the Chairman and his Committee will be invaluable as we work together to address the various challenges facing our force.”

“With a recently published three-year Policing Plan there will inevitably be some change within the Force as we continue to adapt to deliver the MOD’s policing needs in Gibraltar.” The Chairman of the GDPF, Police Sergeant Christian Hermida, added the agreement is an “important step” for the Federation, the Chief of Police and MOD Gibraltar.

“I am very happy with the way that the Federation Committee and the Senior Leadership Team have managed to make rapid progress in negotiating this MoA,” Mr Hermida said.

“Both sides have demonstrated a willingness to work together in order to achieve a positive outcome and I am sure we can use the same approach as we work together in the challenges ahead.”[Text Wrapping Break]Richard Johnson, HQBF’s Command Secretary, echoed Mr Hermida on the importance of this MoA.

“As the GDP continues to adapt to meet the needs of British Forces Gibraltar, it is important that our relationship with the GDP Federation also evolves,” Mr Johnson said.

“I hope this MoA will provide the bedrock for constructive relations in the months and years ahead.”