by John M. Piris
After two years of pandemic, isolation and travel restrictions motorcycle fans were allowed back to the Gran Premio Red Bull de España at the Circuito de Jerez – Angel Nieto.
A total of 123,000 fans attended the event over the weekend and with temperatures in the low thirties the scene was set for some great racing.

The stands were once again full of cheering fans eager to watch the three classes of bike races and they were not let down. 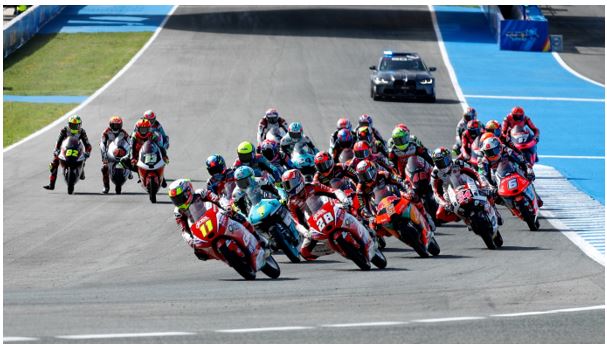 Guevara #28 may have had pole position, but Garcia #11 beat him to the first corner at the start of the race.

The first few laps both riders tried to pull ahead creating a small gap from the pack and Izan Guevara #28 managed to get back up front to lead the race. The pack caught up and the group changed from two to six riders. 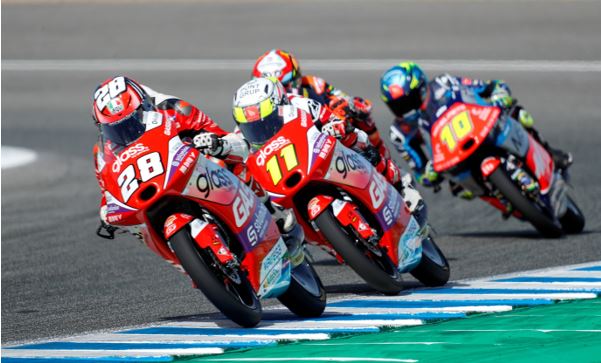 At the last lap both KTMs lead followed by team GasGas. Guevara #28 moves to 3rd position only to lose it a couple or corners later to Garcia #11. Masias #5 takes the lead, only to lose it to Öncü #53. Garcia #11 moves up to 2nd. 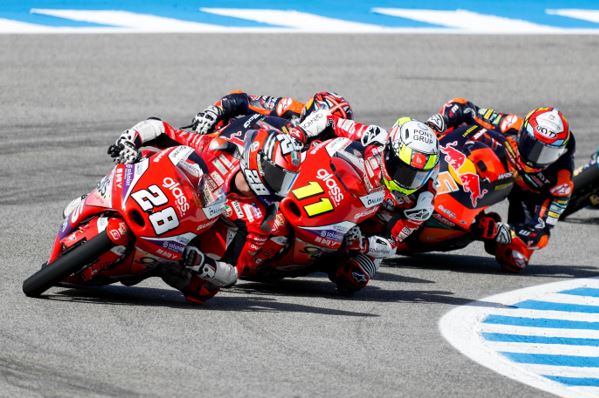 At the last corner Guevara #28 takes it wide and rides around Garcia #11 and Öncü #53 to take the win. Garcia #11 takes 2nd and Masias #5 takes the inside line and snatches 3rd place from Öncü #53. 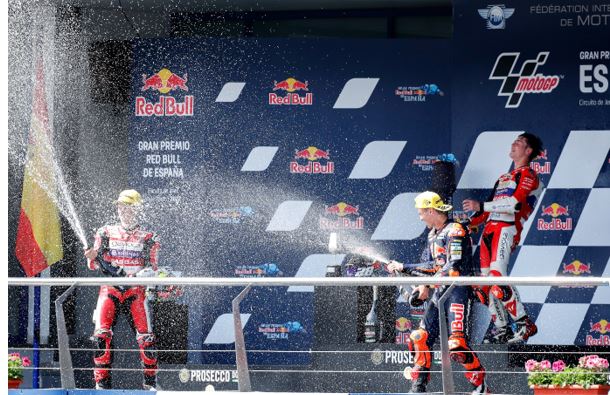 An all Spanish Moto 3 podium.

The Japanese rider Ai Ogura #79 of the Idemitsu Honda Team, who started in his first ever Moto2 pole position, took charge of the race to win his first race in this category. 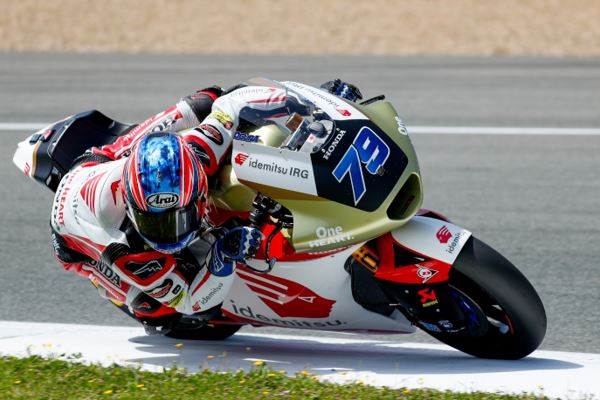 A brave Arón Canet #40 (Flexbox HP 40 Team) who had surgery after he broke his left radius at the previous race came second followed by Tony Arbolino #14 (Elf Marc VDS Racing Team) in third.
Ogura #79 lead the race from the start, not making a single mistake with a comfortable 2.5 second lead as he passed the chequered flag.

Canet #40 and Arbolino #14 fought for second place changing positions during the first stages of the race, only to settle down in their respecting winning positions. 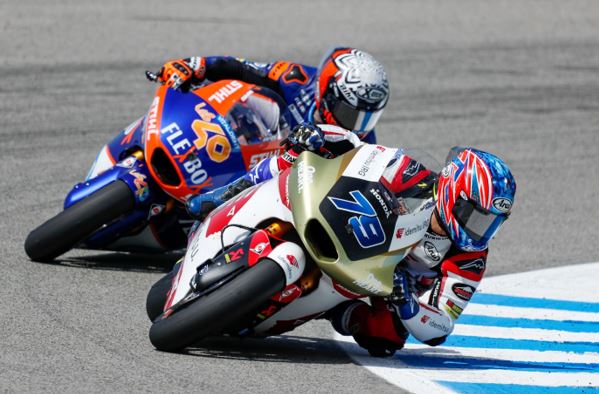 Track temperature was at 40 degrees making it very greasy with some riders losing their front end while braking.
Notably, British rider Sam Lowes #22 (Elf Marc VDS Racing Team) who was in fourth place, lost his front end and crashed while braking on turn 8 and Jake Dixon #96 (Inde GASGAS Aspar Team) also lost his front end on turn 13 taking out Fermín Aldeguer #54 (MB Conveyors Speed Up) who did manage to get back on the track only to retire a few laps later. 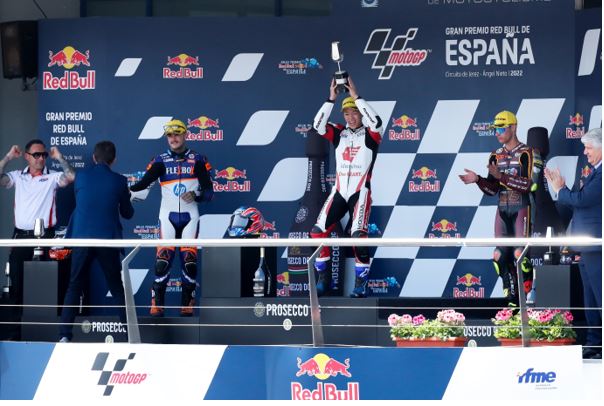 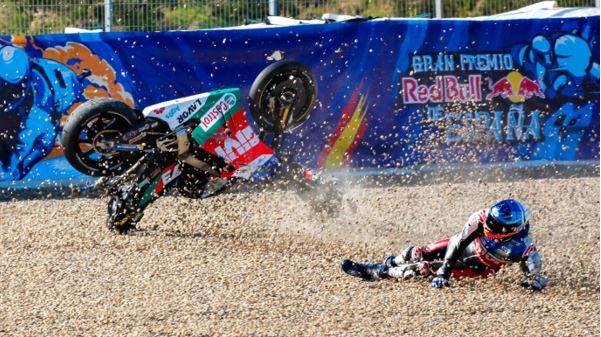 MotoGP
Bagnaia dominates in a head-to-head with Quartararo.

Francesco Bagnaia #63 (Ducati Lenovo Team) takes his first win this season followed by Fabio Quartararo #20 (Monster Energy Yamaha MotoGP) and Aleix Espargaro #41 (Aprilia Racing) in 3rd place.
Bagnaia #63 and Quartararo #20 had qualified on Saturday in 1st and 2nd place respectively and from the start of the race Quartararo #20 never lost sight of Bagnaia #63. 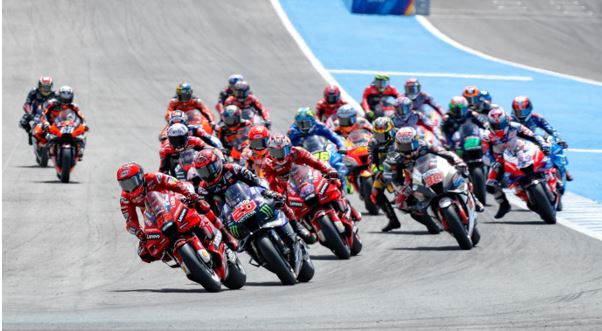 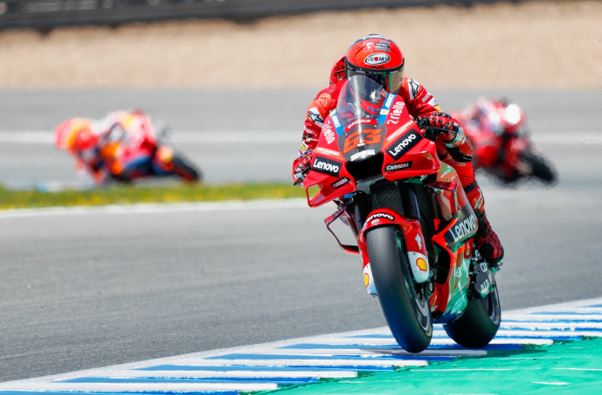 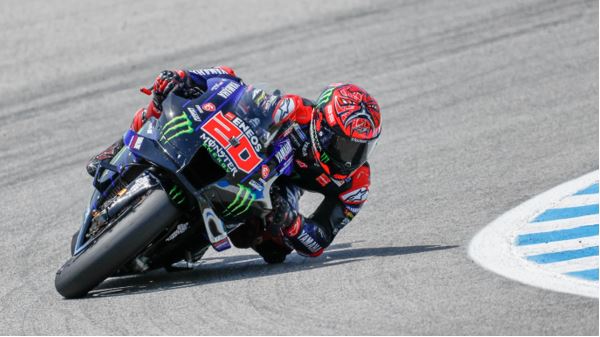 The pair managed to get away from the pack crossing the line with 10.9 seconds gap to 3rd place Espargaro #41, who moved up from 5th to 3rd when Marc Marquez #93 (Repsol Honda Team) lost the front end on turn 15 and saved it with his left elbow, four laps before the end of the race. 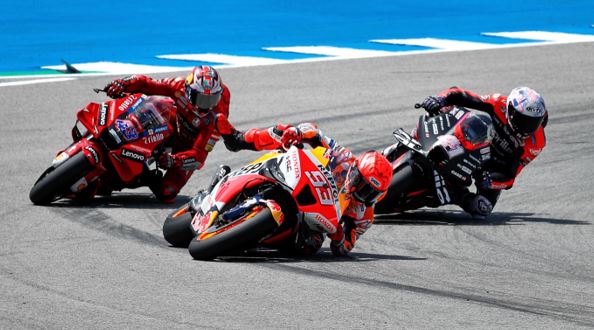 Jack Miller #43 (Ducati Lenovo Team) had been in 3rd place for most of the race with Marquez #93 and Espargaro #41 hot on his tail.