‘Movember’, the time of year where men grow out their moustaches in a bid to raise awareness for prostate cancer begins tomorrow, with Prostate Cancer Support encouraging men across the Rock to grow their facial hair over the next 30 days.

The Chairman of Prostate Cancer Support Gibraltar Derek Ghio said this year due to Covid-19 restrictions the month-long campaign will take place online. 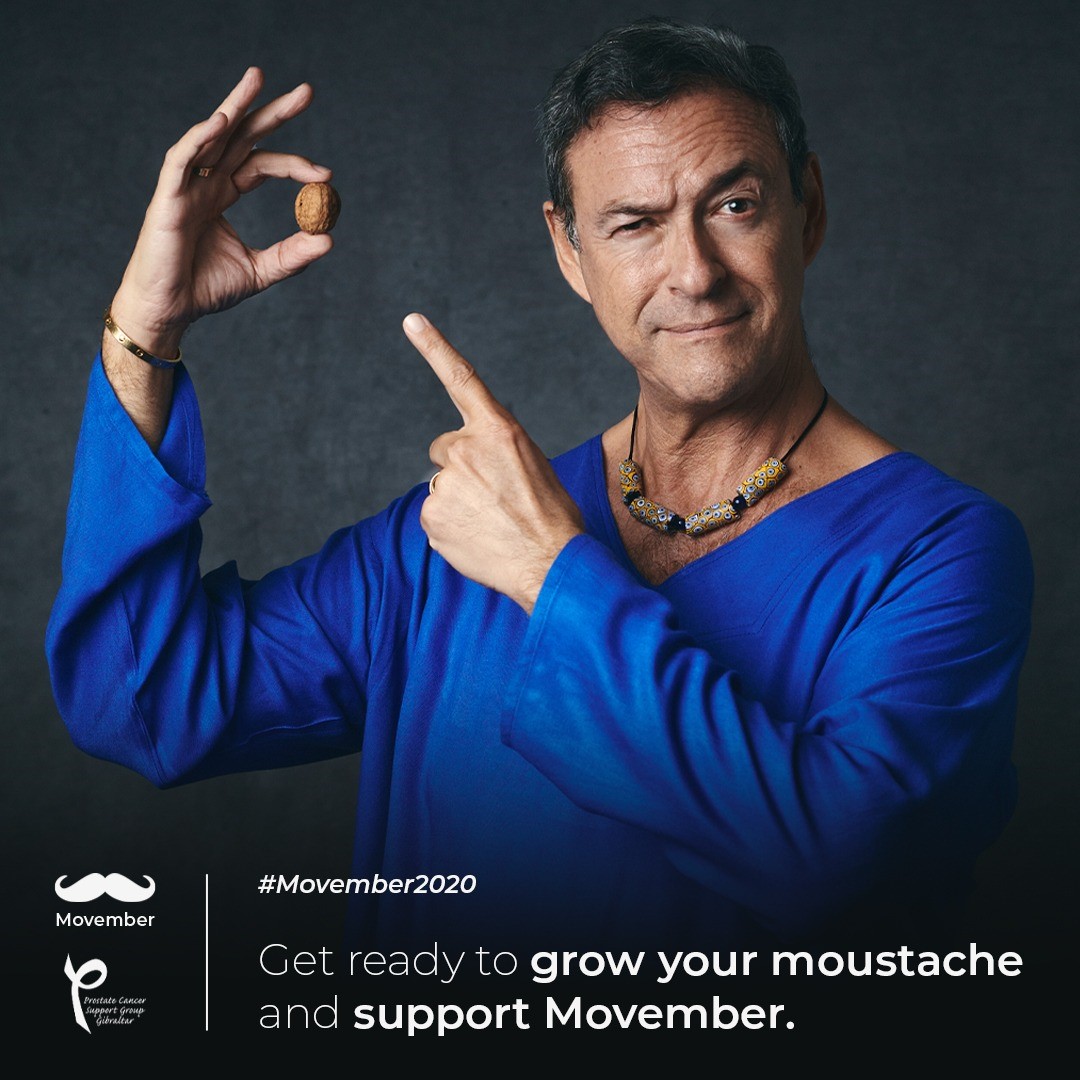 Movember is the annual event held in November, and Prostate Cancer Support Gibraltar is asking people to support the campaign by growing and grooming whatever style of moustache they want to. They are also asking women to support and encourage the men too.

The campaign starts off with a video launch where various people, including prostate cancer survivors, speak directly to the camera and make a plea for people to get their PSA checked.

This test measures the amount of prostate-specific antigen (PSA) in your blood. PSA is the protein produced by the prostate gland.

“Judging by feedback, testimonials and Facebook statistics it confirms our belief that more men are now asking their GPs to check their PSA levels,” said Mr Ghio.

“We have what we call a buddies group and through the buddies group we get more people joining all the time. We get stopped on the street in Gibraltar and then I also get calls on the charity helpline. We have been getting calls every week.” 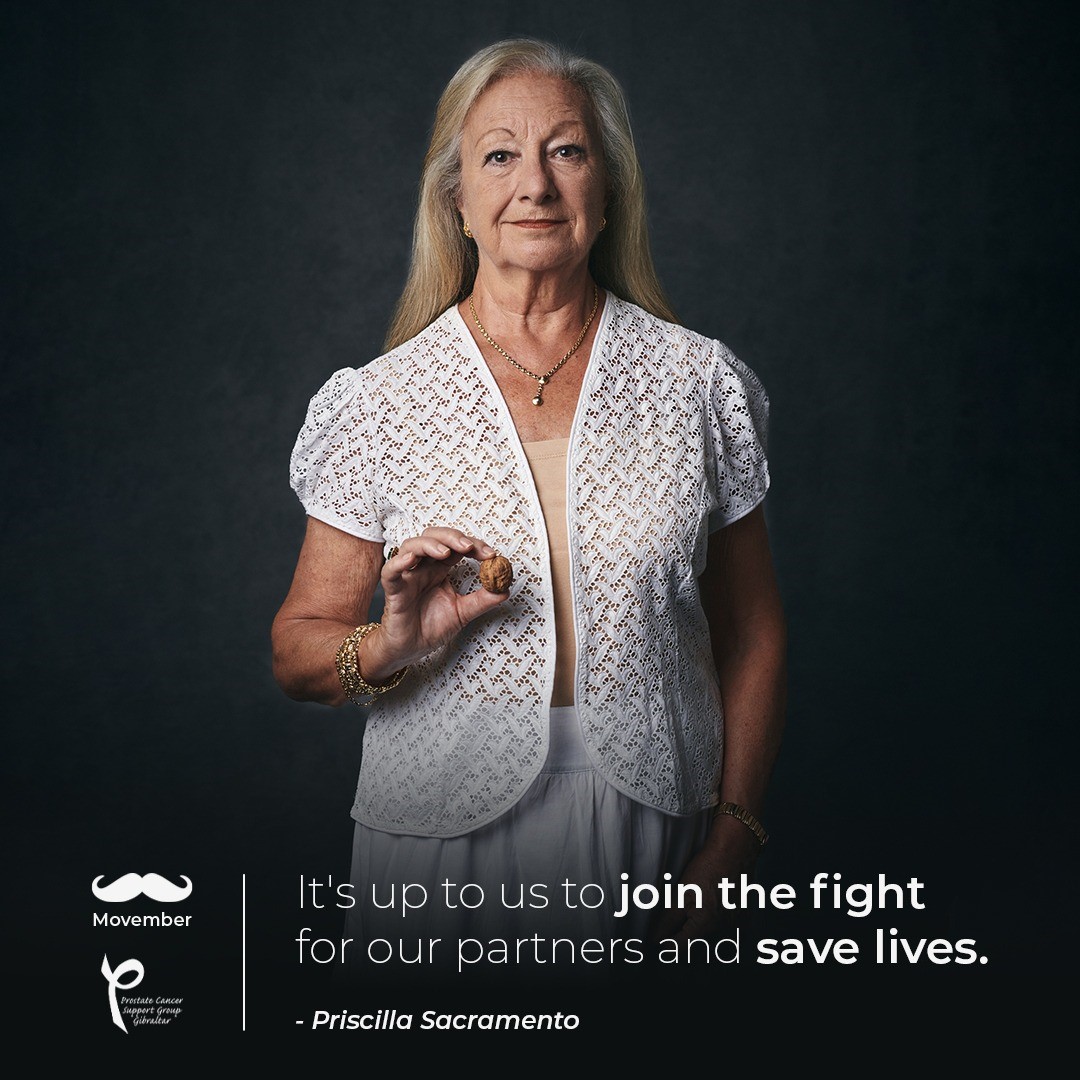 The PSA test is not flawless but Mr Ghio said it is the best they have and there is no alternative.

The support group started in 2011 and since then it has been serving men, their families and the community of Gibraltar.

“This would not have been possible without the help of involvement of past and present committee members and trustees,” said Mr Ghio.

“It would also not be possible without those who continue to raise funds for the support group year in and year out. Or without the support of the GHA, the ministers, the Kusuma Trust, doctors and the Cancer Relief Centre.”

This year there is also a photo campaign that stars well-known local couple Henry and Priscilla Sacramento.

“We are targeting men’s partners because we all know that partners are very effective in the art of persuasion,” said Mr Ghio.

The Moorish Castle will be lit up blue from November 2 to 8. Plans were made for a clay shooting fundraising event, a wine tasting event in My Wines and a Harley Davidson ride out on but the Government has now informed the charity that these need to be cancelled. However, a run organised by the GAAA is due to take place on November 22 at present.

Also during the month the Gibraltar Re-enactment Society will carry out their usual parade down Main Street on a Saturday but this time wearing a mask that has a moustache promoting the awareness campaign.

At the end of the month it is tradition that men gather in Casemates and a big shave off takes place.

At present, Mr Ghio is unable to say what will happen regarding this but it is unlikely.

But, the charity is looking at options that will be in keeping with Covid-19 measures.

Mr Ghio shared some statistics that showed that in the UK alone one man dies every 45 minutes from prostate cancer. Prostate cancer surpasses the number of breast cancer patients being diagnosed.

“We always advocate early detection, if we do that they stand a very good chance of survival,” she Mr Ghio.

“If cancer is in the prostate and you get it early the chances are you will survive.”

The charity wants people to know that they are there for people during all steps of their prostate health, from pre diagnosis to post.

The charity is appealing to companies or corporates to contribute funds to help support its awareness campaign and to achieve its 2019-2020 aim of purchasing Transperineal 3D Fusion Biopsy equipment which will allow for diagnostic procedures to be carried out in Gibraltar.

Covid-19 is affecting the charities ability to raise the funds which means the purchasing of the equipment is delayed even further.

“This medical equipment utilises Medical Mapping Techniques such as the MRI and Ultrasound together with advances in fusion technologies to carry out guided prostate biopsies,” Mr Ghio told the Chronicle previously.

“There are many benefits in favour of Transperineal biopsies over the Transrectal biopsies such as, reduced risk of Infection; technique equally possible under local anaesthetics; higher detectable rates.”

At present a Prostate Cancer patient spends a minimum of three to five days in UK for this diagnostic procedure to be carried out.

The charity would like to acquire the equipment by the end of the first quarter of next year, to be used in Gibraltar.

“The prostate is a walnut-sized gland found only in men,” their Facebook page said.

“It plays an important role in reproduction by helping to produce the fluid in semen.”

“The prostate is the only organ that continues to grow throughout life. This can cause problems once a man reaches middle age. The earlier men recognise a problem with their prostate and seek help, the better the outcome of treatment is likely to be.”

Those wishing to donate can do so directly to the Prostate Cancer Support Group via its Just Giving page at http://bit.ly/PCSGJustGiving

Or people can fundraise for Prostate Cancer Support Group by setting up their own page and collecting funds which will be directly donated to them. This can be done by going to http://bit.ly/PCSGJustGiving and pressing the "Fundraise for us" button in the top right corner.