National Holocaust memorial can be built next to Westminster, minister rules

Artist's impression issued by the UK Holocaust Memorial showing the aerial view of the proposed Holocaust Memorial and Learning Centre in London. A minister has agreed with a planning inspector that the it should be built in Victoria Tower Gardens next to Parliament after the initial proposal was objected to by campaign groups.

A national Holocaust memorial centre will be built next to Parliament after a minister signed-off on a recommendation that the location would present a “powerful associative message”.

The Board of Deputies of British Jews welcomed the decision by housing and planning minister Chris Pincher, which came after local public inquiries were held in October and November due to the application being called in for central consideration. 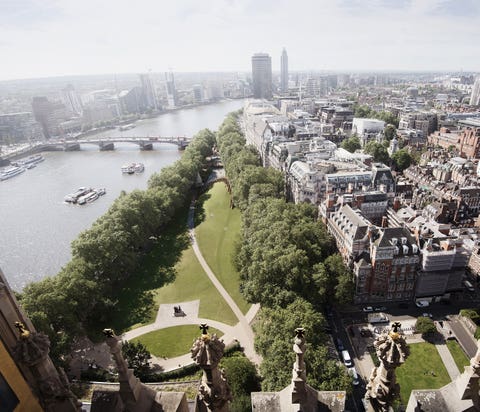 The proposal to build the Holocaust Memorial and Learning Centre in Victoria Tower Gardens, to mark the atrocities committed by the Nazis against the Jewish people and other minorities during the Second World War, faced objections from campaign groups.

But Mr Pincher agreed with planning inspector David Morgan that the “application should be approved”.

The Ministry of Housing, Communities and Local Government’s decision letter said the minister “agrees with the inspector that the location next to the Palace of Westminster would offer a powerful associative message in itself, which is consistent with that of the memorial of its immediate and wider context”.

It added: “The minister of state further agrees with the inspector’s conclusion that the location of the UKHMLC adjacent to the Palace of Westminster can rightly be considered a public benefit of great importance, meriting considerable weight in the heritage and planning balance.”

The report accepted that there would be a “modest loss of open space and functionality within” Victoria Tower Gardens but found the positives of the location outweighed the negatives in building the memorial there.

The letter, written by the planning casework unit and dated July 29, said the inspector had found alternative locations not to be suitable.

Mr Pincher agreed with the report that two other sites – Potter’s Field adjacent to Tower Bridge, and a site next to Millbank Tower – were “even more lacking in detail and feasibility, merit still lesser weight”.

Marie van der Zyl, president of the Board of Deputies, said: “I am delighted that the minister of state has granted planning permission for the memorial.

“As I said to the inquiry, there will be something uniquely powerful about locating a memorial to the Holocaust right next to the centre of the UK’s democracy.

“Whilst the Holocaust was a particular crime against Jewish people, the Nazis also viciously persecuted Roma, gay and disabled people, and this memorial will speak to that.”

The Government has already committed that the Holocaust memorial will be free “in perpetuity” to visitors when it opens, putting it on the same footing as the UK’s most significant museums and monuments.

Scheduled to open in 2024, the centre is intended to be the focal point for national remembrance of the six million Jewish men, women and children murdered in the Holocaust and all other victims of Nazi persecution, along with providing a place for reflection on “subsequent genocides”.

A total of £75 million of public money has already been put towards construction costs, with the investment due to be supplemented by £25 million from charitable donations.

A campaign group opposed to the proposals to build the memorial next to Parliament said it was consulting with lawyers before making its next move.

The Save Victoria Tower Gardens group, in a post on social media, said: “As you may have heard, today’s decision has not gone in our favour.

“We are deeply disappointed, and with our lawyers are now reading the full decision and considering our next steps.”

Coronavirus jabs rolled out for 12 to 15-year-olds