Northern Norway is one of the best places to snorkel with orcas.

By Sarah Marshall
Some call them sea wolves, others prefer the term killer. Claiming the broadest prey base of any animal, orcas have rightfully earned their reputation for being skilled ocean hunters. Yet respect for the apex predators has always been counter-balanced by fear: ancient mariners labelled them monsters and in Roman mythology, Orcus was a god of the underworld.

But despite a degree of mistrust, both fishermen and their foes have one thing in common; the same prize lures them to the cold, rough waters of the Norwegian sea.

Every year, millions of herring overwinter along the northern Norwegian coast having spawned further south. This protein-rich magnet attracts a procession of orcas, humpbacks, pelagic birds and - more recently - tourists.

Right now, slamming through waves on a RIB boat, I'm one of them. For years, I've been fascinated by the species - their intelligence, tactical hunting strategies and complex social interactions which we still don't fully understand. Observing from the surface is one thing, but so much more goes on down below. If even for a moment, I want to be part of their world.

Swimming with killers
Norwegian entrepreneur Rolf Malnes began offering orca snorkelling safaris in 1996, in the Lofoten Islands where herring returned for two decades to the same fjords. At that time, whale watching was a novel activity; getting in the water with these 'sea monsters' was - in many quarters - considered a death wish.

"I remember hearing a story about one fisherman who saw a pod of orcas approaching and pulled in his nets immediately, he was so afraid," chuckles Rolf, who admits he has no official background in marine biology, but has learned along the way.

His scientific back-up comes from cetacean expert Tiu Simila, who's studied Norwegian whale populations since the 1980s. Sharing similar tales of ingrained local prejudice and fear, she recalls using newspaper reports warning fishermen killer whales were in the area to locate their whereabouts and conduct her own research.

Beyond simple superstitions, there was an economic driver for these beliefs: herring stocks were depleting, and orcas were being blamed. Between 1979 and 1981, Tiu says 171 animals were killed in hunts partially subsidised by the government, until light bulbs illuminated and overfishing was understood to be the real culprit.

A moveable feast
Where herring go, orcas follow - forcing whale watching tours to shift operations accordingly. After several winter seasons in Tromso, the fish have moved north to fjords around the municipality of Skjerv0y. Between November and January, Rolf has chosen to base his company Lofoten Opplevelser out of the cosy Reisafjord hotel in Sorkjosen.

In December, when sun-starved days stretch into one long polar night, mountains loom like hulking spectres above the tiny, waterside village, which - conveniently - has its own airport. Flights from Tromso take less than 30 minutes, but run infrequently, generally requiring an overnight stay one way. (Accommodation in the aurora capital goes quickly, so I booked an Airbnb - a more convenient and economical option all round.) Otherwise, it's a three-and-a-half-hour journey by road.

My biggest fear? The cold
A latitude of 70 degrees north should plunge these fjords into a deep freeze, although the warming effects of the Gulf Stream keep channels ice-free.

But science had done little to ease my anxieties earlier that morning, as I squeezed into padded under-armour and a bulky dry suit. Clumsy gloves and a neoprene balaclava - which made me look like some sort of aquatic crusader - had prepared me for the worst. 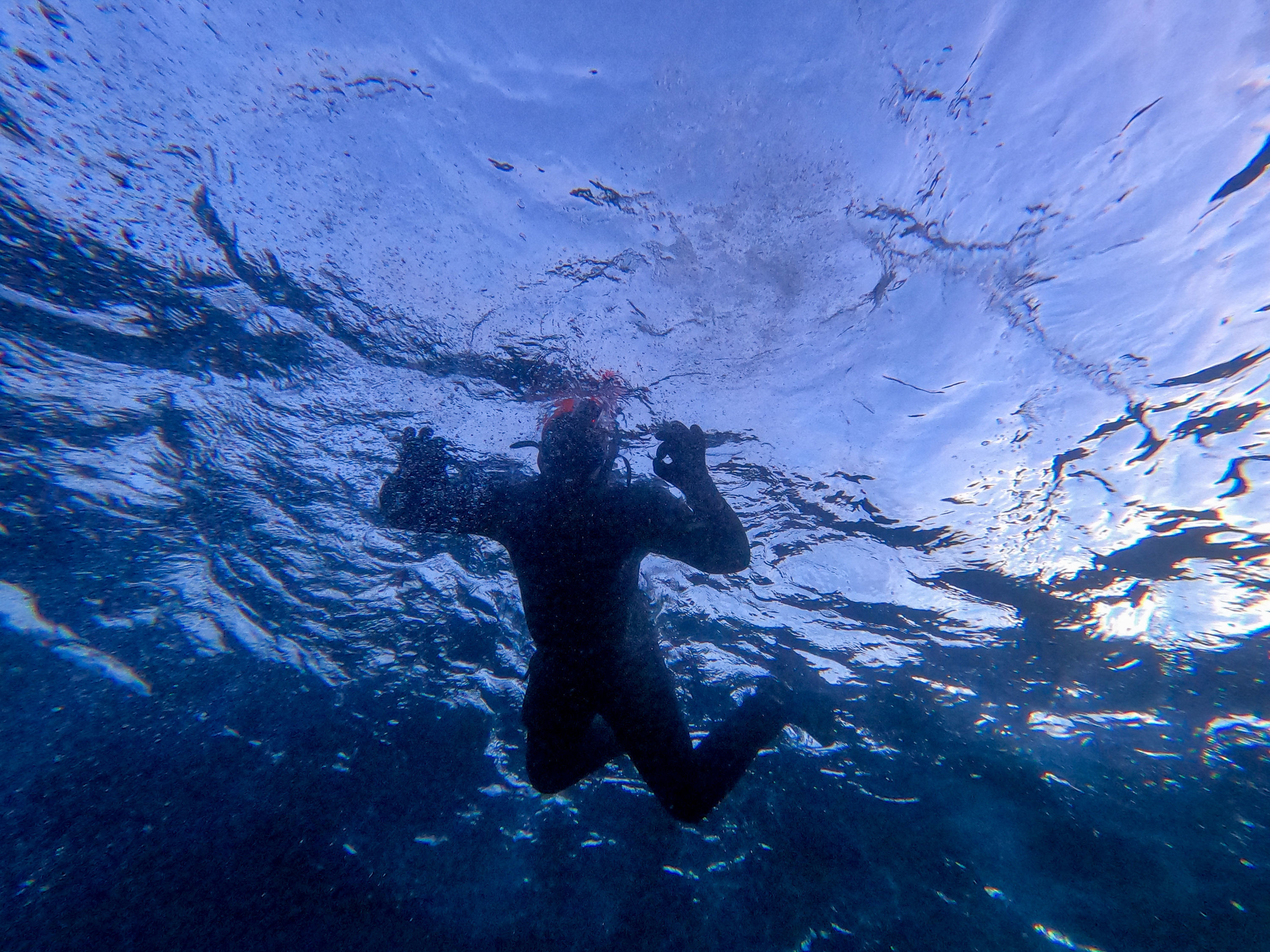 In truth, the water is a 'mild' 6C - hard to imagine from the discomfort of our sea spray-soaked 12-passenger RIB boat. Fine splinters of half-light groan from far below our jagged horizon, and waves blacker than a moonless sky swirl with the viscosity of oil. As blasts of hail pelt my skin like a rain-shower of steel nails, I begin to ask myself: why am I here?

That question dangles far longer than I'd like, as we search for a pod willing to accept our company. Rolf believes a successful whale watching encounter hinges on respect for the animals. "First of all, we need to read their behaviour," he insists. "If they go away from us, we have to wait."

Two times lucky
Orca safaris depart once per day, lasting around three to four hours - equivalent to the amount of twilight at this time of year. To maximise my chances, I've booked two excursions; no trip, says Rolf, is ever the same. 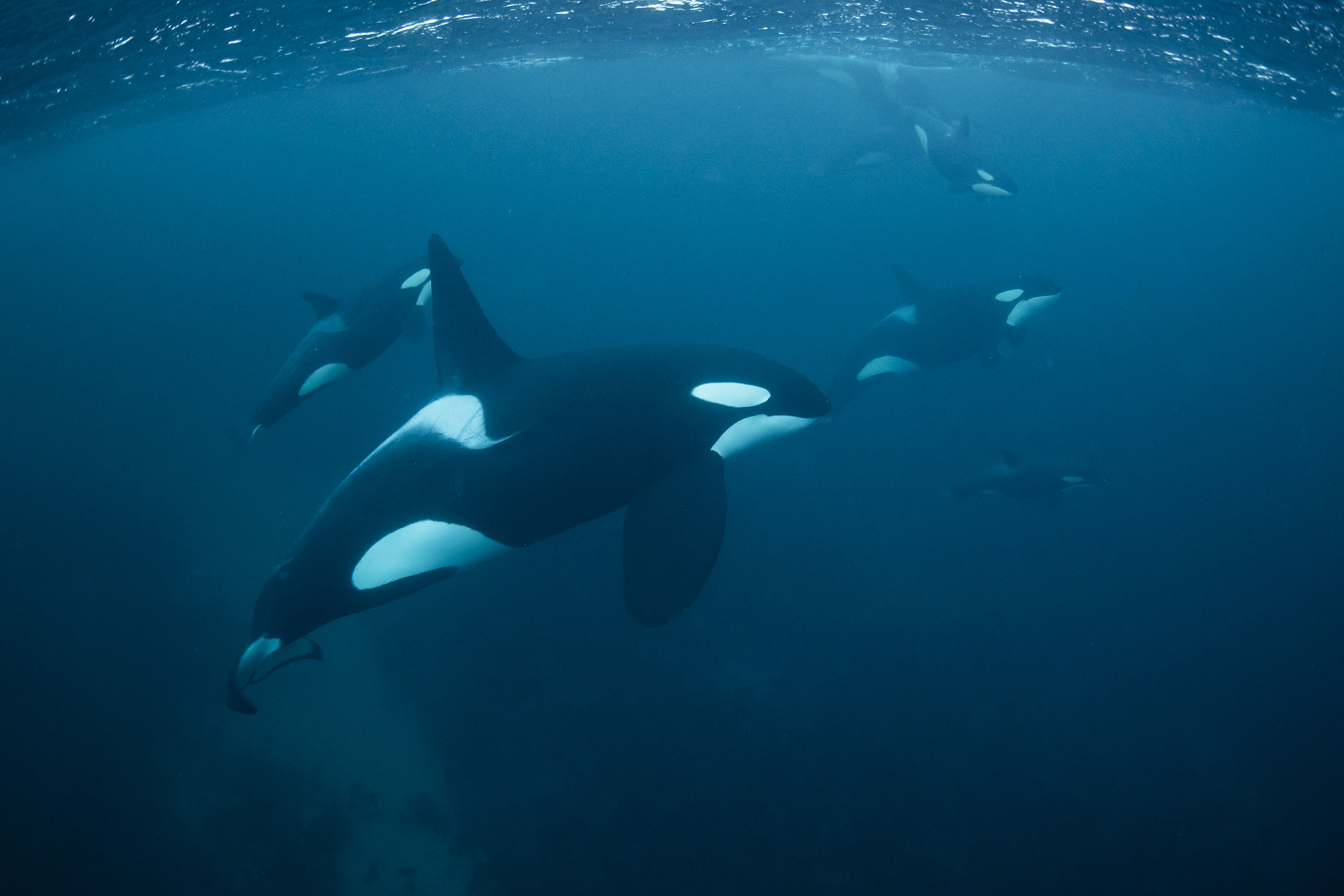 Multiple calves are born in winter, so it's not uncommon to see babies porpoising alongside mothers or playfully flicking their flukes in the air. Being so low to the water, we're at eye level with their dorsal fins as they slice through waves like butter.

But it's my second outing the following day that really delivers the goods.

Predictions of gale force winds keep most boats in the harbour, but any storm clouds have lost their puff overnight. During the commercial fishing season, smart whales follow trawlers, but with quotas met by mid-December (they commence again in January), the marine mammals find food for themselves. 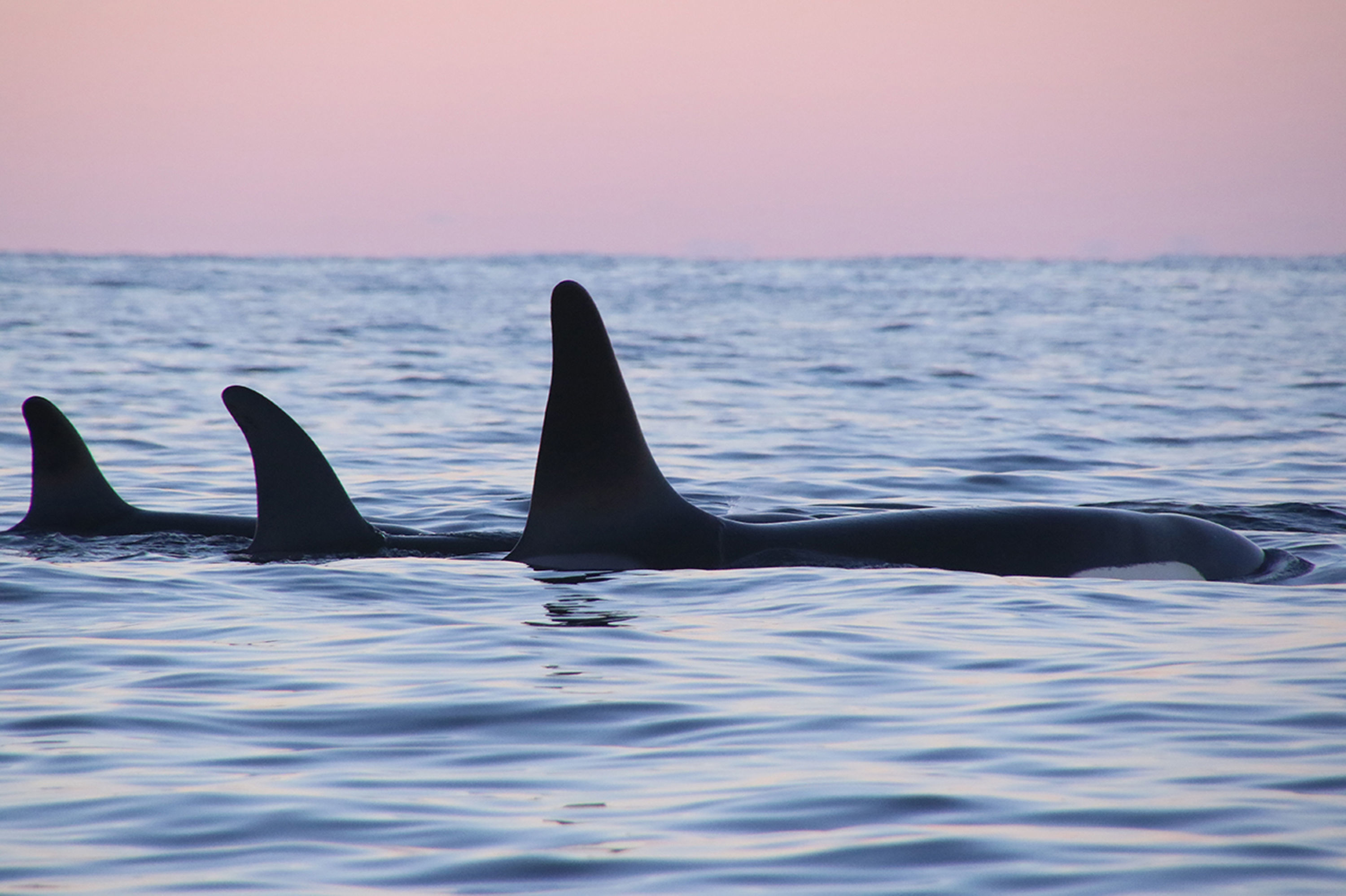 In low light and darkness, herring rise to the surface, and a flock of squawking gulls diving and circling indicate a feeding frenzy is about to take place.

Picking up pace, we fly alongside orcas as they surf over whitecaps, firing faster than bullets. Four colossal humpbacks soon join the party, waving their angel-white pectoral fins with glee. Amidst the chaos, with revellers happily distracted, Rolf tells us its time to get in.

In their world
Sharp and unexpected, the cold is breath-snatching - so too is the spectacle ahead. Flecks of shiny fish scales sparkle like stardust in an underwater universe, where orcas twist and turn with a mesmerising combination of athletic power and balletic grace.

Above the surface, fins slap and feathers flap chaotically, illuminated by a pillar box of orange light bleeding through the dark sky. Down here, it's slow and calm, allowing me to tune into the whales' communicative clicks, squeals and groans.

Anyone who's watched controversial documentary Blackfish, which recounts the sad story of captive whale Tilikum, might have reservations about getting into the water with these 'killers'. The truth is, there have been no reported fatal attacks on humans in the wild - and as I turn my head, I'm frozen in awe and wonder rather than fear.

Metres away, a humpback the size of a bus blinks at me; given excellent visibility, the ventral grooves beneath its chin are remarkably clear. We lock eyes for less than a second, but it feels like forever - and I know (to coin a cliche) this is one of those moments I'll never forget. 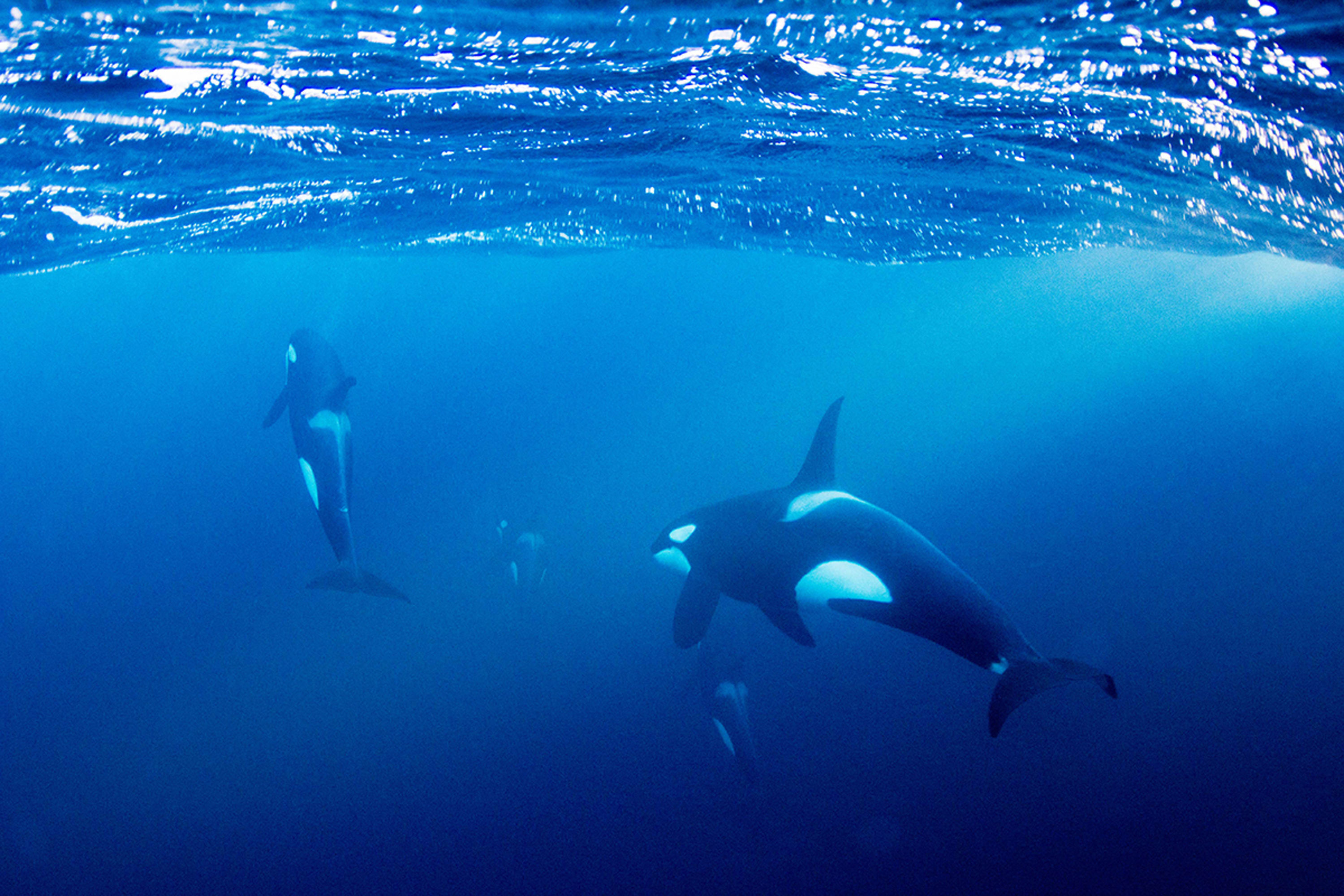 What happens next?
Although there are no guarantees, Rolf predicts herring will return to this area next season. A lucrative fishing industry also justifies detailed studies into their movements. Wherever they go, an increasing number of tourist boats will tag along - a topic of constant debate amongst veterans who've been offering these tours for some time.

Remarkably, there are no official whale watching regulations enforced in Norway, making it even more imperative to choose an operator who understands and respects wildlife. Because, as is so often the case, it's humans who pose the real dangers. Defying so many outmoded beliefs, these masterful marine mammals were simply born to thrill.
(PA)