Nelson’s Remarks: An Interesting Find at the Gibraltar National Archives

As part of Gibraltar Literature Week, the Chronicle is publishing book reviews daily. The event organised by Gibraltar Cultural Services includes discussions with local authors live streamed on their Facebook page and talks in schools. Today Anthony Pitaluga, Archivist and Head of The Gibraltar National Archives, shares his book recommendation. 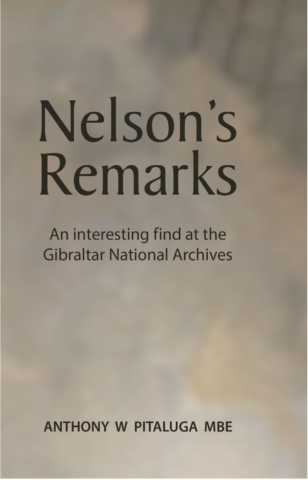 A book primarily about analysing historical documents to determine authenticity and authorship.

Generally speaking, a historical document is examined from three different aspects: historical, scientific, and stylistic. In this respect the book, in its endeavour to prove authenticity or otherwise, details the following aspects; provenance, identities, transcriptions, historical context, typography, linguistics, graphics, paper, handwriting and the local connection.

My investigations into this document have also brought to light the human aspects of those involved and how human emotion(s) – jealousy for example, can sometimes interfere with the exposition of the truth. The book contains an epilogue that contextualises the events that led Nelson to write his ‘Remarks’ in the first place.

Nelson was an extraordinary person, a larger than life character, a true leader. As is usually the case, extraordinary people act in extraordinary ways. The book talks of such extraordinary behaviour by Nelson in his unorthodox and decisive action in the Battle of Cape St. Vincent (Algarve Portugal) in February 1797, that led to a glorious British victory on 14th February 1797 when he was still a Royal Navy Commodore.

The final pages of the book, alludes to Admiral Jervis's (Nelson’s boss) official account of the victory at the battle of Cape St. Vincent, in which he fails to mention Nelson, Collingwood and others by name. Surprisingly the Admiral praises and names Sir Robert Calder, Captain of the Feet, on-board Victory, (Nelson was on-board HMS Captain), merely for having made signals in a very officer-like manner. This withholding of praise is remarkable given Admiral Jervis, on other occasions had expressed his admiration of gallantry and good conduct in the strongest and sometimes most extravagant terms regarding any action undertaken by Nelson, Collingwood, Miller, Berry and other British Officers.

The significance of the document relates primarily to Nelson’s fame as one of the most important characters in British history. An inspirational leader, his grasp and conception of strategy, and unconventional tactics, brought about a number of decisive British naval victories, particularly during the Napoleonic Wars. Nelson is world famous as every school child knows.

The document is also significant because it alludes to, and in fact is, full of praise for other important naval characters (known in Gibraltar) such as Captain Collingwood and Admiral Jervis, together with the famous flagship HMS Victory, very well known in Gibraltar, having limped into our port, badly damaged after the battle of Trafalgar in 1805.

Intended for the general interested reader, Nelson’s Remarks may also be useful as a starting point for those that wish to pursue a career within the archival sector. Recommended for secondary school age and above, and for those who wish to take their historical enquiries further.

Most of my citations derive from the Gibraltar National Archives public records repository, as well as from the National Maritime Museum Greenwich and the Hathi Trust. The Hathi Trust holds The dispatches and letters of Vice Admiral Lord Viscount Nelson, with notes by Sir Nicholas Harris Nicolas (former Naval Officer RN), originally published in London by Henry Colburn in 1844. It is a work in seven volumes, with annotations by Sir Nicholas Harris Nicolas. Volume two covers the period 1795 to 1797 which I consulted and assisted me in my final formulation and opinion.